Jáhkavarra (Jáhkarrá: [ˈjahːkɑʋɑrːɑ]), officially the High Chiefdom of Jáhkavarra (Jáhkavarrá Issohálga [ˈjahːkɑʋɑrːaː ˈisːɔhalːkɑ]), is a country located in the western Jaxukuk Sea, to the north of the Atsiq mainland. It encompasses the main island of Jáhkavarra Proper as well as several surrounding islands, collectively referred to as the Jáhka archipelago. Formed in 1931 as a loose confederation of largely independent chiefdoms united under an elected High Chief, centralisation efforts increased in the 1950s as the strongest constituent tribe, the Ruoŧŧa, managed to tighten their grip on power, transforming the union into a hereditary monarchy in 1973. Since the early 2000s, the country has stepped up its involvement in global affairs and is in the middle of a rapid transformation into a modern nation.

Jáhka, from which the name of the country, its language and its demonym are derived, is the Jáhkarrá word for "human" or "person". The suffix -varra means "land of"; thus Jáhkavarra is simply "land of the people".

The Jáhka archipelago lies between the continents of Miraria, Atsiq and Alpa, separated from each of them by approximately 1,000 km of open sea. It consists of one main island, connonly referred to as Jáhkavarra Proper, and several dozen much smaller islets, only the largest of which are inhabited. The Arctic Circle runs through the southern part of the mainland, which consists of two large landmasses connected by the Čuoikkas Isthmus. The geography of the western part is dominated by the Suoiŋa Massif, a mountain range that contains several active volcanoes and takes up more than half of the landmass, while to the east of the isthmus the land is mostly flat, rising only in the northeast to form the Neaččá Ridge. This clear east-west division has influenced Jáhkavarra society and politics since the main island was first settled.

The climate in Jáhkavarra is subarctic, with tundra covering most of the mainland. Trees are found only on the southernmost islands of the archipelago (Arrajietna and the Western Islands). Winter lasts from late October until April, and most of the surrounding sea freezes over during that time, with temperatures sinking as low as -45°C. Virtually all of the ground is permafrost.

The Treaty of Čuoikkas united the various independent chiefdoms of the island, establishing an island-wide government in Jávravuohtji, until then an independent city-state. True central authority remained weak, however, with the chieftains enjoying considerable freedom in governing their provinces. The office of High Chieftain was largely ceremonial and, although formally filled by election, was monopolised by the leader of the Ruoŧŧa clan, who administrated the richest and most populous province of Jáhkavarra. The election of Ruoŧŧá Vierra in 1962 marked the beginning of a different interpretation of the position, leveraging the economic and military power of the Ruoŧŧa over the other clans to steer the country closer to unification. The only notable resistance against the growing dominance of a single clan collapsed with the Veálgas Indicent in 1970. In the following year, the Constitution of Jáhkavarra made the title of High Chieftain hereditary to the Ruoŧŧa clan and furnished the ruler with far-reaching executive powers, although the other chieftains retain political influence through the Tribal Council which acts as a balance to a limited amount. 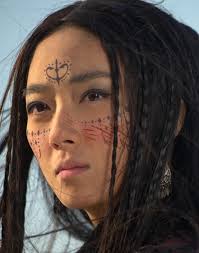 Head of state and government is the High Chieftain or Chieftess, who bears the title Issohká. Legislative and executive authority largely lies with them. A semi-democratic element is the Tribal Council, which can introduce bills and has the right to be heards by the Issohká, but has no constitutionally guaranteed legislative power. Its first chamber, the Council of Chieftains, consists of the sixteen provincial governors, who for most provinces are identical to the chieftain of the tribe the majority of inhabitants belongs to. The second chamber (Council of Appointees) is assembled from envoys from the provinces, which are not elected by popular vote but appointed by each provincial governor. The provinces differ in how strong the popular element is in influencing the composition of the Council delegation, but on the whole the Jáhkavarra political system cannot reasonably be called a democracy, not even on municipal level. Ordinary citizens of Jáhkavarra, unless they have ties to a member of the ruling class, have little to no say in how the country is run.

The tribal leaders are granted special rights in the Constitution to preserve their pre-eminent position, largely a concession to forestall local unrest in a country that still is a federation more than a unified federal state. While they are nominally subservient to directives from the central government, the detailed implementation of these is explicitly mentioned as the prerogative of provincial leaders. This makes the degree to which a High Chieftain can influence Jáhkavarra politics highly dependent on their ability to balance local and national interests and has in some cases proven to be an impediment to radical reforms. Since the passing of the Constitution, each High Chieftess has had her own way of working with the Tribal Council and has respected its status as an independent political identity to different degrees.

The current High Chieftess, inaugurated in 2014, is Rievča, the third daughter of her predecessor Jeaksarru. She belongs to the highly progressive, modernist faction of young and ambitious Jáhka politicians that seek to put an end to the fragmentation and particularism of their country. As Jáhkavarra involves itself more and more with other Sahar powers, the Issohká's political vision is sure to raise tensions among the established elites and their own designs on the country's future. The first four years of Rievča's rule have been characterised by regular clashes with the Tribal Council, which has repeatedly voiced its concerns about being marginalised in the light of the High Chieftess's frequent refusal to cooperate with the Council's wishes in regard to foreign affairs. 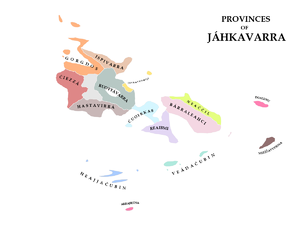 The administrative organisation of Jáhkavarra reflects the structure of its society. Administrative regions largely correspond with the territories under the control of a tribe, whose leaders agreed to form a federation in the Treaty of Čuoikkas, thereby securing their autonomy instead of risking conquest by the largest and most powerful Ruoŧŧa tribe. The provinces are grouped into three superordinate administrative regions based on geographical location.

In total, there are fourteen provinces. The capital, Jávravuohtji, is an administrative region of its own, together with the island of Ruoskás:

The closest foreign ally and most important partner is Achiyitqana, with which a free trade agreement has existed since the early 1990s. Achiyitqan nationals are the only significant foreign residents in Jáhkavarra, and travel between the countries is met with very few restrictions. Since the ascension of Ruoŧŧá Rievča to the throne in 2014, more than 2,000 Jáhkavarra citizens have enrolled in Achiyitqan universities, contributing greatly to the ongoing modernization effort on return.

Jáhkavarra is almost inaccessible to and largely untouched by international tourism, with very little of the necessary infrastructure even in the national capital. Only a few hundred foreign visitors are counted every year, most of them from Achiyitqana. Foreign language skills are still very much the exception among the native population.

Jáhkavarra is the only Atsiq country (besides Atameng) to be populated exclusively by humans, with very little dalar settlement even during the time of the Osveraali Empire. The archipelago was settled approximately 12,000 years ago by human groups, most of which moved on to the Atsiq mainland, and has never been colonised again since, although it was nominally a dependency of two foreign powers for most of its history. The native population, ethnically homogenous, is split into hundreds of clans that consider themselves parts of fourteen tribes, each tracing its lineage to a single female ancestor.

The only urban centre that qualifies for the designation is the capital, Jávravuohtji, which functions as the political, administrative, educational and overall cultural centre of the country, housing all international institutions and being the only place with a noteworthy presence of foreigners. The provincial capitals seldom exceed a few hundred permanent inhabitants and function mainly as trade hubs, doubling or tripling in size during the summer months when tribal meets are held. More than two thirds of the population still live as nomads.

Jáhkarrá, an isolate with no known links to any other Sahar language family, is the sole recognised language of the islands. There is little dialectal variation, but the speech of the wealthy elites of Jávravuohtji functions as the de facto standard. Very few of the natives speak any other language even to a limited degree. A small number of Achiyitqan speakers resides in the capital, most of them scientists or embassy officials.

The climate of Jáhkavarra is ill-suited to farming, with most of the land covered by a thick layer of snow for almost the entire year. All that grows on the archipelago is moss and lichen, far too poor in nutrients to sustain any amount of human population or their livestock. Where other countries can sustain their people on a plethora of crops, grown throughout the year and stored away for times of need, getting food on the table in Jáhkavarra for most people involves going out and killing it yourself - the knife, harpoon and rifle are the three tools every Jáhka, woman or man, is intimately familiar with. The larger cities such as Jávravuohtji or Čuoikkas are the only places where food can be bought in stores or consumed in restaurants, and even then the selection is narrow.

Foreign food is practically impossible to come by even in the capital, leaving visitors no choice but to try authentic Jáhka cuisine. The first thing one will immediately notice is the prominence of whale meat on the menu - the Jáhka have always been a seafaring people, and whaling is integral to their culture. Commonly hunted species include the minke whale (riepsa), fin whale (jáhháža), bowhead whale (suodno) and humpback whale (voska), as well as porpoises such as the beluga (riehtu) or pilot whale (njeapsa). The latter are killed in drive hunts (čuohčáža, lit. “great hunt”) where many villages team up, serving as important social events in addition to obtaining food for many households for weeks. Hunting whales out on the open sea is mostly done by men due to the dangers it presents, but both genders participate in the drive hunts and women, in keeping with their status in Jáhka society, frequently lead and coordinate them.

Fishing is of equal importance, and most Jáhka are well-versed in the fisherman’s craft. The rivers and seas of the archipelago teem with cold-water fish such as salmon (žiebbá), char (melgŋu), grayling (oastu), trout (sapsa), mackerel (ŧassa) and herring (viksa), and the Jáhka have been using them as a food source for millennia. Another staple of Jáhka cuisine are seals, most commonly hooded seals (loaksa), fur seals (žeápsa) and harp seals (ŧibba), which also provide pelts from which traditional clothing is made.

A very common dish in Jáhkavarra, so widespread that it might be called the national dish, is ruoŋes, a soup made from whale blood, pieces of blubber and whale meat. It is eaten together with dried seaweed (čoaggi) whose saltiness adds to the flavour. With the number of foreigners to Jáhkavarra increasing in the recent years, their horrified reactions to the dish have become a running gag among the natives, giving rise to the term ruohemmižža “blood soup face” for someone squeamish or easily offended. First-time visitors are often treated to a bowl of ruoŋes if available.