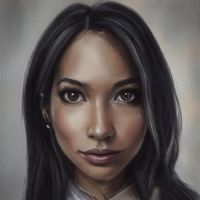 Dalas skin tones vary less than human ones, with most dalar having medium-brown skin. On the whole, the darkest skin colours are found in southern Atsiq, especially the southern coast in the Usuva and Qaelarne regions, and Tuanmali, with lighter skin predominating in northern Atsiq and Alpa. Dalar hair is usually thick and straight, and the most common hair colour is black or dark brown, which is also the case for eye colour. There are, however, several ethnic groups with lighter skin; the two most famous are the Lorhan on Alpa, mainly found in Sanmra, and the Atqlha minority of the Thaneqh region in southeastern Atsiq. The latter group is also well-known for their striking blue eyes, depicted for example in the portrait of the Osveraali Empress Sessicon I.