The country is named for its largest lake, Lake Goal.

The fungus Coccidioides immitis, which causes a lung disease known as Goal fever, is endemic to the country.

Prehistoric era: pinyon and acorn as staple foods in the south, semi-nomadism. shell middens along the coast. fals formerly widespread in the north and driven out of the coastal areas by humans and astalvi

'classical' era: confederation of human and astalvi city-states on the coast.

'medieval' era: Canangamese religion adopted in parts, an inland Prra-Blen (Old Trufji) speaking polity starts holy wars to subjugate the other inlanders for tribute, attempts to reach the coast but fails to conquer most of it. coast begins to unite into a few specific polities, with some independent city-states surviving

early modern era: export of astalvi goods and Astalva culture, iconography, exoticism to the world. unification of Goal into a single polity after the ascendance of the Megnjuiruex-dominant and Trufji-speaking western state (name TBD). discrepancy between the trade power of eastern and western Goal, caused by piracy, results in the first Goal Civil War. widespread conscription of freemen during the war results in increasing slave revolts.

The economy of coastal Goal is heavily based on trade. Historically, the coast served as a trading nexus between the rest of Nagu and Boroso, Akulanen, and the countries of the Draconic Sea. The interior, especially near Lake Goal, has a highly agricultural economy.

Coastal people are very urbanized, modern, multi-ethnic/multi-species. Wealth from agriculture (as well as other rural industries such as pottery) flows from the fields to the coast, and modern imports (both technologic and cultural) flow back to the agricultural areas. 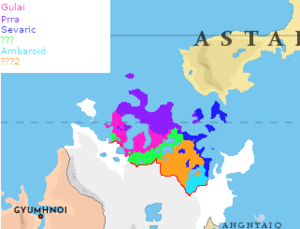 Distribution of the major language families within Goal

Multiple species live in the coastal cities of Goal. The species indigenous to Goal are humans, astalvi, and fals. Humans make up a plurality of the country, but the astalvi population is fairly high as well. The fals population is low, with a majority of fals being immigrants. There is also a small kav immigrant population.

Many different languages are spoken on Goal, including Prra, Sevaric, and Ambaroid languages. Most of the Gulai languages are endemic to the Lake Goal area.

Mablic is one of the official languages of Goal, and is used commonly in international trade and commerce.

Traditional funerary practices among the Gulai speakers are cremation, with the bone remains being placed in an earthenware pot and covered with a mix of water and spices, including anise myrtle and bay laurel.

Among most of the peoples indigenous to Goal, Datura inoxia is regarded as sacred and used in religious rituals such as the dayma festival, as well as a medicine.

Gulai ceramics were traditionally made in a tunnel kiln, with handcarved wooden tools being used to imprint distinctive patterns into the clay. Ceramics were such a specific skilled craft that entire villages would specialize in it. Today the remaining potter's villages predominantly produce wares for export to the wealthy cities of the coast, either for their use or for export onward to other countries.

Traditional basketry is made from Hesperoyucca whipplei fibers.

The Datura inoxia flower is a major symbol of the country, and the country's flag is based on a very stylized rendering of the flower.