The Hersheh palace or simply Summer palace is located in the town of Shanasagh, Ushghan. It was built in the 16th century by orders of emperor Qarsham II as a summer palace. The walled palace contains a Gharam, a vast garden, a cemetery and a ? along a vast complex of living quarters. The interior has been explicitily decorated to reflect the local style of the Koman Ghasharid architecture noted for its lack of tiles and extensive use of white colouring. 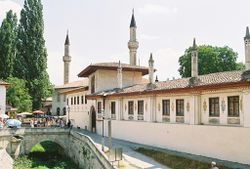 The front gate along a dried channel.

The Palace of Herseh was commissioned in 1520 by the Oshar dynasty under a selection of foreign planners supervised by the Koman architect Shehyanli, the palace and its surrounding buildings make up around 120 hectares, comprising of a Gharam, 85 hectares of gardens, a cemetery and a Pagan temple with a vast network of residences for the emperor's family and servants' quarters, along with a channel and a bridge in the main entrance, including a front courtyard and a fountain with decorative tiles.

Shortly after its completion in 1528, the palace became the preferred destination for a lineage of rulers from the Oshar dynasty until the dissolution of the Great Horde in 1657. In 1660 the village and the palace fell to Mishayan authority where it became a friction point against the Suryeh lineage of Samadar. Due to its lack of defences and geographic position, the palace changed hands several times and fell into decadence for the next 50 years, it wasn't until 1745, with the partial unification of the Oshar dynasty that the village and the palace began to prosper again. 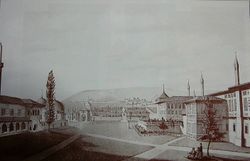 While still under the tenant of the Oshar dynasty, the palace has been converted into a museum and a famous tourist attraction, with the Gharam preserving its original use. Due to its 50 years of decadence, the original furniture along with some architectural features were lost during several lootings, as a manner of compensation, replicas of such furniture and a large-scale restoration was devised by the emperor in 1940.