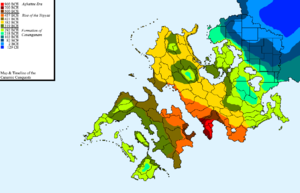 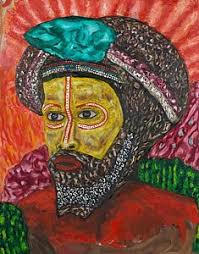 Kutuntsree as commonly depicted since the early 1st Millennia CE

Kutuntsree's early conquests were not limited to the mainland as at the same time of his mainland expansions, he had organized a second army under Ohyarantsree which in turn, expanded the boundaries of the city of Saku, mostly to expel local tribes which had raided the local farmland for several hundred years. This culminated in the Battle of Suttesa, where Ohyarantsree routed the Littoro tribesmen who were lightly armored against the Canamic heavy infantry. These campaigns were swift and involved the subjugation of the tribes which were led by Nultsrahtsree, wherein his own tribe was taken into slavery as the first annual tribute, while the other tribes would be forced to pay roughly 50 units of jade, as the tribes themselves were left devastated by the war and Ohyarantsree's slash-and-burn policy, meant to draw out the natives from their villages. Kutuntsree's conquests were successful, allowing him to begin further policies of expansionism for Cananganam, though his most notable action was his intent of twisting Canamic religion to allow for the introduction of a God-Emperor role, where he used his role as Great Speaker to become the oracle of the Canamic pantheon, wherein all religious authority was required to pass through the Speaker's word. As a result, his efforts to centralize and formally introduce a precedent in that he would disinherit his sons as he was proof of divine blood for his conquests, justifying his victories of proof of his infallibility as a descendant of the Sun God. Manipulating the religious and cultural significance of various sites, he has solidified his legacy within Canamic history. The most notable was his reluctance to commit to a hereditary system, and breaking precedence with previous rulers, said that he will reincarnate and that he will reincarnate within the Canamic lands, to lead his legacy further. Once this was achieved, Kutuntsree began the process of annexing the Littoro peoples on the main island of Cananganam, though his policies were initially harsh and received some backlash from citizens in Saku. While he'd refuse any acknowledgement of harm his policies he had, he did slowly reduce the harsh treatment applied upon the Littoro tribes. The tribes would eventually be annexed by 421 BCE while his successor while still a child.

Through religious fervor upon his death in 434 BCE, led to the discovery of a child believed to be the reincarnation of Kutuntsree, wherein he took the new name Turatsree, meaning to "act in a cycle". This era began with Kutuntsree's generals raising the child emperor as a conqueror, with emphasis on religious fervor being the main principle behind these policies and ambitions. Turatsree happened to be the perfect candidate as Turatsree was claimed to be around 2.25m tall, which through luck, managed to be the perfect symbol for such ambitions of Canamic unity. By the time he was 16, he was already leading his first campaign against the Sabhatsrihu dynasties in the northwest, securing more of the coastline. In combination of intending to achieve more than his predecessor had, Turatsree began the Second Shrenasahkarutsree, with the goal of subjugating all Camic lands to the North as many of his political enemies who opposed the religious system fled into their territories. During the Battle of Sufa, Turatsree led his men personally, and captured King Dhunharee in 412. Instead of granting mercy to the monarch as was customary in Asuranesian society, Turatsree had the King beheaded and the skin flayed to be a reminder to the Camics as to what would be expected if they resisted. This, however, led only to further resistance and the Ankitata Wars had begun, with the Camic kingdoms uniting against the self-proclaimed Canamic God-Emperor. The war would be bloody and some 150,000 are estimated to have died during the conflict, with entire cities being destroyed out during the fighting. In the end, the Canamic Emperor decisively beaten King Tacan, the leader of the Ankitata coalition. Turatsree, did not capture him, however, and the an uneasy truce existed for several years, before fighting once again broke out. For another two years the fighting continued, and it seemed the region would collapse to the infighting. The Camics, running out of soldiers and much of their people being affected by the war, invited the Gyailic peoples to settle their lands in return for taxes and militia levies for their war effort. This however, would be their undoing as the Gyailic tribes which settled formed their own kingdoms and refused to abide by the treaties agreed upon. As they realized their situation hopeless, they retreated all forces still loyal to them to the north of Sagghasa, where they were to make a last stand in the fortified region of Shvasah. Their resistance would last another 150 years despite the immense setbacks from the beginning of the war, and the loss of 70% of their territory and 90% of their population to Canamic occupation.

Turatsree himself led the repurcussions against the Camic peoples, but most notably awarded the Gyailic leaders for refusing the Camic nobles' demands, proclaiming their intervention as pre-planned on his part. As a result, many Gyailic leaders and landowners would be granted favorable positions of power within Canamic society, as they'd replace the now defunct Camic nobility. Turatsree, in effect, declared there would be five castes of Canamic society to apply to his now victorious situation. These five castes would be organized to determine the rights of all within his society, and to better create laws pertaining to his newly conquered subjects. Wishing to somewhat ease the tension that the now diminished Camic peoples had towards the Canamic lord, he accepted most of them as members of the free caste known as the Umbrha, which most Canamic citizens would also be a part of. For the Canamic based nobility, they would be the Ohyarantsree, while the newly added Gyailic nobles would be permitted to use the name Kegyai, itself a loanword from the Classical Gyailic language meaning "clothed person". Turatsree would then pursue a policy of slowly building a navy, intent on expanding his conquest upon the continent of Boroso, but would die of unknown means, with some scholars believing he died of either smallpox or malaria, but agree that it was likely a disease or poison to have been involved as many in the aristocracy were upset with the extent his conquests had gone, or were upset with his centralizing policies that threatened the Ohyarantsree's influence.