The history of Soltenna is very long and complex due to its long history of written records and centralized states. From the earliest writing in what is now Qonklaks through the Avite Empire's expansion from what is now Lugida, to the formation of the Soltennan Council, Soltenna's history is both a combination of domestic achievements and a microcosm of wider Sahar history.

Humans migrated from Ekuosia to Soltenna in two different waves. On around 50,000 BCE is the first wave migration, which arrived in Soltenna through the Terminian land bridge and modern-day Quaxin Xun. Following them is the second wave, which goes through the Veridian land bridge into Vaniu. This people group is ethnically distinct when compared to the first wave groups. The wave would then enter Soltenna from the east through Yerlan, after which the second wave populace are assimilated with the first wave peoples, creating an ethnic area of transition between the two migration wave groups on eastern Liosol and northern Kadya.

Situated between Lake Soltenna and the Amiyant Sea, the Central Basin is home to the region's earliest civilizations given its large swaths of fertile land, inundated by the Acre and Cuáma rivers. (Name) culture of Suvec runs on agriculture and date back to 5500 BCE, and is the oldest known neolithic settlement in the region. (Northern Riyan culture) is known to be the site to the earliest Basin writing system, with several carvings resembling pictograms discovered near the Leibhmobhn site dating as early as 4000 BCE. Of many of the known neolithic sites in the Basin, the (Sév) site is the most significant due to its abundance of Neolithic artifacts suggesting the site as formerly a significant, continuously inhabited settlement before a flood devastated the city.

The 4th millennium BCE saw the migration of two major people groups: Ngerupic peoples from Akulanen and Rietic peoples from mainland Soltenna. Evidence of their migration are primarily ethnolinguistic; the date they began expanding is thought to also be the time period when both groups' proto-language (Wa Ñi and Proto-Rietic respectively) were spoken.

Ngerupic peoples trace their origins to their ancestors from northwestern Magali, on the main island of Akulanen. They began expanding by sea out of the original homeland on around 3000 BCE, founding settlements as they hit land. Ngerupic settlements eventually spread across large swaths of Maritime Soltenna, going as far as Yachiro to the north and Terminia to the south.

Rietic peoples conversely originate from mainland Soltenna. In a widely accepted theory, the group originated from around modern Rogue and that early on in the migration, they expanded east to as far as Thedoka River. Basin inhabitants who comprise the Acre ethnolinguistic group on the other hand migrate west, some crossing past the Darkine.

The First Dynasty of Acre is the earliest recorded dynasty in Soltennan history, often regarded as the region's first civilization. According to Qonklese texts, the dynasty was described to have ruled between 1640 and 1310 BCE and ruled the area described as the "Land of the Two Great Waters", which includes modern Cuáma and Cuámbhail Province. Their capital is located on (Name) on modern Bruvlás. First Dynasties derived much of their state income from their large agricultural output, thanks to their network of irrigation systems and Acre riverside's largely fertile soil. New lands to the east became subject to First Dynasty's economically motivated expansion. According to most studies they expanded as far as (Déréig), but one Riyan study suggested they may have reached Kadya.

First Dynasty's reign ended on around 1300 BCE as the nearby Qonklese (Naame) Dynasty conquered the capital (Name), taking over the dynasty's original heartland in the process. However as a result, local chiefs of eastern First Dynasty broke off to found the Second Dynasty as they decline to submit to their new Qonklese emperor. 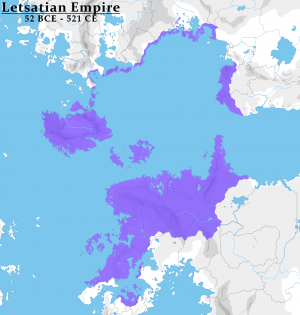 On 25 CE, Letsatia started to conquer Akulanen, thus beginning the Letsatian expansion into Miraria. Letsatia would then continue to conquer most of Akulanen lands and the Gulf of Sharkunen, turning the region into Letsatian colonies. During this period, Ekuosian influence in Soltenna flourished, and Soltenna saw a rapid growth in technology and economy. This period also marked the zenith of Ekuosian influence on Soltenna.

The conquests brought immediate attention from both Soltennan and Vaniuan empires and dynasties at the time. One extreme example is Qonklaks' Lou Dynasty. Under the fear of Letsatia eliminating or superseding Qonklese influence in Soltenna, the dynasty gathered representatives from Soltennan dynasties to gain support for a joint war against Letsatia. Included among these is Lugida's Altha Dynasty whose coastal area was lost to the empire. The dynasties unanimously decided to launch a joint war beginning in 90 CE. Military progress would remain stagnant on both sides throughout the war. Eventually the war exhausted most of the dynasties' treasuries, effectively sparking numerous internal conflicts within the dynasties which caused Lou Dynasty to break apart into five states. This marks the beginning of the dynastic system's decline in the Sharkunen basin in favor of the Letsatian system of governance.

Letsatia adopted Iovism on around 112 CE and it began to spread throughout much of the Sharkunen basin. Iovism was met with initial resistance from many people already adhering to their indigenous religions, including Yerlanis and Lugids. Iovism only began to be widely accepted on around 136 CE through its two branches. One is called Avism, which originated in Lugida near modern-day Kitlimis. It spread within Lugida, but remained confined in the region before the 3rd century CE. The other is Pauegism from Vaniu.

Peace of Galadrosia, followed by a series of civil wars across Letsatia-occupied Miraria, crippled the Letsatian Empire's influence and power in Miraria. Severe impact of the wars prompted Letsatian emperor Madrandas to end his support for the Mirarian colonization, until eventually the empire left Miraria almost completely on around 191 CE. By this time the former Letsatian lands in the Sharkunen Basin have broken apart into numerous empires ruled by indigenous people.