Difference between revisions of "Ikolinis"

Ikolinis (Thaaft: /ˈɪkɔlɪnɪs̠/) is the capital and largest city of the Fals Empire. It is the country's principal political and commercial center, and was so even before the Fáknir Republic broke away. Ikolinis is also the capital of the Ikolinian Kingdom (province), one of the Imperial provinces. According to the 2022 census, Ikolinis had 1.2 million inhabitants, with a metropolitan area of 2.2 million people. The city covers an area of 512 square kilometers (198 sq mi). The city was originally located on a small peninsula in a bay situated at the north bank of the Erivortla river, but intensive land reclamation efforts combined with urban expansion have made it so Ikolinis has expanded into previously submerged land, and encompass both sides of the river in the last four hundred years. The city lies at a distance of 35 km from the shore of the Gulan Sea, and ships have more or less direct access via the Erivortla.

Land reclamation efforts have been ongoing ever since the village was founded, and have gotten more encompassing as the city grew in wealth and population. While originally the area of and around Ikolinis consisted of swamps and riparian biomes, the channeling of the Erivortla river, subsequent drainage of surrounding areas, and walling of western shores of lake Ikol has created a large amounts of land suitable for construction and agriculture. 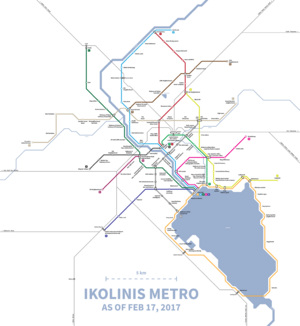 The face of modern Ikolinis is the result of centuries of growth, with the village of Ikolinis growing to gradually absorb and conglomerate with a number of closely spaced villages on the same swampy lowland it lies on, each with their own old town centers and neighborhoods, features that still stand out when viewed from above. Ikolinis is home to many famous examples of the eastern Fals architecture typical to the region. The Ikolinian cityscape has large remained unchanged since the early 1900s, with most visible growth happening at the peripheries. Inhabitants of the inner city, greatly reliant on tourism and catering, have opposed most proposed changes to the core's infrastructure and architecture throughout the 20th century, leading to a great degree of preservation of the original architecture.

This list is not comprehensive, and includes only the most popular places of interest. Examples include:

The part of the city on the northern bank of the Erivortla river, containing many of its most popular sites.

Fort is the neighborhood (or collection thereof) of Ikolinis south of the Erivortla. After the construction of a fortification on the southern bank in the early 16th century, a settlement gradually began to form around it.

Ethnic breakdown of Ikolinis as of 2022.

The majority of the Ikolinian population consists of As, making up almost 40% of its 1.2 million population. The native Ikolinians make up an almost equal share of the population, and the closely related Ikolians that inhabit the province in general are a significant minority. Increasingly over the course of the last century, the lines between As and Ikolinian/Ikolian identity within the city have become blurred, and many identify with more than one. This number is significant, however only one ethnic background is able to be chosen on the Imperial census (the law that brings about this exclusivity has been made more inclusive and will see effect by 2025, when the next census takes place). Farressets have inhabited the city for at least 500 years as well. As a result of its over 150 year long status as the capital of the Fals Empire, Ikolinis hosts communities of many Fals ethnicities. Fáknirs make up the largest "recent" minority, that is of the last hundred years, with around forty thousand residing all throughout the city.