Komania also known as the Imperial State self-designated as ( Koman: Mizarlahşah; Mizarlahşah [mʲizärlä:ʂä:]), is a sovereign state in Vaniua. With about 42 million inhabitants, Komania is the ?-most populous country. Comprising an area of 895,254 km2 making it the 4th largest country in Vaniua and the ? in Sahar. Komania is bordered to the north by the Melkanchuta lake, to the northeast by Ayozia and Kaatkukia, to the east by Balakia, to the south by the Great Khanate of Gushlia and Zinsha-Vogia and finally Ulvam and Vosan to the west, Komania is considered to be the country with most shared borders in Vaniua followed by Balakia and Vosan. The country's location in central Vaniua bordering the Melkanchuta lake along the flowing rivers of Braghak and Kashis give it geostrategic importance. Shanvan is the country's capital and one of the largest economic centres of the nation only behind Samadar.

The term Mizarlahşah meaning "Imperial State" was the chosen term to the unified Koman Mizarates in 1811, proclaimed as the "Imperial State" under the Tughanjuh, the "Tughan Treaty" of 15 January 1811. Historically, this term arose during the early 18th century already as a common designation for the lands comprising the unified Koman Mizarates. Choosing a name with no ethnic designation was also considered a strategic move by the Basher regime to force the inclusion of non-ethnic Komans. The name might be shortened to "Mizarşah" or "Mizar Şah" in unofficial documents. 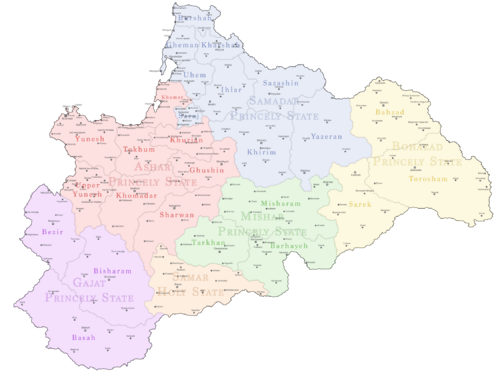