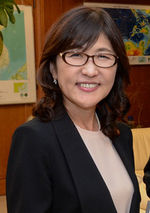 Eul Lana
19th prime minister
since 2019
Alotol election season comes only once every five years. A prime minister is elected during this process and the House of Status is appointed by the collective party votes of Liosol's population. The rest of the upper house is selected by the winner of the election. The next election has yet to be scheduled.

The current Prime Minister is Eul Lana, set to be succeeded by Pra Densok in September.