Mwamba-Sangmia has a population of over 94.1 million and an area of 576,964 km2 (222 767 sqmi) consisting of 27 provinces and 12 cantons, organized in three administrative regions. Rowṡäk Olboros IV has been Emperor since 1998. Its capital and most populous city is Ṡivowotü, located in the country's east. Other major cities include Pyivüüh, Tunnau and WIP++. Being a regional power, Mwamba has a history of independence not shared by its neighbours. Since the foundation of the first Mwamban state by Kheṡilisïg Żisâṡâwüd I in 789, the country has been ruled by a series of dynasties and clans, reaching its zenith under the Olboros dynasty. Though it was often fragmented, as was usual in Bavkir politics.

Mwamba-Sangmia is a comprised of two constituent countries and a special administrative region; Mwamba Proper is a constitutional monarchy with an elected congress and an elected Supreme Court. The Emperor of Mwamba holds vast executive and some legislative power, especially over the military, foreign policy and religious affairs. Executive power is exercised by the government, while legislative power is vested in both the government and the Congress, judicial power is exercised by the Supreme Court. The emperor can issue decrees which have the force of law. He can also dissolve the congress after consulting with the Supreme Justice; Sangmia is a technocratic directorial republic without clean separation of powers, which are split between the Sangmian Council and the Sangmian Congress. The Sangmian Council plus the Emperor and Supreme Justice of Mwamba together constitute the Summit of the Union which dictates foreign policy and directly rules the Union Port Region.

Mwamba is named after one of the Bavkir clans of the region, etymologically from Proto-Bavkir *mwëmbä'o which is reconstructed to mean 'orchid'

After the Collapse of the Second Bavkir Empire, in 1739, the Mwamba region was once again comprised of small polities ruled by the several mwamban clans. Being the southern periphery of the Bavkir empire, several regions of Mwamba had already been de facto independent for up to a century already, primarily inland and to the south. Notably, the Pyivüüh region was never part of the Bavkir Empire.

A cadet branch of the Terminian Olboros had married into one of the major Mwamban clans in the early 1700s. Flexing some of their economic power they managed to be recognized in the same terms as the native clans and were granted the right to duel for succession, as was customary for high profile marriages between Mwamban clans. They won all the relevant duels, fought by a particularly skilled Rosian swordsman and had their offspring be all officially considered part of the Olboros dinasty. This was initially not accepted by all Ekuosian Olboros, but by 1810 they would have been all legitimized. After securing succession, the Olboros abolished the Succession by Duel and established simple primogeniture. This lead to a noble revolt in 1733 but the Olboros managed to hold onto power. From here forward this Olboros Mwamban polity continued to expand, with some funding from the main Ekuosian branches of the Olboros and strategies and administrative techniques used by the Terminians to wage war in northern Ekuosia, until in 1793 they had unified most of the modern territory of Mwamba and termed themselves the Mwamban Empire. It continued to expand, conquering most of what is now Tuanmali by 1810. During this period, the Empire was close allies with the Setyal Empire, also ruled by a branch of the Olboros dynasty, albeit not without border tensions in eastern Sangmia. After the fall of the Setyal, the Mwamban Empire would move in and occupy Sangmia, which generated animosity with Dhwer and ?!?not!Vaamek.

The maximal extent of the Mwamban empire was reached in 1849 after Röwdis (born Hanu IV) conquered the Lestzi colony of !Khaaz, but this would also catalyze its demise in the following decades. In 1841, Hanu IV denounced his Ekuosian ties and renamed himself Röwdis, a native Mwamban name. This decision was taken out of pressure from internal politics, as the local lords constantly criticized the amount of power given to the emperor's ekuosian advisors, out of regional diplomacy, as they seeked to strengthen ties with the Setyal Empire, and out of interest in the resources of !Khaaz. This however backfired, as after the Setyal Empire collapsed in 1844 Mwamba was left without allies.

Without allies and overextended, the Mwamban Empire was subject to several revolts and insurrections in the following decades, in !Khaaz in 1860, Sangmia in 1861, Tuanmali in 1862. dalar forces seized Wicos and burned most of the Mwamban fleet in 1862, Sangmia managed to declare independence in 1863, and control over the !Khaaz region was lost in the following years.

In 1868, Mwamba was invaded by the Vosan fleet. Without much of a fleet and with a depleted manpower Mwamba could not resist the Vosan invasion, which employed then state-of-the-art ironclad ships. After the capital(i really need a name here) was razed, Mwamba signed a peace treaty that ceded a large amount of the Mwamban coast along with a several mile band inland for the next hundred years. As Mwamba lost its capital and most of the surrounding land, this is conventionally taken as the end of the Mwamban Empire. 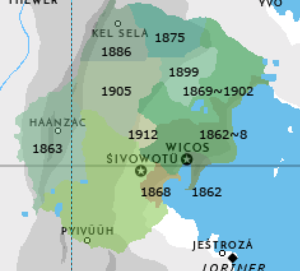 Dates of loss of various territories

While Mwamba has been losing territory since 1861, the Shattered Decades are traditionally considered to start in 1868 with the defeat to Vosan. After a crushing military defeat and the loss of some extremely core territories, including the then capital and most of their remaining coast, the structure of the Mwamban Empire was distinctly thrown into disarray. The period (1868-1932) is marked by centralizing and totalitarian policies enacted by Khesiklip II and Äräläżüp I without popular support or military power to actually enforce them.

The royal family moved to Ṡivowotü as an emergency measure in 1868 and would end up remaining there. In the years after the land was seized by Vosan most of the population of the region either left or was expelled by the Vosan administration, ending up primarily in Ṡivowotü, more than doubling its population and overextending all services then present. By the late 1870s very sizable slums had formed as living standards were compromised. Administration was plagued by intrigue between the royal family and the local Ṡivowotü nobility not managing to fix any of these issues until the urban reforms in the 1940s.

More broadly, the economy was greatly affected by the loss of all but one port and the imperial administration failed at addressing that, most edicts being aimed at the preservation of the cultural ideals of the Empire; adherence Pashaism was made mandatory, a comittee overseeing the Mwamban Language was formed in 1888 (which outlined the basis of Modern Standard Mwamban in the following decade) while taxes were raised and militias were established in the Kojuruv Highlands region to fund these initiatives. Those were not met with approval, as the local populace in peripheral regions of the empire increasingly saw neighboring coutries, especially increasingly functional Tuanmali as better alternatives and, ultimatelly, rebelled. Backed by Tuanmali and Dhwer, most of those rebellions ultimately succeeded and the Empire was fractured in a succession of secessions, starting by what is now Zūblej and Zhuldu Dzitīn Del in northern Tuanmali.

Pyivüüh was the first region to recover economically, as it was the gateway for land trade with south and west Boroso and, after the loss of the coast, it became the main trade hub of Mwamba. As it organized, the local elites became less and less satisfied with the central imperial goverment and secessionist movements began to appear in the 1920's, which greatly concerned newly appointed Äräläżüp II which doubled down on his father centralizing tendencies. The political compromise between Ṡivowotü and the Pyivüüh elites, negotiated by a minor royal family member that would become Emperor Röwdis II, resulted in the deposition of Äräläżüp II and the Constitutional Reform in 1932.

A particularly salient immigrant community in modern day Mwamba is the Awarahli Diaspora, which has established a noticeable presence in Mwambo-Sangmian urban settlements since the late 1980's. Several million Awarahli emmigrated during the Awarahl Civil War (1984-2009) and while the majority of them went to countries closer to Awarahl, both geographically and culturally, such as Quaxin Xun and Qonklaks up to 300 000 have relocated to Mwamba-Sangmia. A few factors made Mwamba an attractive destination for Awarahli refugees; The prevalence of pashaism at an official level attracted many of the most devout Awarahli who could not find a similarly warm reception in nearby countries. Another set of Awarahli saw Mwamba as their pathway into Lhavres; Lhavres restricted transit and immigration to and from the Draconic Alliance until 2002, as it was considered a kuulist organization. Quantitative data shows this accounted for a considerable percentage of them, as Awarahli immigration to Mwamba dropped considerably after 2002 even before the end of the conflict in 2009.

While initially treated as a stepping stone, most Awarahli never actually left for Lhavres, Mwamba boasts the fourth largest Awarahli diaspora community (after Qonklaks, Qua Xin Xun and Terminia) outside of the Draconic Allience. After establishing residence in Mwamba many Awarahli seem to have opened restaurants, and Awarahli cuisine experienced a boom in popularity in the late 90's after the tabloids "caught" then Supreme Justice NAME in an Awarahli restaurant in Ṡivowotü in 1996. More recent market research has shown that Awarahli immigrants are overrepresented in the restaurant and innkeeping businesses and this relative stability is probably why relatively few of them (if compared to e.g. Quaxin Xun) to go back to Awarahl after the end of the war in 2009.