The origin of the name for the continent of Nagu is a divisive topic and is subject to debate. One of the most popular proposed origins is from Cananganamese ñagū́mē meaning "crab of honey" or "sweet divine essence". 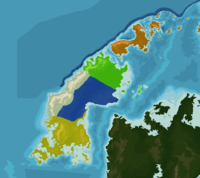 An approximation of the various geopolitical macro-regions of Nagu.

Nagu is traditionally split into five macro-regions; the Draconic islands, northern Nagu, southern Nagu, western Nagu, and the Hunal. These macro regions further split into distinctions made by geographic and political entities. Some of the most notable ones are the Rhasatsruksa mountains which separate Cananganam, Mujansa, and Ukutunajas; and the Kupriksruksa mountains which defines the border of western Nagu, the Hunal, and northern Nagu.

By definition, Nagu proper includes territories near mainland Nagu and within the Alpa-Nagu Plate. While Mbamigi is geopolitically part of Boroso, and both Danshapu and Chel Gyu are geopolitically closer to Soltenna, both are also included as part of Nagu as much of their territories are on the tectonic plate, placing it within the boundaries of Nagu proper.