Pfahfá (Fáknir: /p͡fax.ˈfau̯/) or Pfah is the capital and largest city of the Fáknir Republic, and before 2019 the second largest city of the Fals Empire after Ikolinis. Situated on the western shore of Lake Tiir, Pfahfá houses the seat of the Fáknir government and is a major hub for trade between Upper and Lower Boroso, with a direct connection to the TBR, and easy access to several important cities around lake Tiir. 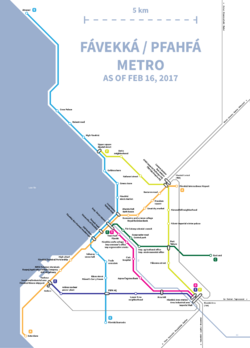 Pfahfá has a diversified economy, with traditional sectors, such as tourism, manufacturing, construction, transportation and communications, and new ones such as finance, research establishments, and specialist manufacturing industry, since recently also including semiconductor plants. Currently, the city's economy is still in recovery from the 2017-2019 civil war, which saw its large eastward sales market practically disappear until months after the end of the civil war.

Most of the inner city relies on tourism, and houses several well-established hotel and catering chains. Industry is largely centered around southern Pfahfá, where the city's harbour and largest rail station are also located. Many types of industry including metal, shipbuilding, and chemical plants are present here, as well as the Pfahfá Saranó Nuclear Plant operational since 2016.

After the Republic of Tiir, predecessor of the current republic declared its independence during the 2017 civil war, most Fáknir-owned financial institutions moved from Ikolinis to Pfahfá.

Agriculture and fishery play minor parts of the city's economy, but were until 1960 its primary types of employment. These economies, and its traditional manufacturing sectors, were historically centered around Pfahfá's regionally dominant market. The city used to be a prominent center for the trade of dyes and spices, and the manufacture of quality tools and metal implements.

Pfahfá has a predominantly Fáknir population, making up nearly 98 percent of its inhabitants. The largest minority are Aktari, the indigenous Fals of the area, followed by a small minority of As and Harals. The As community in the city has rapidly decreased during the 2017-2019 Fáknir civil war, who made up close to 10 percent of the population beforehand, many of whom were been deported during the war, or emigrated after.

Pfahfá is the birthplace of Pfahfáite or Western Eelgledism, Eelgledism, and is the religion of nearly all Fáknirs in the city, and of a minority of Aktari. Most Aktari adhere to their native religion. The city's Harals and As are both Eastern Eelgledists, but do not congregate together.