Rosland (Rosian: Rosźigè [ros.ʑigɜ]) officially the Democratic Republic of Rosland, is a country located in northern Baredina. It shares land borders with the Utol to the west, Azerin to the south and Veridia to both the south and east. The capital and largest city is Komy, which is situated on the mouth of the Komy River from which its name originates.

Rosland formed the core of the Letsatian Empire, conquering most of northwestern Eukosia and becoming its leading cultural, political, religious and economic centre. Its break-up saw one of its successor states, West Letsatia, continue to rule from the original seat of the empire until the sack of Komy. The ensuing chaos gave way to the establishment of the theocratic Ignizian Empire, which rapidly conquered much of the surrounding lands with the intent of purging heretical religions. Following the collapse of the Ignizian Empire, Rosland was united under a monarchy which fell in the Rosian Revolution. In the aftermath of Rosland's occupation during the Great Ekuosian War, a civil war broke out in which the Kúúlists declared victory.

Rosland officially describes itself as a self-reliant Kúúlist state practising a pure form of democracy, both politically and economically. However, it is internationally criticised as a totalitarian dictatorship, with the state security apparatus dominating the country and committing flagrant human rights violations. The economy of Rosland is centrally-planned, with an official state policy of autarchy dominating despite an inefficient economy, lack of self-produced goods, and little focus on non-military spending. 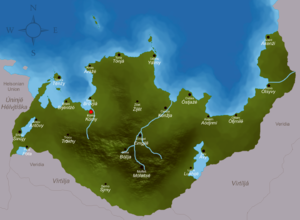 Physical map of Rosland with locations of major cities

The total area of Rosland is around 499,812 square kilometres, although it also claims the Veridian exclave of West Veridia which comprises an additional ??? square kilometres. The nation's constitutional borders (including claimed areas) were defined in 1853 following the overthrow of the monarchy. Rosland straddles the equator, lying between latitudes 6° N to 2° S and longitudes 7° to 19° E. The large majority of the country, apart from the coast, lies between 500 and 1500m above sea level.

In 2003, 72% of Rosland's area was forested, mostly rainforest and small areas of woody savannah in the far south.

Rosland is primarily covered by tropical climates, ranging from tropical rainforest in the north to tropical savannah in the south. Average temperatures throughout the year are very high due to Rosland's equatorial location, with the highest temperature ever recorded reaching 46°C in 2005. The region is extremely humid and receives large amounts of precipitation every year. 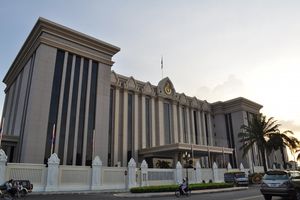 The People's Palace in Komy is the official seat of Rosland's government.

Rosland's constitution defines the nation as an independent revolutionary state "guided in its activities by the Kúúlist idea with Rosian characteristics".

Supreme legislative power is vested by the constitution in the unicameral Supreme People's Assembly, which is elected for 8-year terms by the Council of National Defence and the Provincial People's Assemblies. All of the assembly's 230 legislators belong to the Kúúlist Party of Rosland, which is the country's sole recognised party with an estimated 8,000,000 members. The SPA's official functions include electing the Premier of Rosland, voting on legislation, establishing domestic and foreign policy, and reviewing the state economic plan. However, without the ability to introduce laws itself, the assembly acts as little more than a rubber-stamp for the decisions of the Kúúlist Party's inner circle, an informal institution whose members are chosen through a secretive internal process. The only aspect of Rosland's legislature which is directly elected by universal suffrage are the Local People's Assemblies, which oversee small municipalities of between 10,000 to 100,000 inhabitants.

Executive power is held by the Milamorno (sometimes translated as president or supreme leader). The incumbent is Ótavjny Manźú, who has been in power since 2007. He is the head of state, Chairman of the Kúúlist Party of Rosland, and Supreme Commander of the Rosian People's Army. The Milamorno is officially elected by a popular vote every 8 years, although the last time that more than one candidate appeared on the ballot was in 1975. The process for deciding whose name appears is largely through internal deliberations. 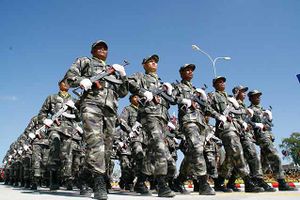 Rosian troops on parade near the Veridian border

Rosland was a founding member of the Kúúlist Bloc and the International Congress following the Great Ekuosian War, and consequently enjoyed a close relationship with other Kúúlist countries, most notably its neighbour, the Helsonian Union. However, since the collapse of the USHR in 2005 Rosland has found itself increasingly estranged from the international community. Rosland has consistently denounced the Ekuosian Union, and has recently escalated tensions with Veridia due to their long-standing conflicting claims to the West Veridia region.

The DRR spends an estimated 15% of its state budget on its military, equivalent to around $1 billion annually. Up to 30% of the Rosian population are enlisted as full-time or reserve soldiers in the People's Army, which is by far the highest rate on Sahar. The government has come under international fire for prioritising the military budget over the welfare of its citizens.

The military holds an important role in the function of Rosland's government. Soldiers are entitled to elect the Council of Defense, which appoints 80 members of the Supreme Assembly from the military command.