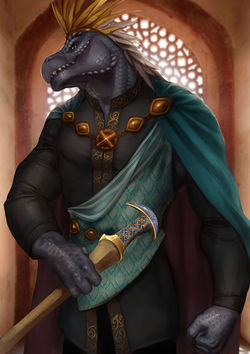 Emperor Vaykir hatched in Ikolinis and is the eldest living child of the previous Emperor Eeti II and Farresset judge Lakiaru Urlisuj. She became Queen Consort of Ikolinis upon his father's accession as King of Ikolinis on 2 January 1989. He succeeded Eeti following his death on 20 September 2015.

Vaykir went to public primary and secondary schools, and studied law at Kúri University. He married Luuveg Tratral in 2010, but she died in a car accident in 2011. In 2013 he married a second time, with Keku Andiistok, and they have three children: Eeti IV and Álar of 2016, and Wang of 2017.

Vaykir has one younger brother, Eeti III, and four younger sisters, Ruun, Ütumir, Pólinen, and Šatar. He had one older brother, Brel, who was heir apparent to the throne but died due to a drug overdose in 2012.

In his free time, Vaykir is interested in swimming and metalworking. He has been swimming from a young age, and since a few years has partaken in regular swimming competitions throughout the capital province. After his accession to the throne, he became a member of the Sahar Sports Society. Vaykir was also an apprentice blacksmith until his accession. At the age of 27, he is currently the NUMth youngest monarch in Sahar after NAME.

Vaykir Abireeti Fasiltár hatched on 21 January 1991 in a cottage on the grounds of the Royal Palace in Ikolinis, Fals Empire. He is the second child of the late Emperor Eeti and Queen Lakiaru and a grandchild of late Emperor Ralled and Queen Ruun. At the time of his hatching he was mistakenly found to be lifeless for a short time, but after an hour he started showing signs of life and was re-diagnosed.

Vaykir attended Eel Tanir Elementary School in Ikolinis from 1998 to 2003. He went to two different secondary schools: the Aurohunen Middle School in Aurohunen from 2003 to 2004, and the King Niftüi Gymnasium in central Ikolinis from 2004 to 2007. Vaykir studied Law and later also Accounting at Kúri University from 2007 onward and received his MA degree in 2012 has received in-service training at various universities since. It was also in Kúri that he met his future wife Luuveg Traral, then an intern legal advisor of a local water management projects company, whom he would marry in 2010.

In 2011, at the age of 20, he survived a severe car accident in Cerman, with lacerations covering the entirety of his chest and part of his left upper arm, but recovered relatively quickly. His then-pregnant wife Luuveg did not survive the accident. In the months after her death, Vaykir is noted to have become increasingly disagreeable and disheartened, and spent most of his time segregated, focusing on his studying or working. After successfully graduating from his studies in early 2012, Vaykir worked at two Kúri-based small law firms for a short time. Later that year, his older brother Brel died from a heart attack as a result of a cocaine overdose. This prompted Vaykir to retreat back to the Fals Empire. Vaykir, being only two years younger, was especially close to Brel, and knew about his drug-related problems. As Vaykir was in the process helping Brel cure his addiction without outside assistance, he never informed his family about it. After admitting this to his family when Brel died, he was overcome with strong guilt.

It also caused problems in the monarchical structure. With Brel's death, Vaykir was next in line for inheritance of the throne after his father, but his shame was such that he announced he would deny his claim. This meant that his younger brother Eeti would become the formal heir. Due to continued friction between Vaykir and his father over his decision, contact between them became minimal. In the end, his father accepted Vaykir's refusal, and from then on he largely disappeared from the family's image.

After spending several months secluded grieving and in depression, Vaykir returned to work in Ikolinis. In 2013 he married a second time, his wife [[Keku Andiistok] being also a lawyer. After gaining experience working for a well-known Ikolinis law firm, he founded MOAFA Intakig Ldv. Lawyers together with three partners, including his wife, in 2014. Since then, Vaykir has primarily focused on advising and litigating in the field of obligations law, insolvency law, and media law. He also has experience in cases concerning unlawful publication, libel and slander, and rectification/reparations. In his line of work, Vaykir has been invited to speak at parliament hearings about freedom of expression bills on two occasions.

His contribution to the company was short-lived. The sudden death of his father Eeti II on September 20, 2015 due to unknown reasons threw the family off-balance. Vaykir was called upon to arrange the ceremonies and was expected to provide support for the family, for which he took an extended leave of absence. During the entire time, his mother states Vaykir was almost unapproachable and would reject personal or sentimental conversations. She later described him as "bitter", and also notes that he gradually became more "unfiltered" and "insensitive", and that it affected his relationship with her as well as with his wife in a negative way.

Emperor Eeti was buried in his ancestral town Fasilát on September 23, 2015 in strict privacy. Soon after, preparations were made for Eeti III to be inaugurated. While he showed enthusiasm for the position towards his family, and in interviews with various media, he approached Vaykir one evening and expressed that he was instead full of hesitation and apprehension. Two weeks before the inauguration, Eeti III and Vaykir had a long-lasting discussion behind closed doors, and it was later revealed that Eeti had asked him to take over the position of Emperor. Eeti tried to convince him by saying among others, that he wasn't ready, he was 20 years old and occupied with studies, had difficulties with his social skills, and wasn't "stress-resistant" like Vaykir.

Vaykir was conflicted about Eeti's plea but accepted the offer a few days later. The royal family disagreed entirely with the switch and attempted on several occasions to exclude Vaykir and convince Eeti to reconsider. Their sisters were especially vocal about their disagreement and reportedly physically removed Vaykir from the family home after Eeti announced his decision; but their appeals, even formal ones, were to no avail as there had been no formal transgression. However, by Imperial law, such a change in sovereignty required that the acceptance of Vaykir be determined by a referendum, which was consequently held between October 13 and 20, 2015. To everyone's surprise, the outcome indicated a rating of 82 percent in favour of Vaykir's acceptance.

This resulted in his family breaking contact with him entirely, formally because they believe Vaykir manipulated Eeti III into renouncing his claim, but Eeti later protested this by breaking ties with his family and coming out in support of Vaykir.

Vaykir was crowned in the New Temple in front of the joint assembly of the House of Conference and the temple high-priest on October 27, 2015. At his accession at age 24, he was Sahar's NUMth youngest monarch.

Due to the conditions of his Emperorship, he was forced to resign from his previous occupation as an advocate. However, as he is still listed in the registry of the independent but state-recognised CLA, he may still offer legal counsel and services provided they are not commissioned and pro deo; and has done so on multiple occasions.

He also became a member of the Sahar Sports Society in 2016, where he is one of the directors for the water sports as well as the honorary representative of the Fals Empire.

Since his inauguration, Vaykir has taken a quasi-active role in politics. Most of his involvement has been on high-profile events with potential international significance. His political decisions have caused both controversy and agreement, and are characterised by conservative or Fals-partisan undertones. He has been considered harsh, unfair, and prejudiced by his critics. For example, shortly after his inauguration, Vaykir began advocating on behalf of oppressed Fals minorities around Sahar, presenting outlines of plans to the government and exercising pressure to get certain law proposals passed that would "shake up" the Empire's foreign policies, especially in relation to countries where slavery of Fals was legal, as well as nations that were part of the Sahar Socialists Agency. These policies, after amendments were made, were passed in the November 2015 Act. It lead to strained relations with several nations, but was ultimately effective in accomplishing its intended targets.

Vaykir played an active role in the Pthalk Conflict of 2015. After the Imperial Government intimidatingly proposed to buy out parts of the Pthalk archipelago from Dhwer with Fals-majority populations, the Dhweran government responded with increasing its military presence there and the deportation of parts of the Fals population to mainland Dhwer. A period of high tension came about which reached its peak when parliamentary discussions spearheaded by Vaykir resulted in the Empire demanding that Dhwer cede the aforementioned territories to the Empire, backed by a naval blockade of the main island as leverage, which lead to civil unrest there. On several occasions, this blockade put the Empire at the brink of war with Dhwer. Not long after, government officials of both countries, to avoid such a war, organised peace discussions which were held in Bavkïrak, a neutral location. These were cut short after a terrorist attack killed several members of the delegations, and the peace talks were put on hold. Shortly thereafter the civil representatives of the Fals and human inhabitants of the Pthalk archipelago organised a joint provisional government and declared their independence from Dhwer on May 3, 2016, and declared their intent to refuse any future attempts to be incorporated into either country. This act ended the conflict and created the Joint Republic of Pthalk.

Vaykir relieved Fáknir separatist politician Jálawk Spákdo of his post as High Elder (comparable to a president) in his provincial parliament on February 8, 2017 after the motion was rejected in the Imperial High Court. This caused unease between the political establishment and him, and a feeling of disenfranchisement of many Fáknirs, which culminated in protests and riots in Bastaren with over 250 reported injuries. Critics of Vaykir's involvement say this perhaps instigated the 2017-2018 Fáknirland civil war that followed, while others say it was only "the drop that made the bucket overflow".

Contrary to his regular political involvement, he recently supported and finally ratified a law that was proposed by High Elder Oodun Abirsimur, removing the restriction on the construction of temples and places of worship for religions other than Eelgledism. This mostly affected humans, but also non-Eelgledist Fals. This law was revoked in March 2018 by a nation-wide referendum.