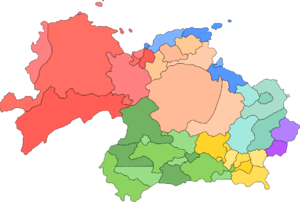 Political divisions (also referred to as administrative divisions) of the Liosol are the various recognized governing entities that together form the Sovereign Kingdom of Liosol. The first-level political (administrative) division of Liosol is a cale, of which there are thirty-eight. The federal cities of Belfan (more commonly known as Alotol City) and Lanothi are included in this category as well, but are not considered part of the cale grouping.

Each state has a non-classified municipality which serves as its capital. The governor-general of the state manages this city.

Official government websites list the following as official territories of Liosol, although some may be disputed:

Liosol has missions and embassies in every country except Dhwer due to reports of inhumane acts in the state and Liosol recently foreclosed its embassy in Gushlia due to territorial anomalies.