Bothania is governed as a unitary democratic republic under a parliamentary system of government. The Bothanian state operates under an uncodified constitution spread across several Fundamental Laws; the conventions of legislative supremacy form the de facto highest principles of Bothanian constitutional law, namely that the Great Law Courts can make any law on any subject, no valid Act of the Courts can be questioned by a judicial tribunal and no Courts can pass a law that cannot be amended or repealed by future Courts.

The President of Bothania is the head of state of Bothania and is elected to a single, non-renewable seven-year term by an electoral college consisting of the deputies to the Great Law Courts and an equal number of ex professo delegates. The President formally acts as commander-in-chief of the Bothanian Self-Defence Forces and represents Bothania abroad, though these powers are normally exercised on the advice of the Prime Minister and the Council of Ministers. The President does, however, have personal discretion to propose bills to the Great Law Courts, call referenda on legislation, and call a referendum on the early dissolution of the Second Chamber: a successful vote results in the dissolution of the Chamber, while a failed vote removes the President from office.

The Council of Ministers, led by the Prime Minister, is nominated by the President and must be confirmed by and maintain the confidence of the Great Law Courts. The Council is charged with executing the domestic and foreign policy of the state. It directs and co-ordinates the work of government institutions and bears full responsibility for all executive acts of the national government, including those formally exercised by the President. The Council must answer to the Great Law Courts for all executive acts and policy decisions and may be removed by a vote of the Second Chamber.

The Great Law Courts form the bicameral legislature of Bothania. The Courts enjoy legislative supremacy and have the power to supervise government activities through its committees and pass any law they wish by a concurrent majority. The Second Chamber is the lower and more powerful of the two chambers and consists of 500 delegates directly-elected by open list proportional representation using the D’Hondt method. Sitting for a term of up to four years, the Second Chamber is the body from which most legislation originates and possesses the power of the purse, the sole power to invest and dismiss the Council of Ministers and the right to declare war and peace on behalf of Bothania.

The First Chamber is the upper house of the Assemblies and a largely corporative body, representing the interests of various sectors of society, as well as top members of the judiciary. The First Chamber has the power to delay legislation, but lacks veto power; decisions and amendments made by the Chamber can be overturned by a joint sitting of the Courts. The Chamber’s status as a non-partisan body and its insulation from public opinion gives it the power to act as a chamber of sober second thought and gives the body a more collegial atmosphere than its elected counterpart; as the Council of Ministers does not need to rely on the support of the First Chamber to remain in office and cannot rely on its automatic support, the Council commonly faces more serious scrutiny in the upper house than the lower.

Bothania maintains a military force with x active and x reserve personnel, built around a defence policy of deterrence and non-interventionism. Divided into the Army, Armada, Air Force and Guard, the Bothanian Self-Defence Forces are headed by the President as commander-in-chief, the Minister of Defence as representative of the Council of Ministers and the Defence Staff appointed by the President and Minister. The armed forces operate under a policy of conscription, with all Bothanian males and females (including those with dual citizenship) over the age of 18 required to serve at least twelve months in the military. Deferment is available for those entering higher education until three months after graduation, while conscientious objectors and persons with inadequate health are permitted to do eighteen months of alternative civilian service instead of serving in the military, such as in the police, fire department, education, public hospitals, homes for the elderly or international humanitarian service.

A candy stall in Tom

Lamb, beef, goat, chicken and seafood form the base of the Bothanian diet and are commonly prepared with vegetables and starches in a soup or stew fashion or are salted or pickled, especially in the desert interior. Food stalls are popular around the country, often selling confectioneries or meat-based street food. 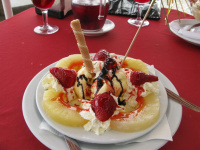 Ice cream and fruit served as dessert in Brasto

Bothania has a long and storied confectionery tradition dating back to the recording of fruit pastry recipes by Iovist monks in the third century CE. Bakers’ confections such as pastries, tarts and cakes are staple desserts across the country, while Bothanian chocolate and sweets are widely appreciated. Ice cream is also commonly eaten as a last course and is traditionally accompanied by fruit and a cup of coffee.

Association football is by far the most popular spectator sport in Bothania and is traditionally considered the country’s national sport. Governed by the Bothanian Football Federation, the Bothania national football team competes in in international competitions such as the SIFA World Cup. Clubs compete in the Bothanian league system, which is headed by the Bothanian Championship, as well as the knockout Bothanian Open Cup. Football’s main competitors for viewership are rugby, handball and volleyball.