The Calsean War, also officially known as the First Angatsa War in Cananganam, was a multi-year armed conflict between Mujansa and Cananganam over the territory of the Calsean Kingdom. The war was caused primarily of Cananganam's determination to secure its border along the Rhasatsruksa mountains, a region known for its deposits of copper, silver, and occasional gold. With the rise of industrialization and globalized trade, the demand for silver and gold had increased significantly between the 18th and 19th centuries as a result of its value in the Ekuoso-Mirarian powers. Most notably, silver deposits within Simphri had started to dwindle as a result of the mines' increased exploitation over the century. This combined with increased nationalism in Cananganam and Mujansa led to their mutual intent to secure the mountains from the other.

The regional conflict quickly escalated with Mujansa's army sweeping through in its southward campaign to the vital port of A which was supplying the armies in Calse. The siege of the port was a focal point of the war and had managed to obtain observers from multiple nations coming to the city to observe the fighting while also being a topic in many newspapers being itself an interesting spectacle and a cause célèbre of Cananganam's struggle.

In the waning days of the conflict, the fighting had come to a stand still with no major victory for both sides and with both nations wearing and risking insurrection, a peace was granted that resulted in Cananganam's annexation of the petty kingdom, while Mujansa obtained several key islands off its coast granting it a much need secure trade route. The conflict saw some of the first use of trench warfare and the decline of the shortly existent rank and file tactics of Naguan warfare.

In late 1875, the Mujansan republic had managed to secure the two kingdoms of Thākvosā (in March) and Śamisā (in July), while the kingdom of Calse remained wedged between Cananganam and Mujansa. The Calsean kingdom predominantly spoke a dialect closer to Anchashi, which had let many in the Cananganamese leadership to believe that the kingdom would seek accession into the Mujansan government like the others. In preparation for this, Cananganam began to prepare the army to seek to quickly besiege and subjugate the kingdom before Mujansa could intervene. In the meantime, efforts were made to raise a second army for when Mujansa would eventually join the war. 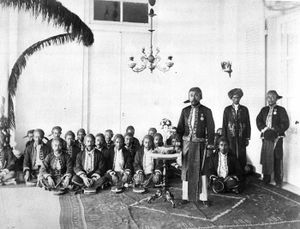 Members of both the Cananganamese and Mujansan governments after signing the treaty on May 9, 1879.

The war had serious repercussions for both Mujansa and Cananganam, as both nations lost almost 2% of their adult male population in the war. This created a serious disruption in both countries' economies as a recession followed the war's wake. This was countered by a second gold rush in the Rhasatsruksa mountains several years after the war, though this gold rush was very much uneventful in comparison aside from individuals seeking to obtain quick wealth from their early finds and the benefit both countries received from it.