This article is about the modern-day sovereign state. Not to be confused with Vosan.

The Central Federation (Koman: Shimlah Hayânhoş; Aramani: ?), colloquially known as the Federation (Koman: Hayânhoş), is a sovereign state located in Vaniua. Spanning the central region of the Golden Crescent and the entirety of the Hayeman valley, the Federation borders Gushlia and Balakia to the south and south-east, Vogia to the north, Amaia to the east, as well as Vosan to the west. With a population of over 84 million citizens and a GDP value of over US$1.1 trillion, the country's economy is one of the largest in Vaniua. The federation is currently considered the largest sovereign state in Vaniua with a total size of 1.6 million km2 and constituting 3 member states, Araman, Komania and Torosha. It is currently a founding member of the Eastern Vaniuan Association.

The Federation was officially founded in 1987 with the state union of Komania and Araman through the Central State Alliance, formerly founded in 1960 as an economic and military alliance against neighbouring powers. Torosha was later integrated through a petition in 1994 after the fall of its Kuulist regime. This political entity has served as an economic block against the former Union of Shomosvan and a contender to Vosan and Vogian predominance. Whilst founded on January 10 of 1987, the federation is continuously undergoing significant reforms and infrastructure changes.

The federation is a form of confederaton, where federal law takes precedent over state law (all decisions are discussed in the Grand Assembly and ultimately binding for all member states). Furthermore, this union was established for eternity with no option for dissolution (legally), making it impossible for its current integrants to leave it or for new members to integrate it. Additionally, the federation's authority remains strong within its member states as legislation does not require unanimity, but a majority vote instead, with the possibility of repealing such laws at the state level (with the consent of federal authority). Each member state is free to enact or repeal any laws passed through the Grand Assembly up to 4 times a year, as long as federal laws are in conjunction with each member state's subordinate legislation.

The White War which lasted from 1898 to 1903, led to the establishment of Gushlia and the definitive closure of sea access to Komania, superseding a series of events which bought and exacerbated extremism and extreme revanchism to the political elite of the Imperial State, forcing an abrupt shift of policies towards defence and the creation of "core allies". The Shozasan Proclamation and the later Treaty of Kavam became tide points towards a wave of resentment to the ruling Ashar elite, culminating in the dethronement of the Basher regime already by January 6th of 1910. This series of events led to the ascendance of the Mishan regime and the current dynastic rulers of Komania. This series of events is what led the ruling government and Sannist factions that the creation of a strong, unified and central block in central Vaniua was needed to maintain the territorial and economic integrity of Komania, initial efforts began in 1920 where Sham Ihlari, a Koman statesman, formed a non-partisan coalition within the Koman assembly, in an attempt to persuade the emperor and infiltrate state leadership towards a common goal. By 1947, 10 years after Ihlari's death, the first mandate and economical pact with Araman was made, culminating towards the Central State Alliance in 1960, later joined by Torosha not long after the establishment of the Central Federation.

The Central Federation was officially established on January 10 of 1987 as per the 3rd act of the Koman Congress the same day, drafted by a fourth treaty Final Act of the Regional Alliance to Complete and Consolidate the Organisation of the Central Federation. This treaty was signed by all parties involved on January 9 of 1987 and was effective 24hrs after closure. Part of the 9th clause of the constitution reserved Torosha the right of joining the federation, which it did 7 years after its establishment.

The Central Federation is a Confederal parliamentary union under a constitutional monarchy, made up of 2 hereditary constitutional monarchies and 1 parliamentary republic. It is governed by the Grand Assembly composed of 1 president and 2 Electoral-princes whereas the elected princes are the current rulers of their respective countries and the president is the head of state of Torosha, both titles maintain equal status and do not diverge in ruling power. All responsibilities not granted to the federal government are reserved to the individual country, as long as such matters are in accord with federal authority. 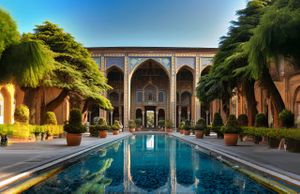 The palace of Mirrors, best known as the Palace of the Federation located in Samadar.

The Grand Assembly serves as the highest and final authority in the confederation composed of 2 cabinets, the Supreme Chamber and the Subordinate Chamber accordingly. The Palace of the Federation serves as the ceremonial headquarters for the Supreme Chamber where its integrants include the President of the Federation and Electoral Princes. All gatherings officially under the Grand Assembly are to be held in the Palace of Assembly located within federal quarters in Samadar.