Dain Pain (Kwang: [daɪ̃́ paɪ̃́], 2 Feb 1891 - 3 Oct 1951), born Hài Kuq, was a Kwang politician who proclaimed himself as the Avatar of Houn Shi and the Emperor of Qonklaks shortly before the outbreak of the Pangyeoun War. At one point, he reigned over more than half of the entirety of Soltenna.

He got involved in politics during his time in the Quonco-Zaizung War in 1917, drafting his controversial publication The Command From the Heavens. He managed to rise through the the ranks of Lha-Khu, eventually becoming party leader in 1919. In order to provide security for himself and fellow party members in public rallies, he invited the 104th Southern Company to join the newly founded Huq Kai ("Blood-Red Lightning"), a paramilitary organization.

Hài Kuq was injured in a botched assassination attempt in 1920, but recovered quickly. He then orchestrated a series of coordinated attacks on political opponents in an attempt to intimidate them. 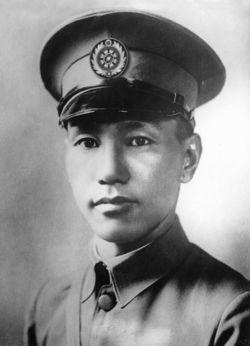 Ascension to the Dragon Throne

By the time Helsonian troops reached the city limits of Jikhein, Dain Pain had already fled the city in a prototype helicopter. Braving anti-aircraft artillery, he managed to pilot the craft all the way to approximately the southern provinces of Ru. The exact location, though, was unknown. There, he fled further northwards by hiding in a cargo freighter that led him all the way to Yachiro. He managed to stay hidden until he was found by the now-kúúlist Yachiroese forces, which captured and prompty relocated him back to Qonklaks, now also under kúúlist administration.

After Dain Pain was assigned the title of "Archtraitor of the Revolution" on 7 October, 1950, he experienced repeated torture at the hands of his SSIS captors. Due to continued failing health, his handlers reduced the amount of torture and instead placed him in solitary confinement on 5 November 1950. He spent a total of 332 days in a 2 m2 cell until his death.

Because of poor sanitary conditions, it was common for the prisoner's water supplies to become contaminated with bacteria. Around late September, Dain Pain became infected with the bacteria Shigella, and displayed signs of dysentery within 48 hours. He was found dead on 3 October, 1951.

He received no official state funeral. Instead, Golden Kwang officials ordered his body cremated and blasted out of a cannon so that he would never reincarnate.

The impact Dain Pain left upon Qonklese society in 1950 was widespread. The general consensus by January 1950 was that the Qonklese Empire was still in a position to win the war against the Helsonian invaders and successfully unite Soltenna, but by the end of the war, it was clear that Dain Pain had abandoned the cause, and support for the war effort had mostly dwindled.

Due to a strong Qonklese propaganda system, Qonklese ultranationalist ideas were still present within the population, and was wholly incompatible with kúúlist ideals. The Ngonku spent the next decade spinning the narrative against the positive imagery built around Dain Pain during his reign.