Danshapu (IPA: /danʃapu/, Native language: Danshapu, IPA: /danʃapu/), officially the Country of Danshapu, is a country located in the Draconic Islands just at the tip of Northeastern Nagu. Its closest neighbors are Astalva and Chelgyu and Chinamshi. The archipelago has for centuries been home to the Danshahi people, a community of island dwellers known for their unique religion based around the worship of the elements of Nature. The country is also known as a loyal ally and friend of Qonklaks, who functioned as an adoptive parent to Danshapu following the end of centuries of isolationism.

Very little is known of the ancient Danshahi. Modern historians speculate that humans came to the islands from Soltenna, during a period of great cold. The first settlements would have been on the East coast of Anopu Island, yet as they expanded west, the largest settlements came to be the ones surrounding Mount Cesoku, especially Runqepu.

It is not known when the Danshahi began worshiping the elements, yet it is undeniable that even back then this peculiar religion was already practiced to some extent. In fact, many historians believe that the growth of the settlement at Runqepu may have occurred due to its proximity to Mount Cesoku, a place of great religious importance, where religious rituals often took place. There is, however, no doubt that this worship was back then uniform across the island, with religious divides only taking place much later.

The Danshahi were, at this point, one united tribe, with one culture and one religion. The Danshahi tribe had their main settlement on Runqepu, and had began spreading throughout the rest of the island. As they did, communities began splitting up into smaller tribes, or clans. These clans formed their own complex societies, and engaged in trade with one another, leading to the specialization of these societies based on the main goods they produced and exported. This led to their culture and religious worship shifting towards particular elements and spirits important to them, their faith changing their customs and traditions and vice-versa. Mount Cesoku remained an important place of worship for all clans, however.

This caused a major issue when the Shamans of Runqepu, who had started seeing the elements of Rock and Earth as the primary focus of the faith, began branding worshipers of other elements as heretics, and banned their presence from Mount Cesoku. This decision caused great outrage throughout the island and and tensions began to rise, reaching their peak around the 62nd century, when the Shamans convinced the chieftain of Runqepu to pass a law forbidding the worship of any other element inside his land. This triggered the First Elemental war, one of the bloodiest of all Danshapu civil wars.

The first elemental war, which took place in the 62nd century, forever changed the culture and inner politics of Danshapu. During the war, the people of each clan, initially united against the Runqepu clan, began turning on each other as well, turning the war into a free-for-all. The goal of the war shifted from guaranteeing the rights of the clans to worship a different elements, into an attempt by all the clans to unite the Danshahi under one banner, in order to force the the worship of their own element.

The war lasted for several years, during which some clans were almost annihilated, and the general population of Danshapu plummeted. The Su Clan, a clan of people who worshiped nature, animals and plants, gave great value to life, and as such wanted to end the war as quickly as possible, in order to prevent needless bloodshed. As such, they did not plan to enforce their beliefs on others. They organized an impressive defense, supported by their recent settlement on a second island (Sunuxipu). After the remaining clans had been exhausted, the Su made a quick series of offensives, capturing key locations in order to bring all of the clans to the negotiating table.

Following their victory, the Su clan reformed the society of Danshapu, formalizing the clans as a division based on religious beliefs, and allowing each of them to dedicate themselves to a particular element. They then assigned land to these clans, guaranteeing there would be no conflict between people of different beliefs. From this decision resulted the initial 8 clans: 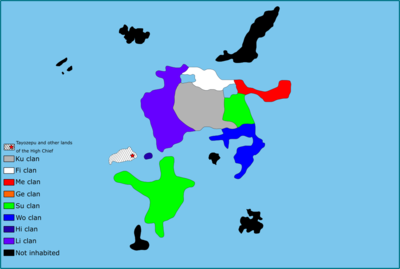 Land assigned to each clan at the end of the First Elemental War.
Note: While not all parts of the 2 largest islands were inhabited, the treaty still assigned this land to one of the clans)

The Su clan became the ruling clan, the chief of which would also fill the newly created position of Taytho of Danshapu, ruling over all of the clans from a neutral city which would be founded on the newly discovered Juzpu island. This city became known as Tayozepu, meaning "High Chief's Seat". The tiny island of Xijitepu also became a neutral holy land, where all elements could be worshiped together. The small Ge clan wasn't given any land at first, and instead lived in the capital, functioning as the royal guard and royal army of Danshapu.

This was the beginning of the Su Dynasty, the first dynasty to rule Danshapu. Following the coronation of the first High Chief, Oletho I Midsu, the country entered a period of exploration, inspired by the recent discovery of more islands by the Su clan. This lead to small settlements being built on almost all islands of the archipelago. However, full scale colonization had to be delayed due to the low population of the country following the bloody and violent war. With many clans on the brink of extinction, many islands were ignored, being claimed by some clans, but settled by none.

Due to Danshapu's geographic location in the Dragon Sea, just north of the subtropical high, the islands of the archipelago possess a warm, subtropical climate, moderated by the ocean, with hot summers and mild winters. The southern islands in the archipelago, located closer to the tropic, such as Niyikupu, Meqyothpu and Sunukhipu have a drier climate, with less forested area, and a terrain resembling a savanna. However, the islands get wetter the further north you go, gradually becoming covered in a denser subtropical jungle. Additionally, the western side of the archipelago gets extra rain coming from Nagu, while the East doesn't get nearly as much. Due to a change in the position of the subtropical line throughout the year, passing over Danshapu, the majority of the islands feel a significant difference in rainfall, leading to a strong cultural distinction between Qovame and Qovawo, the dry and wet seasons, respectively. This also leads to the main wind directions shifting direction throughout the year. Due to the volcanic nature of the islands, they also possess mountains, where the high precipitation at elevation allows for seasonally snow-capped mountains and lush forests.

In the past the nation was ruled by the High Chief and his "Right Hand". Some High Chiefs also kept councils which included important people such as the commander of the royal army or the master of finances. The chiefs of each clan were considered vassals of the High Chief during these times. However, following the 4th elemental war, all High Chiefs kept a council composed of 16 representatives, one from each of the clans, called "The High Chief's Hand" and this council governed the country, effectively reducing the power of the High Chief. However, he still kept some powers, like the power to start wars, dissolve the council, replace members on it and to choose the leader of the council, the new post of Prime Minister. Following the 5th elemental war, which opened the country from isolation, the High Chief further lost the power to replace or choose members of the council. The council itself was replaced with a parliament where a number of seats is assigned to each State, and filled by members of the party that wins the local vote for that state .The remaining seats are filled in such a way to guarantee representation proportional to the number of votes each party gets, nation-wide. The states with the smallest number of representatives are the Yi, Hi and She states, and the largest number belongs to the Me, Wo and Tayozepu states. Even though the clans technically no longer exist, state borders are based on the areas previously owned by them, the inhabitants of which still have a very strong identity of belonging to said clans, making old clan rivalries and alliances very prevalent in Danshapu politics.