The UKDP is comprised of two main parts, the island of Dhwer, and mainland Penkrot, separated by the Haym-Kalb II Sea.

Penkrot is bordered on the southeast by Taanttu and to the south and west by Lhavres. It shares a maritime border to the northwest with Mbamigi.

Kuyathic and proto-Kuyathic clergy and philosophers have an extensive and elaborate timeline going back thousands of years based on the concept of history as a succession of endless cycles, each "ruled" by a different civilization as peoples and civilizations come and go.

The earliest cycle that is given in any detail was ruled by exotic creatures known in modern dhweran as the XX and ends around 20 thousand years BCE. While their name and the period this cycle covers mostly coincides, their depiction varies wildly between different accounts in different regions and time periods. The time depth and variation in accounts makes it hard to state anything definite about the historicity of the XX, much less of the few events that are dated to this period, but a reasonably common theory among scholars posits that this represents cultural memory of a time when the North Fals were much more common, perhaps even hegemonic, in the Thewer Basin. The archeological record of the north fals however is very patch and it is impossible to state with certainty that they were ever that common in the region.

The following cycle was ruled by the Kavs and lasted between 20 and 15 thousand BCE. While there is ample evidence of Kav hunter gatherers in the area in this period, civilizations of the magnitude usually described are not corroborated by the archeological record. Specific stories and events in this period are still usually regarded as mythical.

The next cycle was ruled by the Kapaɣūlen and lasts the ten millenia between 15 and 5 thousand BCE. The end of the Kav cycle and start of this cycle roughly coincides with the period where humans start to become commonplace in the Thewer Basin, around a millenia after the oldest confirmed Homo sapiens remains in Boroso are attested in the Czucz region. This cycle is very long and filled with the bulk of mythical narratives about superhuman feats. Some scholars link the Kapaɣūlen to either the Bone Hook Culture or the Proto-Thewerics, sometimes even equating all three groups, but these theories cannot be confirmed. It is very improbable even that a group mantained this degree of cultural continuity over a period as long as 10 thousand years, so several groups could potentially be linked to the Kapaɣūlen without contradiction. Unraveling the identity and historicity of the Kapaɣūlen, along with potential links to modern Dhwerans, was one of the main drivers to the start of archeology as a field in Dhwer in the 1800s.

Lastly for the Ancient Period is the Dulic cycle, between 5000BCE and 286BCE. Its start has been linked to the early waves of Proto-Upper-Borosan expansion but this is dependant on particular theories about the UB urheimat and its expansion path and not agreed upon by scholars of the field. The latter half of this cycle is primarily historical, with long genealogies of Ramekian, Dhweran and Penkrotian kings and the conflicts between them, with several settlements and battles corresponding to other historical sources and to the archeological record, such as the Dhweran campaign against Ramekia in the 900's BCE.

Between c. 500 CE and 1215 CE the Great Dhweran Empire ruled much of Northern and Central Upper Boroso. In 1215 CE the empire collapsed into several 'shogunates' only nominally part of the same polity, as a culmination of a process of decentralization that had been happening since the eleventh century.

Dhwer would only become a de-facto centralized state in the early 1800s as a response from the military threat from the Setyal Empire. Through the late 1800s it would consolidate as an absolutist monarchy with strong ties to Kuyanist religious institutions. This consolidation of power was not without resistance; During the last two decades of the 1800s and the early 1900s several popular political movements grew in Dhweran society; from hardline Abolitionists to many movements on the Balko-Kuulist spectrum. The most important of which was the Kuulist Party of Dhwer. The Kuulist Party would be legalized in 1926 and steadily grow to be a branch of the government, especially as the persecution on abolitionist movements grew in the 40s.

In 1957 a Kuulist 'pseudo-coup' happened, in similar molds to the 1932 Mwamban revolution, as Emperor XX, who had come under scrutiny from groups inside the Dhweran political establishment for his poor handling of diplomatic missions to Ekuosia in the aftermath of the GEW, was deposed by his nephew, Haym-Baqr, a member of the Kuulist Party, that officially abolished the office of King and established the Dhweran Kuulist Republic, forming close diplomatic ties with Rosland, Helsonia and the Golden Kwang.

After the crystallization of a one party state that could be called totalitarian, civil and political liberties dropped even more, the abolitionist movement was suppressed as political parties were outlawed and persecuted and many political dissidents fled the country, most for Lhavres, Sangmia (some of which would participate in the failed Sangmian Balkist Revolution) or Magali. This soured the already shaky relations with Lhavres even more, especially as the volume of slave refugees increased, leading Lhavres to embargo Dhwer in 1962, economic and diplomatic sanctions between the two countries remain to this day, with several proxy conflicts in the disputed Thewer region happening since then. The Dhwer-Lhavres border becomes highly militarized in this period, as Lhavres slave freeing programs prompted the Dhweran goverment to increase oversight over the very extensive land border. Most of it is walled since the late 60s.

Dhwer was diplomatically isolated from northern Borosan countries after Mwamba aligned with Lhavres after 1963, and was increasingly alienated from global politics, especially after the Dhwer-Helsonia split in the 80s. After Haym-Baqr died of natural causes in 1984, the Kuulist KaLenth elected his son, Haym-Kalb I, as the next Supreme Leader of the Party. This prompted Vexut to denounce Dhwer's ways as "un-kuulist" citing the hereditary monarchical ways of the Kuulist Party of Dhwer and denouncing their continued practice of slavery. Other countries also denounced this succession. After Helsonia shifted it's focus to the Ekuosian Union in its liberalization efforts and broke diplomatic ties, Dhwer's economy felt into a recession, after a couple decades of stagnation, as they could no longer counter the Lhavresian bloc's embargoes and sanctions.

Dhwer kept ties with the Golden Kwang until the fall of the regime in 2005. After the fall of the Helsonian Union and the Golden Kwang in 2005, Haym-Kalb I officially adopted the title of Supreme Leader of the Kuulist Party and King of Dhwer and Penkrot and added hereditary succession to the Dhweran Constitution, along with mending the ties with the Kuyanic establishment, which was given less focus during the 1957-2005 period.

Haym-Kalb I died in 2014, being succeeded by his second son, Haym-Kalb II, in the office of Supreme Leader of the Kuulist Party and King of Dhwer and Penkrot. 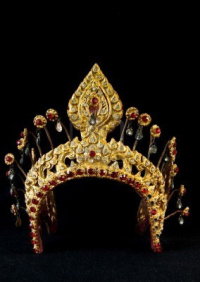 Crown of the Dhweran monarchy. A stylized version is used to represent the royal house.

Dhwer has a monarcho-kuulist government. While it is kuulist, it retained its royal family as the leadership of the Kuulist Party of Dhwer and Penkrot. It has been a one-party state since 1957. While it had officially renounced the monarchy and associated titles in 1957, the office of Supreme Leader remained hereditary and was declared a King title again in the 2005 constitutional adenda.

There is a legislative body, the KaLenth, constituted from the Kuulist party. Other political parties are outlawed.