Ebo Nganagam, commonly known as Ebo, is a sovereign state located in northern Baredina, considered part of both the Ekuosia and Puzimm regions. It borders Barradiwa to the west, Tabiqa to the south, and the Parshita Sea to the north. It is Sahar's most populous and second largest country, with an area of approximately 3,900,000 square kilometres and a population of 368 million. It comprises 33 states as well as the Aga Dighagot Capital District.

Ebo Nganagam has been home to numerous kingdoms and tribal states over the millennia. The modern state originated from colonial rule beginning in the 18th century, principally under Veridia, Letzia and the Balak Empire, but earlier also under Terminia. The Republic of Kahamogo gained independence from Balakia in 1963 during the dissolution of the Balak Empire, while the former Veridian East Puzimm and the Lestzi Colony of Obuzga gained independence as the Obuzga Federation in 1968. A merger of the two nations was effectuated in 1973 and the name Ebo Nganagam was chosen for the new federation.

The origin of the name "Ebo Nganagam" is unclear. A popular theory is that the name descends from the Shoma phrase ipu ɴɢano kam meaning "people of the village". Regardless of origin, the name became a common term to describe the lands east of Kostenbad in Barradiwa from the 18th century. Originally the term referred to the entirety of Puzimm, including northern Tabiqa, but after the colonisation of Algador by Shohuan the term slowly came to be used only for the lands north of the Anuxaz river.

Most of the country has a tropical savanna climate - grasslands with patches of forest - however, the eastern area has a tropical monsoon climate, and there are also areas of rainforest in the easternmost areas. The southern area is drier and has a hot semi-arid climate. 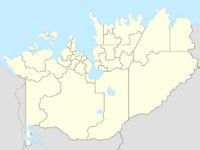 Ebo Nganagam is divided into 33 states and the Capital District, the city of Aga Dighagot.