Eyadhan (pronunciation: /ɛjaðan/ ) is a the capital and largest city of the Algazi Union, located on the country's east coast.

Eyadhan is located on a large bay on the east coast of the Algazi Union, near the cities of Adhar and Variij. A range of hills borders the east and south sides of the city.

Eyadhan experiences a hot-summer Mediterranean climate (Köppen climate classification Csa) strongly affected by its proximity to the ocean. It is one of the wetter cities in the Algazi Union, receiving an average of 524 mm of rain each year. 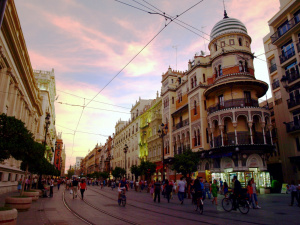 Avenue of the Congress in Eyadhan's Old City

The Old City is the historic core of Eyadhan, housing most of the major civic and cultural buildings as well as the national government and its related institutions. Most of the buildings in the district were built in the 18th and early 19th centuries, but a substantial portion, particularly in the center of the quarter, are much older, dating back as far as the 1400s. The area has become significantly more expensive in the last fifty years as more affluent Eyadhanan increasingly move to the Old City from the suburbs. As a result, many nieghborhoods have become known for high-end businesses, particularly restaurants and hotels. The quarter as a whole, however, remains fairly mixed socio-economically. The Old City is also the most popular area among tourists visiting the city, particularly along the waterfront.

Eyadhan is one of the largest financial centers in the Algazi Union, being home to the country's main stock exchange and several major banks. Shipping remains an important part of the city's economy, as does manufacturing (particuarly textiles, food products, and electronics).