Fádallan (þadĀl Páadtal, [fɐ̀:tɐl]) is a Theweric language spoken by around 10,000 speakers in Fádalh, where it is the official language, and within Fádallan communities in other countries. It is a member of the Theweric language family, separating from the Dhwer branch around 800 years ago with the settlement of Fádalh as a colony of the Great Dhweran Empire.

Fádallan loans heavily from Saavdis, spoken in the neighbouring Fals Empire. Saavdis loans are used primarily in colloquial speech, with native Fádallan words being used in more formal contexts and being viewed as more sophisticated, analogous to the usage of Greek and Latin loans in the English language. As a result of greater ease of communication in the 21st century, more and more Saavdis loans are being incorporated into Fádallan, with an estimated 35% of words being of Saavdis origin.

Fádallan is a heavily fusional, ergative-absolutive language with a simple two tone tonal system, phonemic vowel length, and a a small set of phonemic consonants with no voiced stops or fricatives. The primary word order is verb-object-subject, with a small number of auxiliaries placed after the verb to indicate some moods. Fádallan has a complex system of verbal and nominal inflection, with multiple classes and inflections. Verbs conjugate for person, tense, and mood, but not number. Questions are formed using an interrogative mood. Nouns have number and several basic cases, such as the genitive and locative. 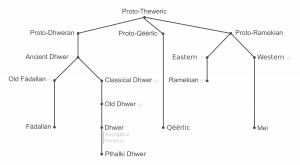 Fádallan is classified as a Theweric language because it shares features with other Theweric languages that distinguish them from other languages in the same region, showing that they descend from a common ancestor. Some shared features include ergative-absolutive morphosyntactic alignment, large amounts of vocabulary, and extensively studied sound correspondences between languages.

For example, the following is examples of various cognates in Theweric languages, contrasted with words of the same meaning in other nearby languages.

Because Fádallan developed separated from Dhwer and was affected considerably by surrounding languages, such as Saavdis, it is very divergent from other Theweric languages and does not have any immediate outward resemblance to them. This has lead to some question regarding its classification in the past, however all such claims have been since discounted and general consensus is that Fádallan is Theweric.

Due to a combination of few remaining written records and extreme conservatism around how the language was written followed by periods of rapid development, dates around Old Fádallan are very approximate. Most linguists place the divergence of Old Fádallan from Ancient Dhwer at c. 1400-1450. During this period there was little to no contact with the Great Dhweran Empire, allowing the language to develop in an entirely different direction from mainland Dhwer.

At this point, Old Fádallan was very different from modern Fádallan, with many reductionist sound changes yet to happen. Inflections were still largely just suffixes as in Ancient Dhwer and a lot of sounds lost still persisted.

By the time of the Letzic occupation in 1610, Old Fádallan had completely separated from Ancient Dhwer and begun the transition into modern Fádallan. This period of Old Fádallan's development is considerably better documented. Most Letzic influences on modern Fádallan come from this period.

Modern Fádallan grammar has developed from a Proto-Theweric system involving agglutinative inflection with a strict word order to a heavily fusional inflection with multiple word classes, ablaut, and more free word order. Fádallan retain's Proto-Theweric's rich inventory of noun cases and verb moods, supplemented with prepositions where they were merged and reduced. Relative clause markers agree with their heads in person and questions are marked using an interrogative mood on the verb.

Fádallan nouns are conjugated for two numbers and seven total cases, including a distal locative. Innovation is extremely common, with new nouns being formed primarily through compounding or as complete phrases. There is no distinction between mass or count nouns, with singular being treated as some basic unit determined through context and plural being multiple units.

Noun phrases are head final, with determiners coming before adjectives. There is no definiteness marking.

Adjectives come before the nouns they modify, with no form of agreement. There is no distinction between adjectives and adverbs.

Pronouns inflect for case, number, and person. Unlike nouns, pronouns use a nominative-accusative alignment.