The Fals (Haridus caeruleus) are a reptilian humanoid species and are the only extant members of the Sinosaurus genus; characterised by standing upright and bipedal locomotion, capability of higher thinking, speech, the construction of tools, and the formation of complex societies. Fals resemble humans in their posture, though they are a dinosaurian species, with its most commonly known ancestor being the Sinosaurus. Fals contemporaneously inhabit the humid, temperate region around the Gulan Sea on Boroso. Practically all Fals live in this area, and it is rather uncommon to find one living in a distant region, as the amount of nomadic Fals can be counted on one hand. Typically, the only Fals living outside their native habitat are colonists. Fals diaspora can be found in several places, the largest being the Fáknir settlers in Lhavres, followed by the Armizziya shorelines colonists, the Akralst river settlers, and the Haral colonists of New Pthalk, though also numerous smaller concentrations in other areas. Fals are capable of living continuously and safely in temperatures down to 6 degrees Celsius due to having evolved in their original habitat in Lower Boroso with its colder climates, but the present-day Fals has adapted to live in a warmer climate where this does not occur. It is presumed that next to the extensiveness of fertile land, this is the second reason for the popularity of Lower Boroso as a colonisation site.

None of these are often used by the general population, and usually only when wishing to emphasise something particular to the species, or when making a comparison with another species. Instead, most Fals refer to themselves by their ethnonym, place of origin or residence, or sex.

The species' binomial is Haridus caeruleus. The generic name Haridus refers to a group of species in this clade, of which the Fals is the only extant species. Caeruleus stands for "blue". 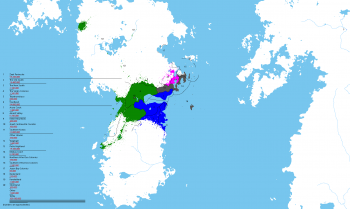 Distribution of the Fals species within Boroso.

Fals can live and breed in most terrestrial habitats and on all of the continents, but due to prehistorical suppression by technologically superior human immigrants into Boroso, their current habitat has been reduced to Central Boroso, specifically the area around the Gulan Sea, where their highest concentration occurs. This has not always been the case, however; as up until 2000BCE the entirety of the Fals were confined to the eastern coast of the Zaak peninsula, in current-day Farressetland, but with the advent of technological and societal developments, aided by large-scale trade and transport infrastructure, the population has increased rapidly and spread further land-inward and across most of the Gulan Sea's coast.

Conquest and population supplanting has allowed Fals to colonise areas in all directions of the Zaak peninsula and dispel their human populations and explore all of the continents and adapt to virtually all non-arctic climates. A remarkable feat of Fals expansion seems to be that it has been steadily constant and without much interruption, even in the face of internal instability; likely due to strong racialism and ethnocentrism. Within the last 1000 years, Fals have most notably colonised the western Isthmus of Katar, the areas across the Gulan Sea such as the Akralst valley, Kirmired, and the rest of Lower Boroso. Kioorland, and many of the nearby islands within the Armizziya Sea have also seen a large influx of Fals. To this day, over a third of all Fals that live within the Fals Empire (36% of total Fals) inhabit the Zaak peninsula. The total amount of Fals on Sahar is estimated to be slightly below 210 million, making it the second most numerous sentient species after Humans.

Since 1800, the Fals population has increased from 35 million to 160 million.

Most aspects of Fals physiology are closely similar to corresponding aspects of human physiology. The Fals body consists of the legs, the torso, the arms, the neck, and the head. Fals are digitigrade bipeds.

Unlike humans, Fals have a thick external tail, are more sexually dimorphic, and are oviparous. Fals have a small amount of feathers running down the back of the head, spine, and tail, continually decreasing in density and size farther down, and lack any form of hair. They have thick, leathery skin resembling that of a crocodile's, lacking sweat glands, and thus relying on shade, wind, water, or their respiratory system for the removal of excess heat.

Apart from bipedalism, Fals differ from Sinosauri mostly in smelling, hearing, brain size, and the ability of language. Fals brains are about four times bigger than those of Sinosauri. More importantly, the brain to body ratio is much higher in Fals than in Sinosauri, and Fals have a significantly more developed cerebral cortex. A remarkable ability of Fals is their ability of speech, which is unique among reptiles. Fals, like humans, are able to create new and complex ideas, and to develop technology.

It is estimated that the average height for an adult Fals male is about 189 cm, while the average height for an adult Fals female is about 174 cm. Through history, the Fals have universally become taller, probably as a consequence of genetic selection, increased nutrition, living conditions, and existential stability. The average mass of an adult Fals is 63-68 kg for females and 80–85 kg for males. Like many other conditions, body weight and body type are influenced by both genetic susceptibility and environment and varies greatly among individuals.

Fals have a dull grey colouration all-around, with differing but usually negligible amounts of flecks on the back. During spring, the skin colour becomes dull-blue, and stays so for the remainder of the summer. For females, the discolouration will affect every part except the stomach and chest; while for males the entire body is affected. A noteworthy fact is that the higher the level of testosterone there is in the body, the darker the skin will be, and the amount of grey will be more prominently outbalanced in favour of blue. Furthermore, there is some variation relative to environment; Fals from higher elevations tend to be more flecked in colour than those dwelling in the lowland. The Fals have surprisingly small and sharp-looking eyes and have rather sharp vision. Their colours are blue, green, grey, and rarely yellow, by order of appearance. This mostly depends on their region of origin.

Aside from dimensions and colouration, the increased sexual dimorphism above humans shows in a number of other details. Facial features differ very strongly by sex, for example with males having significantly more defined and augmented bone structure of the jaw, accentuated brow and nasal ridges, firmer snouts; as well as much larger hands and feet, claws, teeth, and thicker tails.

Fals have tough, leathery hide with two rows of rides running down the back of their neck, back, and tail, which are covered (to differing extents) in feathers. They have nictitating membranes to protect the eyes. The nostrils, eyes, and ears are situated on the top of the head, so the rest of the body can remain concealed if necessary. Their eyes are slightly smaller than those of a human. Fals are armed with powerful jaws lined with conical, serrated teeth for gripping and tearing flesh as well as thick, blunt molars in the back of the mouth for crushing nuts and seeds, a feature that originally developed in their omnivorous arboreal ancestors and which has become more pronounced in recent millennia with the prevalence of grain-based diets as their farming cultures developed. Evolving from arboreal ancestors also means fals are armed with claws on their fingers and toes which are typically rather short and thick, but which are often customarily sharpened. Different cultures have different customs regarding claw-sharpening, with the Xoxoki of Nagu even carving the tips into a double-pointed fork shape.

Typically, males are the primary sexual advertisers of mating rituals, when they attract females by showing off their body and face, exhaling deeply, making deep grunts, and a variety of other noises. A large range of courting customs is also implemented to maximise success. The larger, and bluer males of a population tend to be more successful at this. Once a female has been attracted, the pair seclude themselves and perform copulation. After mating, the couple often remains together until the death of one, but exceptions do occur. Females lay their eggs about two months after mating. Traditionally, the female puts the usually three or four eggs in a heap of rotting vegetation. The hatchlings start to make a high-pitched chirping noise before hatching, which is the signal for the mother to rip open the nest. The parents may pick up the eggs to help crack the shell and release their offspring. Hatchlings are about 40 cm long at birth, and grow somewhat faster than human babies do. The new mother will usually protect her offspring for up to twenty years. Sick, weak, and mentally or physically disordered hatchlings are often left to die, in accordance with all of the Fals cultures.

Compared with humans for whom childbirth is dangerous, the laying of eggs for Fals is practically riskless. In contrast, hatchlings and very young Fals have a higher death rate for a number of reasons, often in combination; namely abandonment, competition between siblings, an extremely curious, energetic, and explorative nature at young ages, causing infant mortality rates to be as high as 80/1000. Insufficient or incompetent medical provisions do not or only minutely play a part in this statistic. Typically, infants are around 2200 grams in weight and 40 cm in height when they hatch. As humans, Fals are helpless at birth, though this passes quickly when their primitive instincts kick in.

For males, the onset of sexual maturity occurs when they are about 20 years old, while for females, it occurs roughly when they reach the age of 17, under normal conditions. Females continue to develop physically until around the age of 21, whereas male development continues until around age 24. The Fals life span can be split into a number of stages, mostly the same as that of humans: infancy, childhood, adolescence, young adulthood, adulthood and old age. The lengths of these stages, however, have varied across cultures and time periods. Healthy Fals are fertile until the end of their lives. On average, men live about five years shorter than women. The life expectancy at birth of a girl is estimated at 78,8 years compared to 73,5 for a boy. The median age of the population Fals is estimated to be between 20 and 25 years, making it so that estimates show a spike in population growth for the next generations. Some Fals experience freak longevity. In the last century, at least three persons were known to have reached the age of 120, of which the eldest died at 132.