The First Cananganamese Empire was an empire that originated from the city state of Daktuva. The city state was originally only in control of an area around equal in size to modern Bosato before becoming one of the most prolific political entities west of Dhwer until the 1700s. The empire had several crises over the course of its existence before eventually falling into anarchy following a succession crisis which transformed the socio-religious atmosphere of the region in the 13th century.

The empire waged various wars of conquest and expanded its borders through various methods, most notably including religious colonization efforts. At its height, it had near total control over Asuranesia and the trade routes connecting Nagu and Boroso, stretching until the island of Kosomo, now part of Jute. Despite the empire being itself a state exacting tribute from various kingdoms and states, it had made many concerted efforts to assimilate the groups in its direct control, making a strict attempt to convert the various entities under its control into accepting core tenets of Lunukism into their local beliefs to varying degrees of success. The empire would also notably enforce a child tax upon tributary settlements to maintain order and the payment of tribute. In turn, this system aided the empire in assimilating various groups but also became a weakness as less than loyal subjects would learn much from the structures of the empire including its weaknesses.

The state religion of Lunukism was, at the time, a very much warlike belief system in that all who descended from the anghampe(Camic/Canamic peoples) were half-human and that through service, intermarriage, or tribute that they could themselves become ascended individuals belonging to the status of a citizen of the empire. The religion overtime would become further codified and organized as it became much more integrated in the everyday lives of the people of the empire, while slowly losing the original xenophobic qualities and beliefs, as various belief systems became further integrated into the empire.

Crisis of the 13th Century 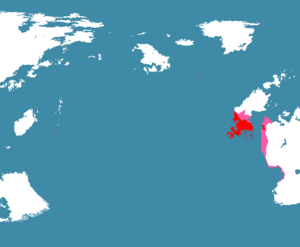 The Cananganamese Empire at its height in the 1120s, including subservient tributaries within the hegemon of the empire.