Improved irrigation techniques in the vicinity of Argeyaz Bay during the last three centuries BCE led to an intensification of agriculture and the beginnings of urbanization, mostly centered on Lake Wadan. Archeological evidence suggests that the city of Hafsigh, one of these early urban centers, was formed through an amalgamation of 3-5 smaller villages located on the peninsula in the lake. While the origins of the Yurek Dynasty are unclear, some historians have suggested that it is tied to this process of the city's formation.

Hafsigh's defensible location, which also allowed control of transportation across the lake, was most likely what led to the city's emergence as the pre-eminent power of the Lake Wadan region in the 2nd Century CE. The defeat of Hafsigh's most powerful rival, the city of Madashir, in 248 marked the establishment of Hafsighi rule over the entire lake; from that point, the kingdom expanded outward into the loosely-organized hinterland of smaller agrarian and pastoral communities.

The expansion of both the Letsatian and Adzamasi Empires towards the region prompted concern in the smaller kingdom. Eager to avoid conquest, particularly by the Letsatians, King Uftar V formally entered into a tributary relationship with the Adzamasi Empire in 302. Relying on Adzamasi protection, several generations of Hafsighi rulers continued the kingdom's expansionist policies, eventually extending the kingdom's territory to include much of the present-day Algazi Union. Several ports were established in these territories, aimed at building up a substantial naval presence in Argeyaz Bay and the Gulf of Ishenar. The Yurek rulers also formally adopted Qurosism as the state religion, though minimal effort was made to convert the population as a whole.

Given its military and economic dependence on the Adzamasi Empire, the Hafsighi Kingdom began to decline after 500 CE as the empire ceased expanding and was plunged into crisis after the establishment of the Holy Adzamic Empire in 638. During the in the mid-7th century, a millenarian religious movement emerged in Hafsigh under the leadership of Serīm, a prophet figure who proselytized among the lower classes. Serīm and his followers believed that the world would eventually be cleansed of mazuran, the malignant spirits of the traditional Algazi religion, and the aristocrats who were seen as their servants. This cleansing, would lead to the creation of a world-wide utopian society centered on Hafsigh and under direct rule of the four main gods. The arrest of Serīm in 659 launched several days of rioting in Hafsigh, in which he was released by his followers. Serīm and his movement went underground, leading to a six year period of assassinations, spontaneous uprisings, and raids that subsequently escalated to the point of open war after 665. Despite Serīm's death in 673, fighting continued; Serimites under Bızigh Ankesh conquered the city of Hafsigh in 678. Ankesh, creating the title of Legate for himself, assumed de facto control of the Hafsighi Kingdom, reducing the monarch to a figurehead. Ankesh struggled to maintain control, however, as his efforts to impose Serimism engendered substantial opposition from clergy and regional nobility while the Serimite movement was increasingly riven by factionalism and internal conflict. 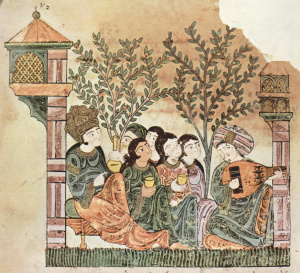 Manuscript illustration of a Hafsighi court scene, c. 780. Hayan the Wise is seated at left.

In 694, nobleman and general Dareb Sadhas successfully captured Ankesh and the young King Kedjun in a coup backed by elements of the military and the indigenous and Qurosist clergy. Dareb formally assumed the throne and established a new dynasty, which would rule the kingdom until its dissolution. Through intimidation, enticement, and violence, Dareb I was able to stave off the threat of ambitious rival families and ensure their compliance, bringing a relative stability to the Hafsighi Kingdom. He also oversaw campaigns to re-establish control over former Hafsighi territories.

Following Dareb I's death in 722, he was succeeded by his 24 year-old son Aransagh (r. 722-769), known as "the Great." A shrewd negotiator backed by a fiercely loyal inner circle, Aransagh implemented sweeping reforms that reversed the kingdom's decline, ushering a period of renewed economic and political power. The Argeyaz Campaign of 738-741 saw the recovery of several peripheral territories over which control had been lost, including the strategic port of Yazurum. Cultural development during this period of relative prosperity and stability escalated under Aransagh's son Hayan (r. 769-803), known as "the Wise." Though deeply involved in economic projects, literary and artistic patronage became the hallmark of Hayan's reign. Sadhas Hafsigh also reached its greatest extent under Hayan; though substantially smaller than its Yurek-dynasty peak, it wielded more direct control over its territory and was more economically developed.

The stability and renewed vigor of the early Sadhas Period began to falter under Hayan's successor Dareb II (r. 803-817). Surviving personal writings suggest that Dareb II struggled with depression throughout his life, which officials and noble families sought to take advantage of. The increasing political tensions and conflicts escalated rapidly following the onset of a major drought in 815, which caused famine and serious instability. Unable to cope with stresses of economic decline and unrest among aristocrats, commoners, and bureaucrats alike, Dareb II committed suicide in 817. As both of his sons had died in adulthood, the throne passed to his infant grandson Taysh.

The following 265 years were characterized by steady economic and political decline, with frequent inter- and intra-dysnastic power struggles and armed conflicts with rebellious cities on the periphery. The last Hafsighi ruler, Aransagh III (r. 1053-1078), died without an heir, as he was recorded as having relationships only with men throughout his life; this succession crisis sparked a civil war that marked the kingdom's dissolution. Competing families and factions remained at war until 1094, causing extensive devastation to Hafsigh and the surrounding region as the former Hafsighi cities along the coast remained relatively unscathed.

The Hafsighi Kingdom was divided into several provinces, each of which was subdivided in turn into districts. Both provincial and district governors were appointed by the monarch, who administered Wadan Province and the city of Hafsigh directly.

The Hafsighi Kingdom was theoretically an absolute monarchy with aristocratic officials comprising a highly centralized bureaucracy in the capital. In practice, however, the state was characterized by constant tensions between the royal household and the aristocratic civil service, with nobles exercising a great deal of control during periods of weak rule. Indeed, by the late Sadhas Period, the outer cities were essentially autonomous, being largely under the control of local nobles.

Military officers and commanders were typically slaves drawn from the ranks of the military rather than aristocrats, who were felt to be potentially seditious. These elite slaves had the opportunity to rise into higher positions both in military administration and in the royal household. Increasing inheritance of these positions in the later Yurek Period, coupled with privileges granted by Dareb I in exchange for their support of his coup in 694, essentially elevated their status to that of a second, lesser aristocracy, initially pitting them against the more elite civil aristocracy. This division would eventually be effaced with the onset of civil war in 1078 in which civil aristocratic families, needing the resources and abilities of the military aristocracy, formed strategic alliances cemented by intermarriage.

Despite the dramatic urbanization of the region over the course of the Hafsighi period, the vast majority of the population remained rural, with most people engaged in subsistence farming or herding. Substantial changes to the structure of rural society did occur during the kingdom's history, however, particularly through the middle and later periods of the Yurek dynasty. Initially an ethnically and culturally diverse region loosely organized by diffuse and overlapping clan networks, rural Hafsighi subjects increasingly coalesced into communities based on geographical proximity rather than kinship or ethnicity . This promoted both cultural hybridization and assimilation, with Hafsighi Algaz, serving as both a prestige dialect and a lingua franca, largely displacing the various Continental Argeyazic and Aukidian dialects spoken before. These communities were also integrated politically into the Hafsighi state through their leaders (mostly elders), who were expected to answer directly to district governors. 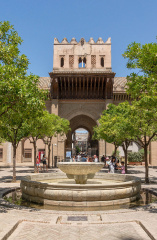 Courtyard of the Temple of Yena', Hafsigh

Official religion in the Hafsighi Kingdom was far more centralized and uniform than in the present-day Algazi Union, with a tightly ordered hierarchy of clergy centered on the city of Hafsigh itself. The upper ranks of clergy ultimately dissolved during and after the Hafsighi civil war, due to a high death rate and the general instability of Hafsigh and its surroundings. Other cities, housing only the lower ranks of clergy, became characterized by decentralized and largely un-organized religion, fostering diversification of religious beliefs and practices.

Periods of instability and decline, such as the later periods of both the Yurek and Sadhas dynasties, were characterized by a number of new religious movements, often with millenarian tendencies and varying degrees of influence from Iovic religions and Qurosism. None, however, became as politically and religiously significant as the Serimism, which was the largest of these by far.