Hápo Miiɥod (Achiyitqan: /'hápo mi:'ʃod/ 'Heat Tech'), also sometimes called NauHáɥo 'for the heat', is a luxury clothing and sporting goods manufacturer specializing in outdoor cold-weather clothing and winter sports equipment. Hápo Miiɥod produces high-quality goods using both traditional and modern methods and materials, in styles and price ranges from haute couture to high-end everyday wear. They export across Sahar, especially to affluent northern or mountainous countries. The company is committed to ethical hunting, environmental, and labour practices, and uses all-natural materials in most of its products. Hápo Miiɥod also owns a variety of subsidiary brands offering more affordable clothing, and a variety of sporting and camping accessories.

Hápo Miiɥod is important in Achitiqan history as the first true corporation in the country, and is a major employer in Achiyitqana. The company and all of its subsidiaries are considered cooperatives as they are 79% worker-owned, 15% foreign investments, and 6% private interests. 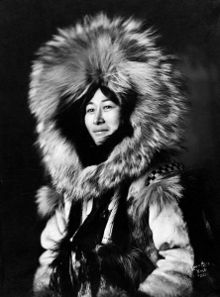 The modern company of Hápo Miiɥod can trace its roots back to community practices in Tsiqaqobuw, Achiyitqana in the 17th century. Maɥɥa kaPiwdic nauHápo heTsiqaqobuw hIɥtaawsúttudu founded the brand originally as Hápomiwd ('warmth coats', now genericized in Achiyitqan) to sell surplus coats to inlanders for a higher value than the raw seal skins, which were at that time the region's major export. Pre-1880, the coats were produced exclusively within Tsiqaqobuw, mostly by or under the eye of Maɥɥa, but were considered property and product of the community at large, as were the skins from which they were made, and any proceeds from their sale.

The products proved popular with visitors and export client, and demand grew, leading to alternative suppliers. By 1885 over a dozen other nearby communities, including Itssqits and Múunnaliyya began creating sealskin and fur coats and selling them under the Hápomiwd name, in a semi-united, semi-competitive arrangement. There were no legal copyrights or similar cultural institutions at the time to prevent this behaviour. However, many foreign purchasers recognized "Hápomiwd from Tsiqaqobuw" as the original brand and preferred to purchase coats produced there.

In 1888 the communities agreed to work together as a single entity, an incorporated group - the first in Achiyitqana - recognizing Maɥɥa nauHápo as their founder. Most of the producers moved to Tsiqaqobuw. The corporation became an entity separate from the communities its workers were part of, and conducted business as a separate group, purchasing skins from the locals and selling finished products to exporters. This allowed it to become a recognized brand name operating from multiple locations. A variety of other groups in Tsiqaqobuw, and later other communities, followed this precedent and also formed corporations.

Originally a very small company producing only a handful of coats each month, by 1902 - just over a decade after its official incorporation - Hápomiwd was employing almost two hundred Achiyitqans in Tsiqaqobuw and Tigáatgiaqits, where it had opened a second factory, and was manufacturing dozens of coats weekly in the sealing season. From Tigáatgiaqits, Hápomiwd was able to more easily export to clients further to the south.

In 1938 the company rebranded as Hápo Miiɥod after the term hápomiwd became a functionally generic term for sealskin parkas in Achiyitqana.

Today the company employs 16,209 permanent employees in Achiyitqana and neighbouring countries, and 512 further abroad. The number of seasonal and contract workers varies by year but has been persistently above 14,000 individuals since 1990, with the highest year being 2008 with nearly twenty thousand seasonal employees.

Hápo Miiɥod is best known for its seal-skin parkas and mukluks, typically in natural fur tones. Based on traditional methods but with modern equipment and sensibilities, they are ultra-warm, waterproof, sometimes form-fitting, and fashionable. While natural tones are typical, skins and furs are sometimes dyed other colours, typically reds and blues. 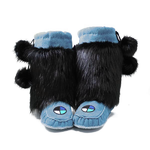 Hápo Miiɥod offers a custom tailoring service and often produces one-of-a-kind or limited-edition designs for high-paying clientele. These items are not often of the highest winterproof standard, but use highest-grade luxury materials including rare furs, gemstones, and precious metals. The most expensive parka ever sold, made of the coat of an albino mammoth calf (dead of natural causes), gold-gilded ermine and nearly two thousand hand-crafted turquoise beads, fetched nearly ஞ800 000 AQO / $608 000 USD (adjusted for inflation) at a charitable auction in 1986.

In partnership with international companies and groups, Hápo Miiɥod has also made unique clothing items from non-native species including zebra, a variety of antelope, and big cats. Although in every case these animals were not endangered or shown to have died from natural causes, this practice has stopped due to concerns of encouraging poaching of vulnerable species.

Since 1923 Hápo Miiɥod has produced winter skates, skiis, and snowshoes for outdoor sporting, as well as lighter and more breathable winter clothing for active, short-term exposure. In 1929 water bottles, thermoses, and backpacks were added to the company's production line. Hockey sticks and lacrosse nets were released in 1939, and in 1945 protective equipment like knee pads and helmets were introduced. Where possible and practical these goods are made of natural unrefined materials like fur and wood.

In 1958 the company began selling camping-specific goods as well: synthetic and caribou hide tents, sleeping bags, and tarps. These are almost exclusively export products, as they are branded as winter camping goods but inadequate for Achiyitqan winters, where an igloo is more in-order than a thin hide tent, which are only used in the summer.

In 2011 the company launched a small set of camping and survival electronics under the brand name Eidhápo ('New Heat') : battery and phone chargers, electric hand and feet warmers, digital compasses and thermometers, electric lamps, and flashlights. Eidhápo also sells trail rations and freeze-dried meals. While Eidhápo products are good quality, it is not a luxury brand.