The name is thought to come from the Proto-Kwang roots *kèʔḍê and *kwaj, meaning "outside land"

Humans arrived in Karduv in {date}.

The Karduvics were originally a subset of the Kwang people living near the Ungagon Mountains during the Wa Dynasty. It is unclear when they started to form a culturally distinct group when compared to the rest of the Kwang peoples. Due to a lack of records from the time period, most information comes from secondhand sources written during the Lya dynasty, or from later Karduvic sources. It is estimated that the Karduvics began to emerge as a distinct group during the mid to late 9th century BCE.

A map of the 7 kingdoms

While not under the direct rule of the Wa and Mor dynasties, the Karduvics were believed to be tributaries of the Qonklese during this time. According to Lya dynasty records, there were 7 Kingdoms within the Ungagon Mountains that were tributaries of the Wa, and remained as such in the following centuries. While only under tributary status, the 7 kingdoms were not afforded much actual political freedoms, and any diplomatic incidents or expansion done by one of the 7 kingdoms were quickly resolved by Qonklese pressure. As such, the political structure and status of the 7 kingdoms remained relatively unchanged throughout the Wa and Mor dynasties, though tensions and grudges began to build between the families of the respective kingdoms. 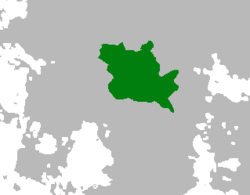 A map of Lorgung at its largest extent circa 549 BCE

After the disintegration of authority in the Mor dynasty, the Karduvics found themselves free from the oversight of the Qonklese, and as such the old order of the 7 Kingdoms of Karduv quickly broke down as each king sought to resolve their respective familial grudges. The subsequent wars lead to the unification of the 7 kingdoms under Lorgung under some guy probably idk in 690 BCE. With Qonklaks still embroiled in war, the kingdom of Lorgung underwent massive expansion into the west. Under X, the Karduvic small script was adopted, based on the Qonklese seal script used by the Lya dynasty. Qonklese logograms were used in conjunction with the small script.

A map of the successor states of the Lorgung

After the death of X in 528 BCE, the order in the Kingdom of Lorgung disintegrated as a child heir took the throne. Leaving Karduv a disunified patchwork of smaller states. Karduvic expansion continued throughout this period, though not under a unified Karduvic state. 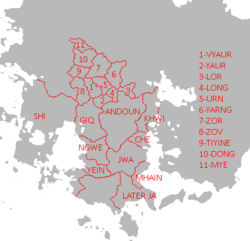 As the Le Dynasty Qonklaks collapsed, the various feuding fiefdoms in Karduv once again started to come into conflict. With the lack of any Qonklese intervention, the 11 states began to fight amongst themselves for power over potentially all of Karduv. 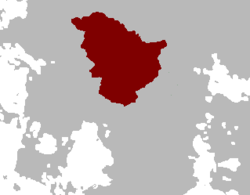 A map of Zìrjìrng at its largest extent circa 1063 CE

For a period of time (791-1123 CE) the Karduvic sphere was mostly unified under the rule of X under the Kingdom of Zìrjìrng.

By 1310(?) CE, the entirety of the Karduvic states had come under the rule of the Pho dynasty.

Karduv is situated in between the X river to the North and the Ungagon Mountains to the east.

Karduv maintains a strong relationship with Qonklaks, and most of its other neighbors. There have been diplomatic disputes with Liosol in the past, and tensions are still somewhat high between the two, especially regarding ownership of the Pomas Region. Tensions with Ru and Yachiro have been hostile since the downfall of Kuulism in Karduv, as the the former partners have started to threaten action against each other in recent years.

The Karduvic language is considered a dialect of Qonklese by the Académie Quonclaise, but is officially recognized as a separate language by the {whatever organization regulates Karduvic}.

Karduv is a member of SIFA.

The Qonklese sun is an important symbol of Karduv, however it is not the same as the Qonklese sun in Qonklaks. Karduv takes its sun from the Mai Dynasty, whereas Qonklaks takes theirs from the X dynasty. In Karduv it is often referred to as the Karduvic sun in order to distinguish it from the Qonklese one..