The Khezian area had historically been under control of the Ohanian Empire, until Qasam's kingdom conquered it in 544. Come 592 upon the death of Qasam, the Khezian lands are given to one of his grandsons, Ṣeviêje 1 of Khezan. Ṣeviêje would go on to establish the Seviyejid Dynasty which would rule over Khezan until the Tamir Khanate annexed the lands in the 900s CE. With the Tamir Khanate came substantial Kalkali influence ranging from loanwords to cultural practices. But Tamir rule would be brief for in 1192, Kai ha Sinoz would liberate the Khezid once more. And the lands would stay under Kayid rule until the Avicisid Dynasty in Vosan conquered the lands to bring Vosan to its maximum extent in history. It would stay under Vos rule until an incursion from Taayim ha Seadiz in 1564 brought Khezids independence yet again. The Taayimids would continue to rule Khezan, though inspired by Rus Canayes in Vosan, the king Ader Riceiẓ would turn to Sannist policy, and him and his successors ruling with iron fists until 1991. 1991 saw a revolution that took power off the hands of the then-king, Avi Ruoseẓ, and reformed the country into a constitutional monarchy. Now Avi's grandson, Ceirzir Iameẓ is the current reigning king, but his position is merely as a figurehead, with no real power, as that lies with the Chancellor and Legislator

According to the Khezian Constitution, the country is a unitary constitutional monarchy, with a king, chancellor, and legislator. The current reigning chancellor is Atava Ceirzireiẓ Az, who came into power circa 2017 (1565 YE). In the republic, there is a separation of powers, with power split among the three branches of government: legislative, executive, and judicial.

The Executive branch is represented by the Chancellor, who approves/vetoes laws and serves as the head diplomat for Khezan. Just like the Legislator, the chancellor may serve for three 5-year terms. Not only can the chancellor approve laws or be a diplomat, they are in charge of the Khezian military as well, and so are expected to serve as a general in the army during wartime, and therefore chancellorial candidates with military experience are more favored in election times. Also part of the Executive Branch is the Chancellor's Council, a group of people appointed by the Chancellor that act to advise him when necessary. These people usually serve for however long as their chancellor is in office, however they may retire at any point they choose.

The Judicial branch is represented by the Grand Court in Osgim. The judges on the court, whom are appointed by the Congresses with final say from the king, judge the Congresses' bills as well as the actions of the Chancellor on their constitutionality. They are currently 5 in number and serve until either their retirement, sudden death, or illnesses.

The royal family in Khezan, with the current king being Ceirzir Iameẓ ha Taayimaz ha Seadiz are functionally citizens, being figureheads of the nation, yet have some power in what goes in the Kingdom of Khezan. For example, the king has final say on who becomes one of the judges in the Grand Court, approves the chancellor-elect and legislator-elect, and accompanies the chancellor in diplomatic missions. 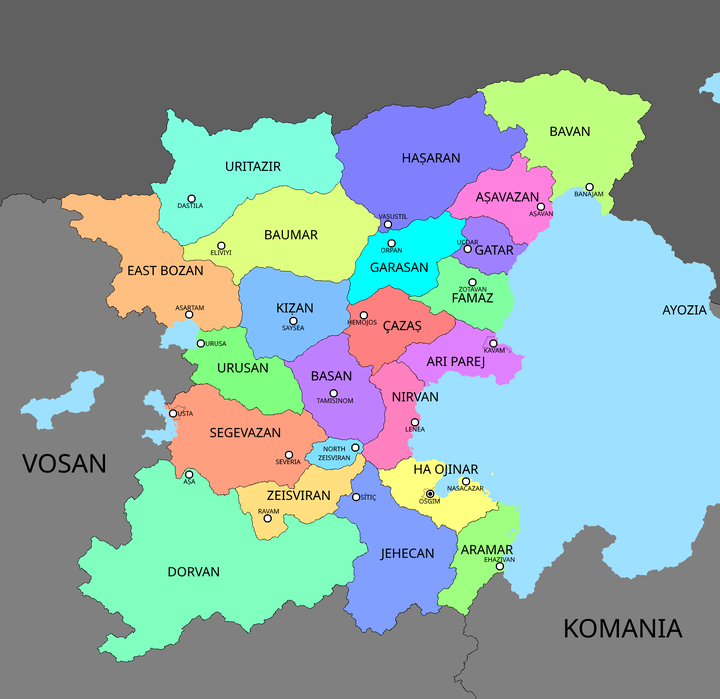 *Representatives in the Popular Congress

By most standards, Khezian is a fairly homogeneous country, with around 90% of the country calling themselves ethnically Khezid. In regards to the minorities, ethnic Vos are reported to make up 6%, Lenezi peoples follow them up, being three percent of the population, and the remaining percent consist of Thelemic peoples, Bashen, and the X in the northeast.

According to the Khezian Constitution, the one official language of the country is Khezian, and the Osgimi dialect of the language is the one used for international affairs and business. As of the latest census in 2020, it is reported that there are about 40 million speakers of the language as a mother tongue, and a significant deal of the rest have Khezian as at least a second language. Other languages commonly spoken in the country are Siyan, spoken in the north by about 2 million around the provinces of Baumar, Uritazir, and Haṣaran, and in the latter two, Siyan is a co-official language to Khezian. Additionally, Vosan has a significant deal of speakers, numbering up to at least 2 million, located in the west in the provinces of Segevazan, Urusan, and East Bozan, where it is the most prevalent, and is a co-official language to Khezian. Another language of significant status would be X, located around the southwest of Dorvan, and spoken by some 20,000 people.

Khezan's people follow the religion of Zarasaism, specifically the denomination adhered to most in Western Vaniu, Qasamism, distinguished from eastern denominations by its acceptance of some practices that are deemed forbidden in the east.