The Khezi-Vanosha border conflict was a 125 day long armed conflict fought between Vanosha and Khezan over several border villages and their jurisdictions. It was fought by the Khezan armed forces with the support of Vosan's airforce which controlled the village of Buraba, also known as Mačevá in Vanoshan, and the Vanoshan army. The conflict saw its origins in two prior incidents involving militia on both sides. The first incident was in January 8, 2010 with the second taking place earlier on the year on May 17, 2011. It was the latest escalation over the ownership of the villages of Buraba/Mačevá, Siora/Vórebiče, and Qeva/Viśmo which were within the zone of contest. The villages of Buraba and Qeva were originally on the Vanoshan side of the Kérośe stream, until sometime in the 1980s where a storm had flooded the region and diverted the stream which originally demarcated the border. Siora was built on the original stream and 60% of the village lived on the Khezan side whereas the other on the Vanoshan side.

The conflict was relatively brief, resulting in a Khezian victory and later, Atava Ceirzireiẓ Az's electoral victory early next year. Peace talks were later mediated when Lenezan diplomatically intervened with the support of various other Vaniuan countries seeking to prevent a greater conflict. A ceasefire was declared on December 29, 2011, with a resulting peace treaty signed on March 18, 2014 after both sides came to new terms detailing new borders based on a GPS reference, instead of geographical features which could sometimes change in the region.

The relations between the nations of Vanosha and Khezan had been in a position of animosity since the end of Vanosha's monarchy in 1924. During the majority of the 20th century, relations seemed to warm. In the 21st century border issues began to occur as a result of a series of unusually dry years which affected not only Vanosha and Khezan's farmland but dried several waterways which were typically geographic markers for border patrols and cattle ranchers in the region.

In January of 2010, an incident occurred as a result of a Vanoshan cattle rancher mistakenly taking his cattle across the Khezan border to a watering hole a Khezid farmer owned. The farmer notified the border authorities of the cattle, resulting in a firefight between Vanoshan and Khezid border guards later that night resulting in the death of the rancher and 4 Vanoshan border guards. The incident was investigated by a joint-commission of Vos-Lenezi investigators who found the Vanoshans in the wrong for the incident.

Several small scale incidents were happening throughout the year, when in May 17, 2011, a Khezid man was purported to have been kidnapped across the border and nearly beaten to death by Vanoshan border police. Vanoshan border police refuse the story and say the Khezid drunkenly crossed the border and fought with the policeman who had then resisted arrest for narcotic smuggling. The exchange left Khezid opinion of Vanosha to new lows with both sides increasing their military presence on the border. 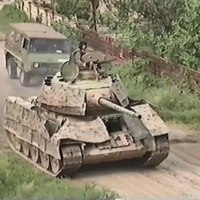 A frame captured by a security camera showing a Vanoshan T-22 in Buraba/Mačevá prior to the declaration of war, August 19, 2011.

By early August, some 300,000 soldiers were in the region and tensions were exceptionally heated as occasional mortar and artillery exchange were reported in the villages of Buraba/Mačevá, Siora/Vórebiče, and Qeva/Viśmo. On August 19, Vanoshan 1st Rifle Division took the village of Buraba defeating the picket defense there and captured the local government buildings, flying the Vanoshan flag. Incidentally, the Khezid 8th Armored Brigade had arrived and a pitched battle broke out between the two brigades lasting some 2 hours before the Khezid forces fell back, following a change in orders to await the arrival of the 5th Infantry Brigade. As a result, 32 were claimed killed on the Vanoshan side, and 49 claimed killed on the side of Khezan.

It's believed Vanosha wanted to occupy Buraba/Mačevá prior to Khezan's military being in a favorable defensive position while avoiding a declaration of war to potentially avoid the war altogether following their landgrab. Khezan replied with a mobilization of their army and a focus on containing a possible future offensive towards Viradar which would cripple Khezan's supply lines on the front.