Kutsotolho (IPA: /kut͡sotoʎo/), also known as Chacha, is a two-player Traditional board game native to the Draconic Islands. It is also popular all around Nagu and parts of Soltenna. The name Kutsotolho means "Valley Game" in modern Danshali. The earliest recorded mention of the game is from 994, by Canamic traders, who brought a set from the Draconic islands to play on their ships during their long travels. Kutsotolho is an abstract strategy board game with no information hidden from the players. 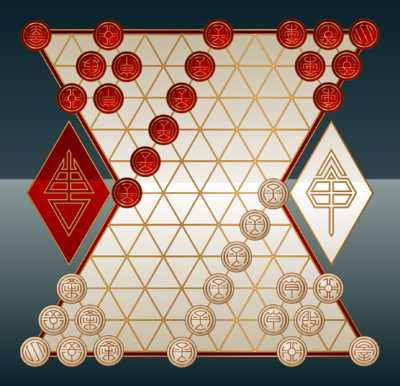 Two players face each other across an hourglass-shaped board, composed of tessellated triangles. The players are conventionally referred to by the colours of their pieces, which have not always been the same historically, but have most commonly taken the form of White vs Black or Blue vs Red.

Each player begins the game with a set of 19 circular pieces, sometimes made in slightly different sizes, to indicate the piece's power. Pieces face forward by having the character or symbol on each piece oriented toward the owner's side. The pieces from largest (most important) to smallest (least important) are:

Each piece has either its initial/name written on its surface, or a symbol representing it (used when playing internationally). The object of the game is to capture the opponent's king. Upon doing so, the opponent gets one more turn to retaliate, attempting to capture the remaining king. Doing so successfully results in a draw.

Bellow is a table of the piece's names in various languages spoken in countries where the game is played: 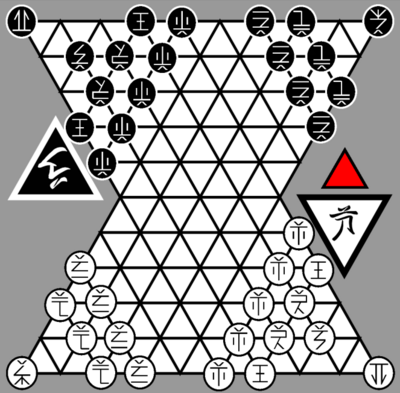 A representation of a Kutsotolho board displaying both sets of pieces, in their initial positions. The pieces on the far side are turned to face the player using them.

The game is played on a board made up of tessellated triangles. The board is at its widest at the end of each player's side, gradually narrowing down towards the centre, creating an hourglass shape. The pieces are placed on the vertices of the triangles, commonly called "Nodes". The board consists of 11 rows and a total of 19 columns. Due to the nature of triangle tessellation, not every row contains a node for each column. Uneven numbered rows contain nodes for uneven columns, and even rows contain nodes for even columns (1;1, 1;3 and 2;2 are valid nodes, but 1;2 doesn't exist). Because of this, the board's widest row contains 10 valid/real nodes and the narrowest contains 5 nodes.

The pieces are set out as shown in the diagram. The pieces are divided into 2 small groups, both of which are arranged diagonally on the 2 corners of the board on the players side, in such a way that they "face" the opponent's diagonally opposing corner. The pieces on the players left corner are the "Sea Army", which include the Sailboats, Caravels and Navigator. The pieces to the right are the "Land Army", which include the Pawns, Flags, Spearmen, General and King. The starting nodes of the pieces (for the white player) are described bellow:

The piece colours do not necessarily correlate with move order, and it is customary to allow an older or more experienced player select his preferred colour. Move order is allocated to players based on perceived skill, with the weakest player going first, and the strongest playing the role of "defender". The relative strength of players can be decided by agreement between the players or through a system of "ranking", in tournament play. In informal games, if there is no agreement on the relative strength of the players, or if they do not know each other, the order can be decided randomly, for example by a coin toss, or some other 50/50 chance game.

Traditionally, the act of placing the pieces on the board is ritualized and standardized. The most commonly used placement order is the Sji Sjhiz Mvb Order. This placement method sets pieces with multiples (caravels, spears, flags) from left to right in all cases, and follows the order:

After the pieces have been placed, and move order decided, the game proceeds. If multiple games are played, then players alternate turns for who goes first in subsequent games.

The General moves any number of nodes in an orthogonal direction.

A Caravel moves one or two nodes diagonally. When moving 2 nodes, it can jump over an allied piece, but not an enemy one

The Navigator can move one node diagonally, similar to the caravel. Furthermore, it can additionally move by jumping to any node located 3 nodes away from it, except for those located orthogonally from it. This can be visualized by imagining a hexagon with a radius of 3 nodes, centred on the navigator, and removing its vertices.

A Flag moves one or two nodes orthogonally in any direction. It can change the direction of its movement when going to the second node, allowing it to go around corners. However, it can only capture a piece if it is 1 node away. The movement to the second node is only allowed when not capturing.

A Pawn moves one node, orthogonally, in a direction towards the enemy pawns. This includes the node to its left, lop-left, and top-right. In essence, it cannot retreat.

A Sailboat moves similarly to the Pawn, but towards the enemy Sailboats. This means the valid moves for the Sailboat include the node to its right, lop-left, and top-right. Much like the Pawn, it cannot retreat.

Every piece blocks the movement of all other non-jumping pieces through the node it occupies.

If a piece occupies a legal destination for an opposing piece, it may be captured by removing it from the board and replacing it with the opposing piece. The capturing piece may not continue beyond that node on that turn.