Mablic peoples migrated from North Nagu to present-day Mablag from the 8th century. Three Mablic states arose and quietly coexisted for around 100 years, competing for resources with neighboring *Nagu Fals kingdoms. The three kingdoms were unified in the 14th century by Bwatyahngok.

Everything marked with an asterisk is OOD

There is evidence of continued habitation in Mablag as long as 10,000 years ago. Pieces of pottery found in Jozong Cave date to around the 7th Millenium BCE, the oldest in the region. Mablic peoples migrated over the course of around 1500 years from northern Nagu, modern day Goal, and arrived in the area of modern Mablag around 500 BCE, settling along the coast. Around this time was the first interaction between the native Nagu Fals and the Proto-Mablic peoples, as referenced in “The History” (Dui Je)

“And the chief of the Fals approached the gathered Mablic peoples, and he threw a pebble across the sand, for his name in their language was “Pitcher,” and it is the Fals’s tradition to demonstrate one’s name. But the Mablic people did not know of this tradition, and their souls felt the flooding river that is war lust. While it is common knowledge that sand is of a yellow-brownish color, that day it turned red from blood.”

As The History is a semi-mythological source, it is unclear how reliable this account is, especially since The History was written in the 9th century, well over a thousand years after the events described. What is known is that the Nagu Fals populated the densely forested interior of Nagu for millenia, and were organized into kingdoms, each with hundreds of villages along jungle rivers under their control. Various border conflicts and skirmishes between the Fals and the Mablic peoples would continue throughout most of Mablag’s history.

Over time the Proto-Mablic people split into three distinct ethnic groups, the Hmapla, the Shi, and the Beng. Little is known about Mablag before the 13th century, as literary sources are scant and most of the knowledge about this period is derived from archaeological evidence. The History describes three early kingdoms existing around 0 CE: the Akmreogn Kingdom, the Bengsa Kingdom, and the Shewngungeu Kingdom, being populated by Hmapla, Beng, and Shi peoples respectively. There likely existed other smaller kingdoms or early states during this period, but details are not known. 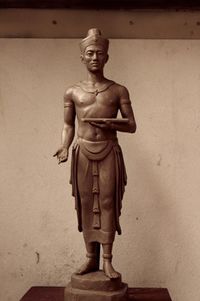 By the 13th century, three states were prominent in the area. Around 1040, Ebwi Agrew, a local Mablic ruler, crowned himself the first king of the Hneng Kingdom. Most historians consider Hneng the first kingdom of the Mablic people. The third king of Hneng, Baphma (1092-1127), is believed to have invented the Mablic script. Hneng embraced Angkhlism in the reign of Dedlung (1156-1197).

To the northeast, Kedapwaq, a Deyab warlord, founded the Kingdom of Deyabra in 1246. He unified the surrounding area and his dynasty would rule the kingdom continuously for the next century.

To the southwest, the Bren Kingdom was founded in 1203 by Pubbre, an Aysaung farmer who led a successful rebellion against the Ngiblebya Kingdom, which controlled the area in the late 12th century.

The kingdoms ran under a system called Kekngaug, a system that blended sharecropping and feudalism. Not much is known about the kingdoms’ early rulers. After nearly 300 years of peacefully coexisting, a tax rise implemented by King Brabrobye resulted in a rebellion in Bren in 1311. When Deyabra sent emissaries to Bren's capital to offer their help in aiding Brabrobye's suppression of the revolt, they were intercepted and killed by the rebels. Deyabra subsequently declared war on the rebellion, and when the rebels took over the government, Deyabra was effectively at war with Bren. King Nablew of Hneng was looking to expand Hneng’s terriotory and the war provided an opportunity. Within 20 years, all three kingdoms were unified under the Reu Dynasty by Hneng's 14th king, Bwatyahngok.