Mablic is a tonal and analytic language, largely monosyllabic, with a subject-verb-object word order. It is somewhat mutually intelligible with Deyab, another Prra-Blen language.

Mablic is a diglossic language with two distinguishable registers:

The literary form of Mablic retains archaic words no longer used in the colloquial form. In most cases, the relation between words in the literary and spoken forms is arbitrary. Examples of this phenomenon include the following lexical items:

The following sample sentence reveals that differences between literary and spoken Mablic occur in various words:

The consonants of Mablic are:

The vowels of Mablic are:

Mablic is a tonal language, which means phonemic contrasts can be made on the basis of the tone of a vowel. There are four contrastive tones in Mablic. In the following table, the tones are shown marked on the vowel /a/ as an example.

For example, the following words are distinguished from each other only on the basis of tone: 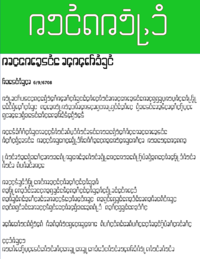 The Mablic alphabet consists of 19 base letter forms and 6 diacritics, that combine into 43 distinct letters, and is written from left to right. It requires no spaces between words, although modern writing usually contains spaces after each clause to enhance readability. Tone markings are written as diacritics placed to the top and bottom of letters.

From the perspective of linguistic typology, Mablic can be considered to be an analytic language. The word order is subject-verb-object, although the subject is often omitted. Mablic pronouns are selected according to the relative status of speaker and audience.

There is no morphological distinction between adverbs and adjectives. Many words can be used in either function. They precede the word they modify, which may be a noun, verb, or another adjective or adverb.

Because adjectives can be used as complete predicates, many words used to indicate tense in verbs (see Verbs:Tense below) may be used to describe adjectives.

Verbs do not inflect. They do not change with person, tense, voice, mood, or number; nor are there any participles.

The passive voice is indicated by the insertion of brig (prik, [pɾìk]) before the verb. For example:

The imperative is indicated with &u (hngu, [ŋ̊ù]). For example:

Negation is indicated by placing 9f (hmai, [m̥á]) before the verb.

Tense in Mablic is conveyed by tense markers before or after the verb. Present can be indicated by aw (aw, [àw], "now") before the verb for ongoing action (like English -ing form). For example:

Future can be indicated by t2x (theunh, [tʰɛ̂ɴ], "soon") before the verb or by a time expression indicating the future. For example:

Past can be indicated by h (ae, [ā], "before") before the verb or by a time expression indicating the past. For example:

Tense markers are not required.

Mablic exhibits serial verb constructions, where verbs are strung together. Some word combinations are common and may be considered set phrases.