The Maithic Empire (Maithic: Khù Khúlwàphãțu Bus (or simply Mẽ Bus) meaning "the Khul's Great State"), also known as the Mai Dynasty, was a Maithic state established by Sãļŋàŋ after the Maithic Conquest. The Empire was founded in the midst of a war between the powerful Ankuong Empire and Qonklaks, in which the Maithics served Qonklaks as hired mercenaries. After the Qonklese treasury ran dry, and the Qonklese demanded the Maithics kept fighting, the Maithics began to carve land out of both empires. This eventually culminated in sacking of Jikhein in 1338, and the execution of the Qonklese Emperor Sẽ Kai. After consolidating their power, the Maithics began massive raids across Western Soltenna, enriching the Maithics and bleeding the surrounding land dry. These raids would lead to massive famine across the region for almost two years, eventually striking the Maithic Empire as well. The death of Sãļŋàŋ in 1352 lead to a a power struggle between his remaining sons, weakening the formidable military force of the empire and leaving it vulnerable to outside attack. The struggle eventually came to an end in 1353, with the election of X as the new Khúl. After the fall of the 3 realm system, the Maithic rule became centered around Qonklaks. Despite being rulers of a majority Qonklese state, the Maithic Emperors and nobility would not adopt Qonklese culture. They promoted Maithic as the language of administration and encouraged Maithic settlement throughout the conquered lands of the empire. Leading to a rebellion among the Qonklese nobility and the overthrow of the empire in 1393.

During the 14th century, Qonklaks had been struggling with the newly formed Ankuong Empire, which consumed West Soltenna and threatened Qonklaks' hegemony and tributary relations. This lead to an eventual war between the two powers in 1336. Despite the extraordinary power of the Qonklese military, they were badly organized, and hastily forced into battle, leading to major defeats across the Maithic Plains. These defeats forced Qonklaks to hire the Maithics as mercenaries, who were highly effective against (whatever tactics or troops the Ankuong used). This lead the war turning in Qonklaks' favor, with the entirety of the Maithic Plains retaken by 1336, at the cost of the Qonklese treasury. When Qonklese Emperor Sẽ Kai demanded that Sãļŋàŋ's army continue to fight voluntarily, and without pay, the Maithics quickly began to seize surrounding lands from the unprepared Qonklese. The onslaught lasted two years, with both the Ankuong Empire and Qonklese Empire crushed under the momentum of the Maithic armies. After the fall of Jikhein in 1338, Sãļŋàŋ's men proclaimed him the Khúl of the Maithic Empire; according to legend, the ceremony took place in the still-burning palace of Jikhein.

Much of Western Soltenna was looted in order to sustain Sãļŋàŋ‘s military conquests, and the Maithics often forcibly relocated entire villages as they began to settle in modern day Mai Thi. This earned the Maithics a fearsome and hated reputation for centuries to come, often being thought of as bloodthirsty barbaric savages, and came to be commonly regarded as the root of all of Soltenna’s problems. While this reputation faded in many regions, it was ingrained throughout Qonklaks and Karduv, especially after the sacking of Jikhein in 1338.

A map of the division of the Maithic Empire

After the death of Sãļŋàŋ in 1352, there was an immediate struggle for power between his sons, the short but devastating struggle lead to a division of the empire in three parts, (list the parts here). X was then elected as the new Khúl, and symbolic leader of the other 3 realms. This compromise did not last past X's death, after which the three realms became functionally separate entities, although only X who ruled in Qonklaks didn't collapse. The Northern realm was subsumed by the Ankuong and the central realm was later conquered by the Mai Dynasty in Qonklaks. 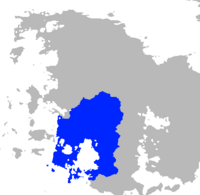 A map of the Maithic Empire in Qonklaks, also commonly referred to as the Mai Dynasty circa 1382 CE

In 1393 the Maithic emperor was overthrown by the disgruntled Qonklese nobility, tired of foreign rule.

A map of Maithic settlement spread throughout the empire

Maithic peoples spread and settled throughout the empire, though not every group would end up staying. Through forced migrations and mass killings, the initial spread of Maithic peoples was heavily reduced in the years following the fall of the empire. Areas of settlement included Karduv, Ru, Qonklaks, and Quaxin Xun; however most settlements outside of Mai Thi itself and some small areas of Quaxin Xun would not last past the 20th century. Maithic settlement was heavily encouraged throughout the Maithic Empire, with many migrating families even being elevated to nobility to incentivize rapid and large scale settlement. The Maithics used their fearsome reputation, and occasional acts of brutality or mass killings to force relocation of conquered peoples without conflict. While this method did not extend to every settlement, it was decently common.

The Maithic military strategy mainly revolves around pinning the enemy with either heavy infantry or geography, before raining down arrows with horse archers to either obliterate the enemy or force them to flee. While many of the Maithic’s enemies knew their strategy, they were unable to prevent themselves from getting trapped in unfavorable situations by Sãļŋàŋ. Through a mix of conventional tactics and guerrilla warfare, Sãļŋàŋ was able to force his enemies to engage under his rules in his ideal scenario. Most generals were forced to either fall back, or be trapped by Sãļŋàŋ‘s unyielding strategies. X

Sãļŋàŋ divided the Empire into four wings or armies, lead by either his sons or his most trusted advisors. This system ensured that the lands Sãļŋàŋ conquered could stay secure. As if one wing was attacked, they could hold out until the other 3 wings reinforced.

The Maithic Empire is still highly regarded among modern Maithics as the pinnacle of both power and culture. As both scholarly work and military might grew during the Empire’s existence. However, it remains as a controversial entity outside of Mai Thi, as it’s culture and prowess was preceded by a brutal and bloody conquest that still effects the ideas of Soltennan peoples today. The forced relocation of native inhabitants as well as the encouragement of Maithic settlement in the empire has lead to a perception of Maithic peoples as barbaric bloodthirsty invaders; an image that only started to become less prevalent in the 20th century, with the promotion of "National Forgiveness" and "Brotherly Unity" in the USCWS.