This article is about the sovereign state. For the archipelago, see Mbamigi Archipelago. For other uses, see Mbamigi (disambiguation).

Mbamigi (Mbamigi: pamigi [ᵐba.mi.gi]), officially the Republic of the Mbamigi Islands, is a sovereign state comprising the whole of Mbamigi Archipelago, located in the chain of islands between Nagu and Boroso. While geographically is part of Nagu, Mbamigi is politically and historically part of Boroso.

There is much debate over the origin of the name Mbamigi. In folk etymology, it is thought to be a compound of mba, "man" and 'igi, "island". Since the term is a cognate with Vaamek and Barmeki which are continental groups, this is most likely false.

For history before independence in 1922, please see History of the Mbamigi Islands.

Beginning in 1919, with support from the Kingdom of Vaamekia, Mbamigi began a campaign of non-violent resistance to the Dhwerian government, and after a drawn out blockade of Dhwerian shipping, the Mbamigi Islands were granted independence by Queen Weyelb-Dhank IV of Dhwer.

On March 3, 1922, the Republic of the Mbamigi Islands was declared.

Being at 15°N of the equator the Mbamigi Islands have a tropical climate.

The Republic of the Mbamigi Islands is a constitutional republic.

Main article: Provinces of the Republic of the Mbamigi Islands 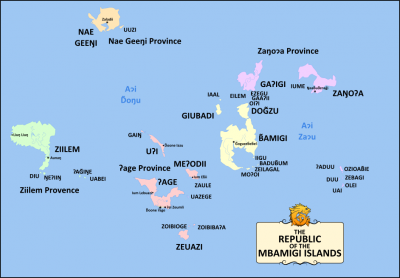 Map of the Provinces of the Republic of the Mbamigi Islands

The Mbamigi islands are divided into five provinces and one federal district. 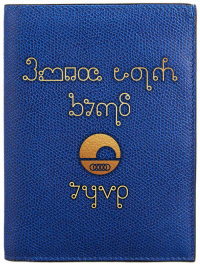 Mbamigi has mostly good relations with other countries. A center of banking, technology and tourism means the economy is highly reliant of export and tourists.

The economy of the Mbamigi Islands has historically been based around traditional industries such as fishing, agriculture, and tourism. Since 1995, a substantial period of rapid expansion and growth, known as the Dulic Tiger, has occurred. The phenomenon was caused by both direct foreign investment and rapid expansion of the technology and pharmaceutical sectors caused by the establishment of businesses such as Zage Technology and Nggolo & Zembemi Pharmaceuticals as well as the relocation of foreign firm's headquarters to Mbamigi (feuled by a low corporate tax rate).

Due to being an archipelago, very few rail lines exist on Mbamigi. The main forms of human transport are ferry and airplane.

MBATRANS is the nation ferry service. It was established in 1937 by the merger and nationalization of 22 existing private ferry services after a financial crisis threatened to bankrupt over half of the ferry services between the islands.

While several nuclear and fossil fuel power plants exist, more than 70% of Mbamigian energy comes from renewable resources. Several smaller islands have solar farms, and between many of the islands, vast off-shore wind farms operate.

There have been concerns on recent years, as some feel that wind farms interfere with natural fish and bird migratory patterns. While the farms have been kept away from traditional fishing waters, many fishermen feel that they block access to certain waters.

Since the establishment of Zage Technology in 1978, the Mbamigi Islands have been a powerhouse of technological inovation. Zage has become one of the biggest consumer and business technology companies on Sahar.

A combination of government incentives, low taxes, and a highly educated workforce has made Mbamigi (especially the area around Goguzembembel, Island of Mbamigi, earning it the nickname "Silicon Island") attractive to foreign tech firms.

Tourism became a major part of the Mbamigian economy when resorts were first established on 'Age and Mbamigi Islands. The forst resort, Nngebui Bay was established in 1762 as a playground for Dhwerian nobles. By the time of Mbamigian independence in 1922, tourism accounted for 52% of the archipelago's economy.

The two main urban centers in Mbamigi are its capital and largest city Ndoone 'Age on 'Age Island and Goguzemembel, the country's second largest city and technological center located on Mbamigi Island.

About 80% of the nation's population live between these two urban centers.

The Mbamigian diet traditionally includes an abundance of seafood.