Norjihan, officially the Serene Republic of Istaðan is a sovereign state situated in Ekuosia. It borders the Algazi Union to the west, Azerin to the north, and the Gulf of Ishenar to the south, where many of its island possessions can also be found. With a population of around 21 million, the country is one of the less populated in Ekuosia, as well as it having a relatively small economy. It is a major player in the politics of the Ishenar region due to its historical ties and role.

In order to become naturalised as a citizen of Norjihan, the following requirements are necessary:

Once these conditions have been met, an applicant is then given partial citizenship of Norjihan for one year, during which they do not have the right to take part in elections or any other political processes, and can't receive state benefits. This partial citizenship is lost if the applicant commits any form of crime at all. It can also be rescinded at any time by the government in the case of national emergency or war with the applicant's home country. After a year, they are then granted full Norjihani citizenship, but are then required to spend 3 years as an army reservist, and can be called up for military service at any time (mainly for border services). For the children of a naturalised citizen to be given Norjihani citizenship at birth they must be born in Norjihan, or else a waiver must be applied for (which can be rejected).

No preference is given to the descendants of Norjihani emigrants.

Religions in Norjihan as of the 2010 census

Norjihan is a deeply religious country, with over 90% of the country professing some level of faith and over 75% of those regularly attending services or performing rituals related to their religion (Norjihani National Census, 2010). The official census states that 76% of Norjihanis follow Tanhunga, mostly the Mahadran/Norjihani sect. Quurožarq, Iovism and Pashaism make up around 14%, and 10% of the population officially classified itself as 'Irreligious or Not Currently Worshipping'. However, an independent study run by NorjiPolls found that up to 28% would say that they don't 'worship often'.

Tanhunga remains the most important and influential religion in the country, having first arrived during the Baredan Migrations and thus having always been the main religion of the states that exist in the area covered by modern Norjihan. Norjihan itself is home to some of the holiest sites of the Tanhunga faith, and Listosord is home to the Sovereign Order of Hajenired, an extraterritorial sovereign nation. Tanhunga continues to greatly influence Norjihani law, with the Tanhungara holding positions both in the Parliament and the Council of Norjihan, as well as providing 'Faith Education' (see above) and Philosophy, as well as in many cases History education.

Many religious principles are enshrined in the constitution and the law, although the country has slowly been moving towards secularisation in terms in the judiciary; for example, the government recently removed the requirement that judges be practicing Tanhungdi and pass an examination to demonstrate their knowledge of the faith. Religious crimes such as blasphemy remain technically illegal, although not enforced in practice, and many social stigmas exist surrounding irreligion, which until 1989 remained a capital offence, but which has slowly been growing in recent years. Being a Tanhungdi remains a legal requirement for work in many sectors, especially in the civil service.

Education is, up until the age of 18, a devolved matter and depends on the state, although they generally follow the 'Central Education Plan' as laid out by the government every year. For the purposes of this article, we will use the Education system of Hajenired FR, which is a general standard for the country. Education is generally split into 3 categories:

All students up until the age of 18 recieve lessons in Tanhunga scripture and practice, which the Central Education Plan states is 'a vital part of citizenship education, and helps foster a sense of community and pride in the nation'. This is run by Tanhunga priests in their temples, and takes up 2 of the 5 days of the Norjihani school week except in Uulo where it makes up one and a half, and Lailaum where it makes up two and a half. The curriculum for Faith Education is decided by the Tanhungara, based in the Sovereign Order of Hajenired, but requires the approval of the Norjihani Federal Government, and thus is open to interpretation and slight alteration by the Federal States.

Faith Education generally encompasses Religious Education, Citizenship, History and Norjihani Literature, although the Central FR and Hajenired FR choose to administer their own History education. Students wishing to carry on into a career in the Tanhungara can chosse to devote half of their PAQs (Primary Academic Qualifications) to 'Religion, Philosophy and Culture', a special PLQ taught by Tanhungara Schools, in the place of HPS (see below).

Academic Education is one of the two potential paths, alongside vocational education, that a student can go down. Up until the age of 12, a child will spend half of the time not spent in Faith Education studying academic topics, such as Norjihani, Mathematics, Chemistry, alongside other subjects including Gardening, Calligraphy, Economics and Physical Education. Up until the federal region's 'Age of Matriculation' (generally around 13 or 14) when the student chooses a pathway, it is mandatory alongside vocational education. After the Age of Matriculation students begin their PAQs, or Primary Academic Qualifications, including the mandatory Human and Physical Sciences (see below), Norjihani (or Istani in Lailaum) and Mathematics. All other subjects are chosen by the student from a range of options given by the region.

Vocational Education is the other major educational path, encompassing practical skills. These are often, although not universally, taught through apprenticeships, although in certain cases - such as Hair and Beauty or Media Studies (considered vocational in most regions), education primarily takes place within specialist schools. Vocational education is followed alongside academic education up to either 13 or 14, just like Academic education. After Matriculation, students can choose between either Vocational Colleges to recieve a PVQ (Primary Vocational Qualification) or Advanced Apprenticeships, with a range of subjects from Animal Husbandry and Agricultural Studies to Engineering are available. At age 18, vocational education joins the national stream just as academic education does. As different regions offer different vocational options, some choose to carry on in academic education until 18 then take a NELA (National Educational Level Apprenticeship, more on these later).

Human and Physical Sciences is a general term for a collection of Arts and Science topics, and the modules available depends on the federal region in question. It is a necessary part of the academic education for students after the Age of Matriculation up until 17 or 18 years of age (ie. they take it as a PLQ). Depending on region 3 or 4 subjects are chosen; students can chose to focus in 1 or 2 dependent on the overall number they are allowed to take, and then have 2 'supplementary' subjects. In general, however, typical modules included in HPS - these vary by region - include: 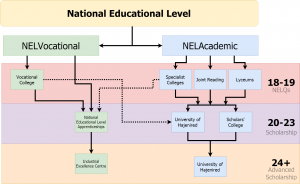 The National Education Level, with the 3 qualification levels and institutions which offer each

Those who have studied at a Vocational School at PVQ level take an NELQ (National Educational Level Qualification) at a Vocational College, and can then go on to take a NELA (National Educational Level Apprenticeship) or study at the University of Hajenired like Academic students, although the range of subjects they can study is severely limited; last year, students who had taken PVQs at Primary level made up just 1% of all students, nearly all of those either on an Economics or Engineering course. Those who opted for an Advanced Apprenticeship at PVQ level can opt to take a NELA if they so wish, but there is no obligation for them to do so. Those who have taken an NELA can then proceed to study at the Industrial Excellence Centre and recieve a qualification equivalent to an Advanced Scholarship in a series of Applied Engineering and Business Management courses, although not many choose to do this.

Those who chose to take a PAQ have three options at NELQ level. They can go to a specialist college which focuses specifically on one subject they want to take, such as the School of Physics at Myski, or the School of Historical and Cultural Studies at Tel Duvemuz, and recieve an NELQ in that subject. Some Specialist Colleges offer courses which allow students to then opt for a NELA. You can also go to a Joint Reading College, in which you take an NELQ made up of two subjects, either focusing on one or doing both equally. Lyceums, meanwhile, provide a 'build-it-yourself' NELQ made up of many modules from different subject areas, allowing for a greater flexibility of course. You can then go on to take a Scholarship either at the University of Hajenired or at a Scholars' College. The University of Hajenired is the country's only 'University', providing Scholarships in a wide range of subjects including Foreign Languages; you can't study a Foreign Language within the education system beforehand, and certain can't be studied until Advanced Scholarship level. Scholars' Colleges provide an Advanced Scholarship with a similar structure as a Joint Reading NELQ. Those who wish can then choose to take an Advanced Scholarship at the University of Hajenired, the only place that can offer Advanced Scholarships.

Logo of ORIS, the governing body of Reannangis

The most popular sport in Norjihan is the equestrian sport of Reannangis, which first emerged in the country during the 12th century as part of a series of training exercises for the cavalry of the various Norjihani chiefdoms. Reannangis first became popular as a recreational sport during the late 17th century amongst the nobility, and the sport was first codified in Tel Duvemuz in 1753 by the League of Gentlemen of the Horse, a group of noblemen and cavalry veterans. Nowadays, the headquarters of the International Reannangis Federation (known as ORIS, from the Norjihani Onsafioskin Reannangismu iðan Safnonsiobsir) are based in Tel Duvemuz, and the sport remains the most popular in Norjihan.

Logo of the Norjihani Football Association and the national team

Football has been rapidly growing in popularity in Norjihan after its introduction following the fall of the Vadini dictatorship in the 1980s. Since then, the Norjihani government has given high levels of funding to the Norjihani Football Association (Norjihani: name), which has drawn criticism in recent years due to a percieved lack of success. The NFA has been encouraging football at the grassroots levels, having established a large league structure from the National League, to the various regional and local leagues. Football was recently added to the sports curriculum and ratified by all of the federal regions alongside Equestrian sports and Athletics, seen as a major victory by the NFA.

The National League (Norjihani: Name) is the highest level of competitive football, consisting of ten teams. The most recent winners are Listosord FC, who have won the league 14 times since it begin in 1990, well above their nearest competitors; Ronyg Warriors have won 5 times, Listosord Temple 4 times, FC Myski 3 times, and Tuuhajen Fire and Tel Duvemuz United have both won once. The Norjihani football season lasts from March until October.