Notzel was initially created by local tribes and city-states in Egeria and surrounding areas to counter the expansion attempts made by neighbours from the north during the 5th century. Initially, it was a confederation of city-states, which later developed into a federal republic.

For a long time, Notzel was a confederation consisting of several republics of Egeriac people (and later countries of the Rivkh people on the Rivkh islands), it was only unified into a federation republic in the mid 19th century.

Before the mid-20th century, Notzel had a lot of military conflicts with its neighbour in the north. The last and the most serious conflict that Notzel was involved in was the GEW. Initially Notzel intended to be neutral, but the invasion from the Unity-sided countries forced them to join the Allied side.

Formation of the Federation

The coastal area and the northern areas have a Mediterranean climate; while the south has a humid temperate climate.

Notzel is an origin of a variety of economically important plants like onions, garlic, spinach, pistachios, peas, lettuce and hemp.

Notzel has always been a republic since its formation, it is a directorial republic, it has no single president but a college of several people who jointly exercise the powers of a head of state and head of government. The National Committee of Notzel, which consists of 9 members and has existed since the midle ages, serves as the collective head of state and government of Notzel. The term of the National Committee is 5 years. Notzel has a long tradition of having a collective head of state, the first constitution was written in the 19th century, but collective leadership had existed in many predecessors of Notzel for centuries before the first constitution of Notzel was made in the mid 19th century.

Notzel has a bicameral parliament with 388 members in the House of Commons. The term for a legislator is 5 years. 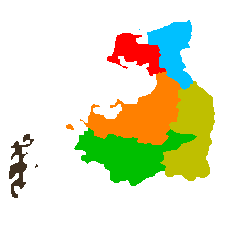 Notzel is a continental country, and is not far from major land powers in Ekuosia, and it has always had challenges from neighbouring areas on the land, which means it will put its main focus on the land to defend any possible invasions from the land, as a result, Notzel has a relatively large army compared to its navy and is more a land power than a sea power; however, the navy of Notzel still maintains some capabilities to perform regional offshore coastal defence.

For all stable societies, it is necessary and fundamental to guarantee the safety of all its members in the sense that virtually all members of the society, regardless of age, sex, gender, social status, etc. will live until the day they die naturally of inevitable causes of death, there's one of the few exceptionless rules in the human world and no societies that ever existed could break this rule, societies that have human sacrifice would be either highly unstable, or such practices would affect only a small minority of people or non-members[1]. All laws or social rules that conflict with the need of this will inevitably be nullified within one or two generations, by either being outwardly abolished or by being highly distorted or ignored to the degree that such rules are practically ineffective, therefore, human rights are one of the central issues of all societies and countries in the world.

Due to the shortage of available energy sources in Notzel during GEW and in 1950s, the government of Notzel launched a programme to develop plant-origin ethanol as an alternative source of fuel for motor vehicles, after decades of efforts by scientists in Notzel, nowadays biofuel has become a main energy source in Notzel.

In modern times, the use of biofuel and other renewable energies has become a major focus of Notzel science and technology, this is due to the fact that in Sahar, peak uranium has become apparent in recent years, and the emergence of peak uranium is due to the fact that many countries in Sahar use nuclear power as the main power source, which inevitably accelerates greatly the depletion of uranium in Sahar.

Notzel has a high literacy rate, the literacy rate is around 99%-100%. Education in Notzel compulsory at the elementary and lower secondary levels; however, most students continue to high school and college, with more than 90% of the population having at least a high school diploma. Around 25% of high school graduates go to college each year. The mean years of schooling are around 14 years.

For tertiary education, most colleges and universities are public.

Notzel is largely conservative cultural wise, at least when it comes to sex and recreational drug use. All kinds of recreational drugs are illegal in Notzel, and Notzel also bans the use of alcoholic drinks; also sex before marriage is illegal and morally deplorable in Notzel.

On the other hand, public buildings, like temples and government buildings, are made of stone and bricks regardless of area.

There is no official national anthem for Notzel.

The modern music industry in Notzel has always been thoroughly commercial.

Notzel has a native film industry, it has one of the oldest film industries in Sahar. Unlike many film industries, Notzel has enjoyed little to no direct government support, through either subsidies or import quotas. It has always been a thoroughly commercial cinema, concentrating on crowd-pleasing genres, like comedy and action, and heavily reliant on formulas, sequels and remakes.

Animation from Gfiewistan, Lhavres and Lenezan has gained popularity in Notzel in recent years.

Cuisines in Notzel are meat-oriented, local people value meat highly, mutton is an important part of the traditional cuisine. Meats of pigs and rodents are traditionally shunned by most peoples in Notzel. Due to the abundance of maize and sorghum, bread made of cornmeal is popular of the area, corn pones (a kind of cornbread that does not contain milk or eggs)[1] are traditionally the staple food in Notzel.

Leeks, onions and garlic are used extensively in local cuisines; besides, as maize is readily available in Notzel, corn syrup is very common in Notzel and has been regarded as the main sweetener source in Notzel.