The Old Tekaunye syllabary is the first writing system specifically adapted to the Mañi language. 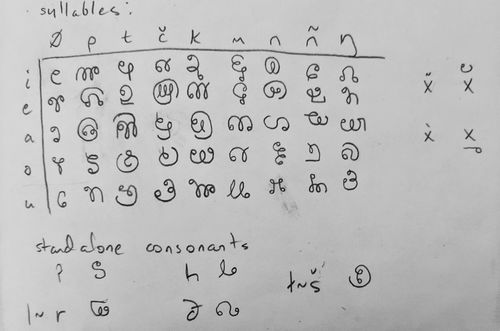 The phonetic value of the glyphs in this syllabary are not derived directly from the phonetic vowels of palm-leaf Terminian, nor are the glyphs. It is most likely that the Old Tekaunye syllabary was invented by a scribe, or multiple scribes, who was familiar with the appearance of palm-leaf Terminian script, but not literate in it, and possibly not literate in any alphabetic script.

The much more widely used Mañi abugida is descended from the Old Tekaunye syllabary, and itself is the ancestor of most of the modern scripts of Quaxin Xun and many more in Soltenna and Akulanen.