The name Síyezan comes from Damserz Síye "people" plus -zan, borrowed from Koman, meaning "land of"

Cirnic people migrated into Siyezan from 100 BCE onwards, becoming dominant around 200 CE, with every pre-Vaniuan group being wiped out, all which survives from them being substrate words, as well as some folk stories and some scattered inscriptions using a derivative of the Ohanian script.

The west bank of the Ojasar river was a rich area for agriculture, with many sedentary settlements forming in the area. These were often desunited and in conflict with eachother before king Inyaman I unified them all mainly by military force on 147.

Inyaman's successors would go on to capture even more territories, expanding west into the desert, east into nowadays Zinsha-Vogia and north against the Bodnian states. This kingdom would reach its peak in 553, after the failure of Qasam's campaign at the battle of Biyonson. In 559, Qasam would launch his second campaign, this time succeding and taking the entire area of Siyezan by 565, converting the population to Zarasaism.

After Qasam's death in 592, Siyezan was handed out to his grandson Urijoceis, whose descendants would rule it until the late 1300s.

In 1397, the Terminian empire invaded Urijoceis Siyezan. As they struggled to mantain control, they called their Zarasaist allies, the Avicisids up north, to help them in this holy war against the Pashaist infielfs, and this war became known in Siyezan as the Dastaryeşúbo "the Blessed Expulsion". However, this backfired, after in X, an Avicisid army accidentally engaged and destroyed the main Urijoceis army, killing the king and ending the dynasty there. Eventually, the Terminians were defeated with help from the Great Horse and Siyezan was partitioned between them and the Avicisids, who would then take control of all of the country during the collapse of the Great Horde.

After many failed isolated uprisings, all of the Siyezi independence movements joined together to launch an uprising during the 1790s. It was way more successful than any of the previous ones, and despite not being able to hold main cities for long, extended guerilla warfare eventually had a huge toll on the Vos economy, and after a republican uprising, the war was ended and Siyezan became an independent monarchy in 1801.

In 1824, the Vos monarchy was restored, and one of their first moves was to vassalise Siyezan, who had no choice other than to accept as they did not have the power to stand up to Vosan, although resistance movements rose up against this, although it was futile.

In 1919, after securing Balak support, Siyezan declared independence again, starting the Second War of Independence which would last 6 years and would end in a Siyezi victory.

Siyezan is a unitary, parliamentary monarchy with a unicameral system. 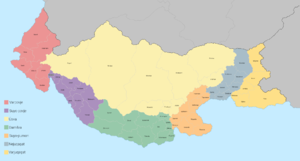 Political map of Siyezan, showing the country divided into its taryus.

The government is highly centralised on the capital, meaning the taryus hold no power on their own, but are simply used for administrative purposes. Their borders can be changed at any time.

Siyezan has maintained close ties with Vosan, being part of the Tameyvah Treaty and the Sharkunen Treaty during the Cold War.