Sropasra, born Unhisa, was a self-proclaimed prophet of the Atrarunga movement, first appearing in history during the February Mutiny (Cananganam) in the immediate duration of the 1872-73 Banana Famine. After the defeat of this mutiny, he had later spawned a religious movement under the belief that he was the reincarnation of Pasha, before later spawning another rebellion which would end in failure before his death during a gunfight with Sarsan border police.

The February Mutiny started on February 3rd, 1873, after members of the army were not paid their yearly salary. The mutiny started in the barracks of A, where they set fire to multiple buildings and established a makeshift fortification in the port. This siege did not last long as the newly re-established Cananganamese navy, whom held a rivalry with the army, brought to arms their first two ships, the Yā́ḍḍā and Samū́sā. These ships bombarded the makeshift fortification, before the mutineers gave up their arms in surrender not more than a month of the start of their rebellion. Unhisa was imprisoned like many of his compatriots, but were eventually released prior to the Calsean War on condition that they would be stripped of any noble titles and positions of government. Unhisa was unaffected by this order, but was still brought into the army to fight in the war.

Sometime in the year 1877, Unhisa started to become disillusioned with the Lunukist faith, and after meeting with a foreign observer, had learned of a prophet named Pasha who had lived in Terminia. This meeting is said to have changed Unhisa's world view where upon after deserting his post with tens of other soldiers who were like-minded, founded a religious movement to oppose the Mujansan and Cananganamese governments. His new movement promised to do away with the so-called fake idolatry of Daktuva and Kyhari, and to create a new world under the second Pasha, or Sropasra, as he had come to call himself.

The start of Sropasra's rebelliong began in the town of Kaja, where he obtained additional arms from the local armory, and gathered a band of followers under the guise of wealth for all of those who followed him to victory. The rebellion saw some initial success due to the overall situation in the kingdom of Calse, where much of their raiding took place. By 1880, Sropasra had accumulated somewhere around the range of 10,000 followers. This band continued to ravage the countryside despite the end of the Calsean War the year prior. The Cananganamese army was further tested in its ability to consolidate control over the region where upon Sropasra and his followers were forced out of the country, though some information suggests that the Daktuvan government proposed a deal in which Sropasra would be permitted to leave the country for Mujansa in exchange for safe passage.

After Sropasra entered Mujansa, he decided to set up a follower base, which would prove to be easier than in Cananganam due to higher anti-government sentiment. From 1880 to 1882, he had gained around 40,000 followers. He started another rebellion the 14th of September with the nucleus being the city of Arkefā, which would fall after a short firefight with the local police. For 3 years up to 1885, the rebellion would advance endlessly, as the military presence was not high, due to soldiers already being in use against other insurgencies, and the soldiers in the field being disloyal and many times refusing to fight, or retreating after a short engagement. 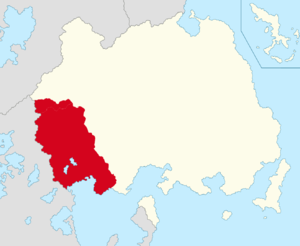 Approximate area controlled by the rebellion in 1885.

In February 1885 however, their advance would be brought to a halt by general Lysadem at the battle of the Izāreṣā river, considered one of the few major engagements of the war. This defeat denied then the ability to cross the river deeper into Mujansa, closing into the city of Ngabimā, effectively trapping the rebellion, as they could not move north through the mountains due to inexperience in fighting in such terrains, allowing Lysadem to retreat to Kyhari to force the government to become cohesive again. Lysadem was also the man who gave Sropasra the name Hâ Ṭá Tūŋ, a pun on the name "Atratunga" in Jaiso, his native languages which meant something along the lines of "one whose fist turns everything into rubble", which would get popularised after this battle. Sropasra used this time to settle his authority, state and religion, which had grown quite large by now.

In 1987, Lysadem returned to the front, now with an improved army of around 25,000 men, in order to crush the rebellion in its entirety. The rebellion had amassed around 80,000 soldiers by this time, but most were inexperienced conscripts. Lysadem crossed the Izāresrā in October, and advanced easily. Arkefā, which had become the "capital" of the movement was liberated in late November, after the biggest engagement of the war. Fearing full defeat and capture, Sropasra ordered his soldiers to go guerilla.

For the next 2 years, Sropasra would evade capture as he and his guerillas made their way north to escape into neighbouring Ukutunajas and Sarsa. In March 1889, the last bastions of the rebellion in Mujansa would surrender, after 7 years.

As his movement waned drastically in power after being expelled from Mujansa, many of his followers became disillusioned or fell into banditry throughout the jungle as he guided his followers north. Eventually he and his followers would establish themselves in the village of . The locals were forced to enslave themselves to the will of Sropasra, who did not tolerate this for long as one of the children had escaped the village and managed to travel 40 kilometers to warn the nearest police station of the Atrarungan presence. On February 13, the Sarsan border police had arrived to gauge the situation and see what could be done, only to be attacked by Sropasra and his followers. The gunfight lasted several minutes before Sropasra was mortally wounded. He would survive only five more days where upon his followers cremated him alive to prevent the Sarsan army from capturing him. The movement would not last another 20 years as it fell into obscurity and became a taboo topic within teaching institutions in the countries of southern Nagu.