Fashion is considered an important part of the international identity of Tabiqa and is an economically important sector in the country. Due to its inherently highly multicultural demography, Tabiqa is home to many distinct traditional styles, reflected to this day in modern dress.

Mehyaran is considered one of the fashion capitals of the world , and is home to several internationally recognized fashion design firms from luxury or haute-couture brands to affordable everyday wear and everything in between.

The Osuri, Kasingadhi, and Kudzati styles all represent the traditional clothing of non-Adzamic ethnic groups, while the Avolūri, Mehyarani and Adunjadi styles are all Adzamasiin or other Adzamic groups. The three Adzamic styles do share a number of features in common, moreso than the other three, although there are also a number of similar elements in the Kudzati and Kasingadhi styles. In most styles, most garments are completely unisex, with little to no variation in cutting or fit for the different genders, except where needed. There are exceptions, however, among the Kudzati and Kasingadhi styles, and some Avolūri sub-styles.

These three styles are thought to be derived from a single original Adzamic style, and share many features in common, especially those of practical considerations for desert-dwelling peoples. All three tend to involve loose, flowing garments made of lightweight, breathable, woven fabrics; the entire body is covered, including most of the face; in rest positions, the hands are typically covered by excess drapery, as well.

Garments are cut similarly, regardless of gender, especially if not tailor-made for an individual. The typical outfit is in four parts (excluding shoes and undergarments): the kelixi, ālixi, qalan, and jāko.

The kelixi, or trousers, are the garment for the lower half of the body. Trousers are preferred to skirts to help deter chafing wind and sand. In each tradition, the trouser leg is fastened relatively tightly around the ankle, before expanding out to a much looser sleeve for improved breathability. The trouser typically comes just up to or sits just below the waist. The ālixi, or shirtsleeves, is the upper-body counterpart to the kelixi; fastened at the wrist, the rest of the sleeve up to the shoulder is typically roomy. In the Adunjadi style, the shirtsleeves are actually two separate, paired garments, more analogous to socks; in Avolūri and Mehyarani styles, the two sleeves are connected with a short back, and sometimes front, making it a partial shirt. (The back and front are typically much shorter than the sleeves, only covering the shoulders and perhaps the upper chest.) Avolūri and Mehyarani ālixi are worn underneath the tunic, while the Adunjadi style is typically worn overtop and fastened to it from the outside.

The main garment is the qalan, or tunic, and this is one of the garments that differs the most between the three styles. The Mehyarani qalan a long, sleeveless vest, which comes down nearly to the knee; the arm holes are quite large, requiring a reasonably-sized ālixi to be worn underneath, or a particularly voluminous jāko overtop. The Avolūri style tunic is usually slightly shorter, and has its own very short sleeves (5-20cm), as well as a small turtleneck; the collarbone and shoulder area is typically highly decorated with clasp points for the two shirtsleeves to attach to. The Avolūuri style qalan is something nearly midway between a vest and a poncho; a single strip of fabric encircles the wearer from the neck to the elbow or lower (at the sides) and waist or crotch (in the centre), with the the bottom edges sown together under each arm to create a sort of long, very broad sleeve, helping to ensure that the otherwise very loose garment does not get unnecessarily caught in the wind. Due to its radically different nature from the other two styles, the Adunjadi version of this garment is sometimes not considered a qalan at all, and instead called [something else] instead.

The final piece of clothing is the jāko, or headscarf. Adzamic people traditionally wore a garment that covered the entire head, neck, and shoulders, leaving room only for the eyes, and which could be unfolded to uncover the rest of the face in favourable conditions. In some cases, a very thin—preferably sheer—veil was also available to pull over the eyes in particularly poor weather. The jāko, like the qalan, differs more notably between the three styles than the other two garments do. The Mehyarani jāko is a simpler garment, conforming to the wearer's head by specific folding and tying methods, and of the three, is most likely to lack a dedicated eye or face covering. The Avolūri jāko is a more complex garment, typically consisting of multiple pieces of fabric stitched together instead of one long scarf. It has more options for being tied in different positions and styles, allowing it to be worn fairly close to the skin (also generally allowing the decorated qalan chestpiece to be shown off) or to be more loose and concealing; and it nearly always has semi-separate face (and sometimes eye) coverings. The Adunjadi jāko represents a halfway point between the other two.

Colour symbolism was important to the early Adzamic people, and plays a role in their clothing as well. Those who could afford to have their clothing dyed (in part or full) or decorated with coloured beads, feathers, shells, etc, would do so. The four genders each have an associated set of colours; śeen with warm, vibrant colours like red, yellow, and orange; rukraan with pale, light colours, like white, tan, or light grey; letheen with dark, drab colours, like black, dark grey, or brown; and benthi with vibrant, cool colours like blue and green. Due to the scarcity and costliness of dyes and decorated clothing, however, many people could not afford to have coloured clothing, and as such, simply wore the natural colours (often convenient for rukraan).

One of the key differences between the three Adzamic styles was ornamentation. The Avolūri style qalan required a certain degree of intricacy by nature, and the clasp area was often the centrepoint for artistic expression in the garment. The clasps could be formed of woven materials, or involved beads or other items sewn onto the garment. The other two styles tended to show ornamentation through patterning—whether in textile colour or weave patterning. The Mehyarani style was also known for adding decorative tassels, ridges, or lace to the edge of its garments.

The shoes were typically slippers or sandals. 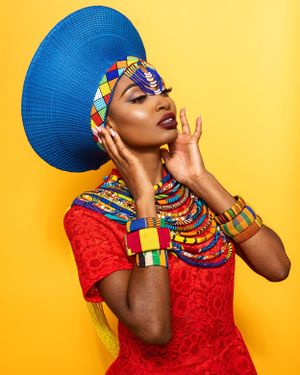 The name Osurekõ literally translates to "colourful people," and this is in reference to their long-held dedication to wearing (and building in) brightly coloured materials, with strongly contrasting colours and patterns, wherever possible. Traditionally, this indicated large amounts of bleach white, pitch black, ochre red, ochre yellow, and ochre brown, with only occasional highlights of brighter colours infused through ornamental stones, feathers, fresh or dried flowers, or expensive dyes. Vivid reds and blues are most sought-after.

The traditional Osuri styles made use of a broad variety of natural materials, including plant-based textiles, but also leather, bone, tooth, ivory, shells, feathers, and scales. Polished stones and wood could also be included.

Traditional Osuri garments were often more complex in their composition than Adzamic ones, but the overall outfit was typically simpler, with only one mandator piece (minus footwear): either a siḿá or sĩpẽ. Optional pieces could include any of the nédu, lusú, jerí, and ɂalán.

The siḿá (/siʘ̃ɐ́/, pl. siḿé), a dress or robe, is the main garment, covering the chest and legs. It comes in different lengths depending on function, with a mid-calf length being typical for most daily usage, and longer forms existing for marked occasions. In some cases, a particularly short siḿá—usually covering the crotch, at least, but not always—may be accompanied by a nédu (separate skirt), which are typically held on with a belt. Most siḿá are sleeveless or have only very short sleeves. They are often relatively form-fitting, although the skirt portion—especially for more ornamental purposes—may have extra fabric.

Sĩpené (sg. sĩpẽ) are very similar to the siḿá, but intended for more active wear such as running. The key difference is the slightly shorter and roomier skirt which contains a divider within—essentially making it a skort, or the entire garment a form of overalls. The inner slip provides protection against friction, and an extra defense against genital slippage. They are typically made from thin, breathable, stretchable fabrics and are not heavily decorated.

The lusú (pl. lusé) is a collar, closed shawl, short scarf, or short poncho, that covers the breastbone and shoulders; it may be long enough to cover the upper arms as well. This is one of few garments that is (often, although not universally) differentiated by gender, with rukraan and letheen tending to wear shorter, stiffer collars and śeen and benthiin tending towards longer, softer, more flowing garments. The lusú is entirely optional, and used to dress up an otherwise plain outfit. The seđílusu, or rain lusú, is the Osuri equivalent of a rainjacket or rain poncho, and may be markedly longer than fashion lusé.

Jeré (sg. jerí /ʒerí/) is a head covering, which may resemble Adzamic headscarves, but is typically more of a hat or turban—it covers, partially or completely, the top and back of the head, but usually doesn't cover the neck or shoulders, and never covers the face. These come in many different styles. Typically being for decorative purposes, most jeré are quite large and colourful. Two popular styles are the táqet-jerí (/tɐ́ǃ̬et/) (woven-hat), a stiff, finely-woven, basket-like hat, and the siḿá-jerí (robe-hat), an ostentatious head wrap.

ʔaláné (pl. ɂalán), is a loan of the Adzamasi qalan, with which it shares a basic shape and function. It is a large outer vest-like garment, typically open in the middle instead of one solid piece like the Adzamasic versions; it covers the shoulders, back, and sides. At the longest, they reach the mid-thigh, but typically they are significantly shorter than the siḿé they are worn with. These are usually formal garments, although purely-functional seđíɂalané (rain ɂalané) also exist. 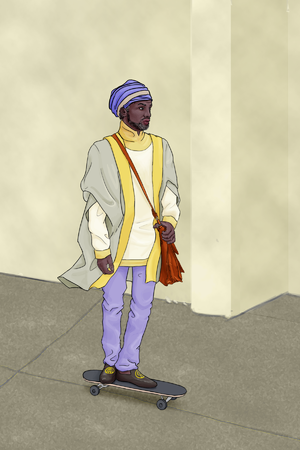 The modern styles of dress seen in Tabiqa refer heavily to their traditional and historic counterparts, while taking advantage of new fabrics and dyes, as well as cross-cultural inspiration. While many people still wear traditional dress, or clothing that is very similar in many ways, there are also unique modern styles that blend elements of the different Tabiqan fashions—and international ones as well.

Modern synthetic fibres and fabric printing presses have made colour and patterns more common and important in Tabiqan fashion. Although the Osuri remain the most visually loud and busy as a group, elements of their aesthetic are widely appreciated throughout the country (with fad phases).

Although traditional colour symbolism is still important for Adzamasiin in many formal settings, especially ceremonial and religious ones, most Tabiqiri of all backgrounds are comfortable wearing an expanded range of colours, at least in day-to-day life. Pastel tones and metallics, having no previous association, are seen as especially appropriate for all genders, and are very popular in unisex and childrens' clothing.