Tanlariewis (Gfiewish IPA: [ʈɐnɭaɹɪəʍɪʂ]) is a town and county in Gfiewistan and the central western capital of the state of Tanla, located at the lake Hewa and the river of the same name. It is widely known for being the original location of the headquarters of the Gfiewish Department of Security during the times of the monarchy. The department and especially the intelligence agencies answering to it left a considerable influence in history and culture of the town that continues to be noticeable in the present day.

Aside from that, Tanlariewis is also major historical trade hub for Gfiewish-Mermelian land and river trade, a center of clothes, chemical and food manufacturing and a popular tourist destination.

Its name is often spelled with a small t to represent the city's reputation for its famous casual self-image, however historians have shown that it originated as a justification of a typographical error.

In prehistoric times, when milling was a restricted and expensive activity controlled by the nobility and a few merchants aligned with them, farmers in central western part of Gfiewish lands would always travel to the river Hewa to have their buckwheat and millet processed in one of the many watermills located there, and then have most, if not all of their flour sold at the gradually growing markets in the vicinity, which eventually led to some traders and artisans permanently settling near market squares. The date of the first market in the region is not known, but archeological evidence shows the first houses were constructed in the 8th century. Trade seems to have expanded to reach Maponic people down the river Hewa soon after that.

The town became the seat of a major chiefdom by the 1100s, and by 1521 was openly challenging the dominance of the chiefdom of Hatariew, starting a war against it and its allies together with the chiefdom of Kauslat, headquartered in Weishriew. The war ended in a defeat for the both, and the town went into decline, as it lost much of its trade and wealth and was coerced into entering a tribute relationship with Hatariew.

The Great Unification War of Gfiewgjknsiorjgiostan that saw the Gfiewish chiefdoms be forcibly united by Brotanoda of Slakkariew in 1572 to form the Kingdom of Gfiewistan caused further destruction to many buildings, but the new king of the now unprecedently large realm chose Tanlariewis as the headquarters for the new Department of Security, which had as its task to suppress revolts and more broadly dissent, as well as expose spies and other threats to the sovereign, both from inside the new borders as well as from across the border. Located in the center, but also relatively near the border to the neighboring country of Mermelia, Tanlariewis provided a good location for the department.

Being a decent distance from the royal seat of power, Slakkariew, also was supposed to ensure the premodern “secret service agents” wouldn’t be able to turn against their employer and start spying on the king. Blackmail had been a common thing during and before the war, one the king had engaged in himself, and he had grown paranoid of becoming a target himself. 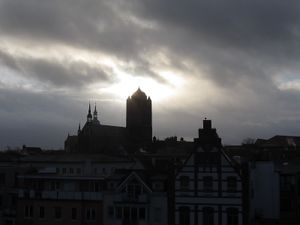 The old headquarters of the Department of Security.

Seat of the Department of Security

The construction of the headquarters for the Department of Security led to a lot of capital and workers flowing into the town, boosting the local economy and trade again and helping with rebuilding efforts, but it also had many deleterious effects on the local society and culture.

Evidence shows the Department practiced its capabilities by frequently experimenting on the local population, although official records were intentionally kept sparse or destroyed, and other writings from this time show that witnesses often seemed to have trouble recalling events or in their agitation seemed to have a tendency to exaggerate and distort, claiming the impossible, at times even supernatural had been happening.

As a result it is difficult for modern historians to separate the myths, regularly passed on in families, friend circles and among the many workers of the town for generations, from reality, and few things have become settled historical facts. Among these are that the department was the de facto government of the town, with the legal government taking orders from it and enacting them officially. It is also proven that many poorer inhabitants were pressed into service, turned against their families to make them fully dependent on the department, and then made undergo arduous training programs so as to select for those who had the abilities and mental fortitude to become spies.

Anyone who passed would begin with covert surveillance operations of all trade in the town, especially the cross-border trade with Mermelia, and then be forced to undertake infiltration missions with the wealthiest merchants, trapping them in ways to make blackmailing them by the agency possible and so ensuring the opening of lucrative revenue streams, as the kings generally expected the agency to run a shoestring budget. With a good level of income secured, more people could be recruited and better gadgets could be bought or developed in-house. Everyone who failed the spy exam would either be consigned to the workshops, or if they still had their own job to return to, but had to keep reporting back as “unofficial informant”.

One thing records indicate is that often operations required serious clean-up of the town, especially streets, and this is said to be another reason why tanlariewis became known for “wet streets”.

Further details are hard to ascertain, but the experience of working for the agency evidently left very many people traumatized, in part certainly due to the social isolation the agency demanded. It also created an atmosphere of mistrust and uncertainty in the town, where it was hard to know if someone was who they said they were. 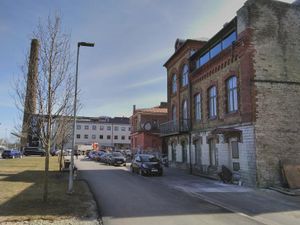 During the days of the republican revolution of 1852 the Department for Security placed the town under lockdown, making leaving or entering it impossible, and patrolling the streets with armed men to enforce a curfew to prevent uprisings. Nonetheless, after information about the death of the king in Slakkariew and the triumph of the revolutionaries there, republican forces managed to reach the official local government before department officials, preventing the town from becoming a center of a possible counter-revolution that many feared could have turned into a civil war.

The most questionable activities of the Department for Security were said to be subsequently ended with the revolution and the department headquarters moved to the new capital Hatariew. Many sites of the agency were relinquished and turned into walled public gardens and parks. However, in some way the situation remains in some way almost unchanged, since little continues to be known about the present-day activities of the Department of Security, except that it is no longer tasked to suppress dissent. Some prominent writers and politicians have taken to labeling it the “Department of Manufacturing Consent”, claiming it just has turned to clandestine activities.

In the early 20th century, with the arrival of the railway, the town underwent further changes. The milling and light industry expanded greatly and Tanlariewis became a center of trade and production for all of Gfiewistan. Its mills became the main supplier of flour for almost the entire country. Many more industries, for example the clothing, chemical and catering industry, soon clustered in various districts at the outskirts of town that are the furthest away from the lake, while a metalworking industry established itself at the shore, near the main railway station. This brought the town considerable wealth, and economic growth has largely continued over the following decades, leading to some of the oldest manufacturing districts becoming wealthy residential neighborhoods in the present day. 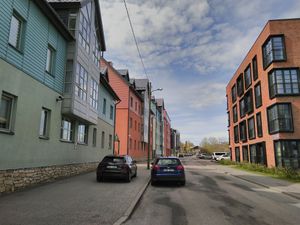 Tanlariewis is known for its “walled gardens”, or gardens surrounded by ornamental murals, painted in various colors, especially red and green, the colors of the town. Most of them are private ones, but the public ones are similarly enclosed.

Furthermore, “wet streets” not only references how in spring when snow is melting or after storms all the water often can’t run off properly due to lack of proper drainage and unpaved sidewalks, but also the canals locally named “wet streets” that form the main way of transport in the part of town located on various islands and reclaimed land in the lake. Originally fisher villages, they became a popular vacation destination among merchants and the political elite during industrialization and today they form the most expensive districs of the town, full of equally colorful villas, usually with large porches and balconies that wealthy locals and paying visitors use for vacation and weekend getaways. Slightly further away are boat houses and restaurants, but also some cheaper bars and hostels frequented by the less affluent.

The former metalworking district at the shore of the lake has similarly become an affluent residential neighborhood with various upscale cultural establishments.

The food industry with its various industrial mills as well as chemical and clothing factories remain the backbone of the city's economy. Metalworking, a previously similarly large sector, has diminished in importance, with most former plants and furnaces now serving as cultural venues and touristic hotspots. Tourism, as in many parts of Gfiewistan, is on the rise in Tanlariewis, and aside from the former metalworking districts the walled gardens and parks as well as lake islands draw in many visitors. Most tourists come for the cultural events or the lake, as despite having a rich history to draw from, the local tourism board tends to not take kindly to the existence of historical tours, preferring to downplay the history of the town and e.g. claiming the walls of various gardens and parks are only there for aesthetic purposes.