Terminian federalism is a system found across Sahar where the delegation of a region within a country to the federal government is also the body overseeing that same region. 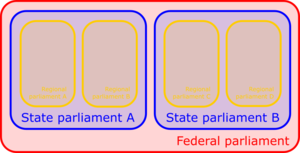 Diagram illustrating the compartmentalisation of a lower house under Terminian federalism

This results in a form of logistical delegation of power, as representatives are logically able to attend much more often to the local meetings than they are to the national assembly, thus presenting an inherent degree of lawmaking independence to the federative unit. Particularly noticeable, for example, in the late days of the Balak Empire's administration, this effect has been dilluted by modern telecommunications to an extent. An additional logistical innovation of Balak-derived variants of the system in particular is the ability for debates on the national level to be held in the regional legislatures, with votes being sent back to and counted in the national legislature's primary meeting place, allowing more frequent legislative actions.

The system originated in the establishment of the Terminian parliament in the Terminian Three Kingdoms in the 16th century as noble representativity was expanded. It achieved a more modern structure with the 1743 reforms tying it to regional landowners, but would only display democratically appointed representatives much later, after it had been adopted by foreign powers such as the Kingdom of Maram in the early 19th Century (whose institutions would in turn be inherited by the Balak Empire) where democratic reforms were conducted by Jimâşim I in 1891. In Terminia democratization occurred with the extinction of nobility in the Helsonian revolution in 1925. Terminian in origin, the system eventually spread globally, with modern examples outside of Ekuosia being the Federal Assembly of Balakia and several other countries, such as Sonka and Shohai.