Tlha Ngai (Shyorian: Ⱡôqa Ńâî /t͡ɬɜʡa ɳɒɪ/), officially the Divine Tlha Ngai Dynasty and also known as Shyoria or Shyorisaech, is a country in southeast Atsiq, bordered by Ozaria in the west and Kepeshte and Kharagirit in the north. One of the oldest political bodies on Atsiq, dating back until 600 AD, modern Tlha Ngai has its roots in the Kingdom of Shyorisaech, which merged with the Kingdom of Usuva in a personal union in the eleventh century and was absorbed into what was to become the Osveraali Empire in 1192. For six and a half centuries, the second most developed and densely populated province of the Empire was an integral part of its political structure, all the while preserving its language and culture, including its unique script. When the Empire dissolved in the middle of the 19th century, the local elites renounced the personal union with Usuva and established their own dynasty which has ruled the country ever since.

Osveraali-speaking dalar began settling the Kxe Basin as early as 500 BCE, but the first attestations of civilisation are considerably younger and date from around 300 AD. By this time, a complex system of political dependencies and domains had already established itself, with sophisticated means of food production and government based on the idea of the divinity of the ruler and, like in most Atsiq cultures, a strong social position of women. The first larger polities, unifying smaller states and moving to settle beyond their home region, had arisen by 600 AD, and by the time first contact with overseas cultures was made, most of the region had been unified under the holdings of the Ahla dynasty, whose ancestral seat had become the location of the prosperous city of Nga Kxe.

After loaning writing from the Cananas around 1000CE, the Tlha Ngai family grew to power in Nga Kxe and extended their influence outside the valley to nowadays Thaneqh. Growing in power, they established the first, and so far the only dynasty and led the formed country of Tlha Ngai, which they named after themselves, but the country is also known as Shyoria or Shyorisaech due to the original region being called that. All of the vassals of Tlha Ngai gained wealth under the dynasty due to trade and plenty of them were assimilated and incorporated into Tlha Ngai.

Shyorian, known to its speakers as Ⱡûri, is a South Osveraali language and as such related to [[Qatill language|Qatill] and Lyladnese. It is the Atsiq language with the oldest literary tradition and the oldest attestations, written in a mixed logographic-alphabetic script used nowhere else on the continent. Their language is a source of considerable national pride for Shyorians and has had a marked influence on neighbouring languages, including Imperial Osveraali. 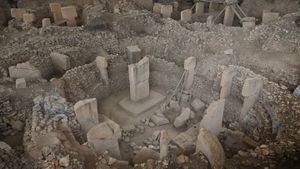 Circle graveyard which is next to the Central Circle .

The biggest circular graveyard, the Central Circle has a diameter of 30 meters, where plenty of pillars, heights ranging from half a meter to 3 meters, stand in circles. The use of the pillars are unknown but are believed to have held caskets and urns. What makes this graveyard the most interesting is the lack of bodies in the circle, 0 bones in fact. It is still a mystery to this day why there are no bones of any kind in the oldest and biggest of the graveyards in the Death Pillars. Many have blamed extraterrestrial life, grave diggers, shamans, and zombies. But the graves have been not touched after the bodies were buried, which makes the disappearing bodies even more mysterious. 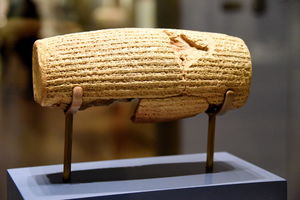 Part of a pillar with carved old alphabet .