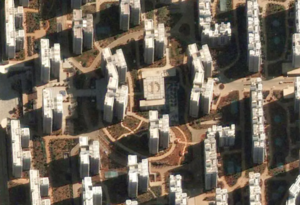 Abandoned apartment complexes in Union City, photographed in 2009 from a helicopter flyby.

The USCWS voted to move the provisional capital from Beho to a neutral location to promote fairness and equality amongst the three Supreme Communes, and naturally, the border tri-point was selected. An almost unanimous decision to construct a new capital was made in the National People's Assembly on July 7th, 1952. About 1200 km2 was allocated for the planned city.

By late 1954, most facilities had finished construction and is ready to be used. The government heavily promoted the new capital and managed to relocate almost 500,000 people. The capital had its grand opening on August 11th, 1955. As a result, Daethyun's previous status as the capital city of both the Supreme Commune of Ru and the Union was revoked.

The city saw immense growth as migrant workers sought better pay and new opportunities in the city. By 1970, the city had over 7.5 million permanent residents.

The Western Split would cause many people to leave the city, as it soon became too politically unstable. ... By 1982, the city was virtually empty, with only a select few remaining. Due to this, many national level government agencies could not function.

Union City was officially completely evacuated and sealed off on September 13th, 1982, the day of the formal dissolution of the USCWS.