As people of the country have little breakthrough in fields like science, technology, philosophy and art, it is sometimes called "The Land of Banality" by other peoples.

The name of Republic of Hux Kham is from Hux Kham, which means "the Land of the Lake/Lakes" or "Lakeland" in the Hux Kham language.

The earliest records of people in Hux Kham date back from 4000 BCE. However, the earliest records of ethnic Hux Khams came from 50 BCE, which do not match with Hux Kham people from the earlier periods. On 1200 BCE, Hux Kham saw an influx of migrating people from Baredina. The first are the Kni Yams, and then followed by the Mroksa people on 300 BCE. As a result, modern ethnic Hux Khams bear genetic similarities with these ethnic groups.

The first known Hux Khamic empire is the Mroksa Empire, whose founders are ethnically Mroksa. The empire lasted for long, until it was collapsed on 1089. Later, on the 12th century AD, ethnic Hux Khams under the leadership of Truk-sa built a new kingdom over the territory of modern Hux Kham, known as the Truk-sa Dynasty. The dynasty is the first in Hux Kham to be led by ethnic Hux Khams. This brought in an influx of immigrating ethnic Hux Khams, as they are subject to discrimination by the neighboring kingdoms.

Hux Kham's territorial borders hardly changes since the formation of the Truk-sa dynasty. Its government encouraged immigration of Proto-Hux Khams into the kingdom, thus giving a relatively high population growth for Hux Kham. Truk-sa Dynasty stood well for about 300 years, until in 1405 when the monarchy at the time was overthrown by Bang-mo.

The overthrow caused the Truk-sa Dynasty to collapse, which in turn prompted Hux Khams to migrate into the surrounding regions, with most going to the area now known as Qonklaks and Thejklaks. However, Hux Khams are then subjected into discrimination in these regions, prompting Hux Khams to eventually move out to Ebo Nganagam in Baredina. These groups are then later known as the "Sailors".

Bang-mo's rule was eventually short-lived, as his son killed and overthrew him. Hux Kham then proceeded to have 16 another short-lived dynasties until 1601, when I-mak founded and solidified its dynasty.

The I-mak dynasty is challenged by the rising idea of the "Republic of Hux Kham" in the early 19th century and the dynasty's high levels of corruption and inequality. At the time, there was a large gap between the free and tax-exempt noble class and the less free and taxed common class. This caused the common class to dissent the I-mak administration, and revolts emerge. Initially, the dynasty was still able to suppress the commoners' revolts, with one of the measures being the imposition of higher commoner taxes. However, in 1848, the dynasty was outpowered and eventually overthrown by the common class, thus ending the dynastic era of Hux Kham, and started the modern Republic of Hux Kham.

Hux Kham has a humid continental climate, that means, it has a deep contrast between different seasons, with a warm or hot summer and a cold winter, and the precipitation is well distributed, like much of the eastern Europe.

The constitutional law of Hux Kham guarantees freedom of speech and freedom of religion, and there are no known cases of human right violations by the government in recent 50 years, and it is generally agree that the government has effective control over the country.

Hux Kham is a country that lacks any military, as it has been abolished since the 12th of December, 1915. The military duties of Hux Kham, particularly on the purpose of defense, are transferred to Qonklaks on the 20th of May, 1966. The reason for this is Hux Khams' dismay over the military during the military occupation, and the fears of nobelist ideologies over the Hux Kham military.

This zero-military constitution was mentioned during the 100th anniversary of Hux Kham's abolition of the military, on 2015, when the Hux Kham former president Myah Ki-thar said "Our peace has been achieved through the abolition of the military, an organization that, in Hux Kham, has brought us with chaos. We believe that the ultimate answer to peace is with a state of zero military".

The constitution did not cause any adverse effects on Hux Kham itself, as its mountainous geographic conditions effectively prevented any danger from most world wars, including the outbreak of the Great Ekuosian War that was spilled into Soltenna. In fact, after the abolition of the military in 1915, much of the military budget was transferred for the funding of Hux Kham's infrastructural projects, notably the Hux Kham national road network.

The only legal armed force in Hux Kham is the police. Official statistics from 2017 state that there are about 7,300 people serving as the police force of Hux Kham. The use of military-level firearms, such as rifles and sub-machine guns, are banned, and as such, the Hux Kham police relies on smaller firearms, particularly pistols, for the purposes of duty. Given Hux Kham's geographic conditions and predominantly-dirt rural roads, it is not uncommon for the police to patrol rural regions with horses.

Hux Kham is a developed country, as much of urban Hux Khams live a high-standard life. Rural regions, however, given the remoteness and geographic extremes, lacks contact with industrialization.

Notable Hux Kham products are horses, automobiles, and food. Horses in Hux Kham are traditionally known as one of Sahar's best horse breeds. Hux Kham is also notable for its growing automobile industry. However, agriculture remains one of the dominant contributors of Hux Kham economy, as Hux Kham's high agricultural output as well as technological advents made it one of the largest producers of food per capita and one of the largest exporters of food in Sahar.

A car by KingEn, a Hux Kham automobile company

In the 1950s, Hux Kham experienced a period of rapid industrialization. One of the fastest growing industries in Hux Kham at the time is the automobile industry. The period saw Soltennan auto companies finding countries with cheap labor for their automobile manufacturing facility, and Hux Kham became their ideal location. In the process, the transfer of technology saw rise of Hux Kham auto companies, like KingEn.

These rapid industrialization brought economic growth with it, on both sides. Foreign companies expand, and Hux Kham turns into a developed country. The rapid economic growth declined in the 1970s, as average wages significantly rise and local demands for certain industries, like automobiles, fall. This opted both Hux Kham and foreign companies to move out of Hux Kham, expecting lower wage rates and larger markets. Consequentially, much of the companies that used to house in Hux Kham left the Hux Kham market almost entirely, in favor of countries like Algador, and in rarer cases, Myak Kham.

According to official statistics from 2016, there are around 4.5 million tourists visiting Hux Kham every year. However, the numbers often stagnate as tourism economy in Hux Kham is often viewed as "not promising", and the fact that Hux Kham's tourism sector is challenged by larger, neighboring countries. The government has plans to expand tourism in Hux Kham as a part of the government's "economic diversification".

Traditionally, Republic of Hux Kham is seen as a homogenous country by most of its people, but as more research has been done, this claim has been challenged, especially after the fact that Hux Kham people once had a large-scale intermarriage with other human ethnic groups in Western Miraria has been found.

Besides Classical Hux Kham and Modern Standard Hux Kham, there are at least two dialects of the modern Hux Kham language:

Most people in Hux Kham follow local traditional belief, however, about 1% of the total population practise Iovism, and Hux Kham also has one of the largest Iovist community outside of Baredina. Iovism was introduced to Hux Kham during 1850s, because or the Iovist genocide happened during 1850s-1920s in Myak Kham.

Compared to many countries, there are less famous Lakelanders worldwide, and thus the Republic of Hux Kham is sometimes called "The Land of Banality", probably it's partly due to its historical insignificance in Miraria and Sahar (except for some immigrants to Baredina), however, Hux Kham has its own language and its own culture. 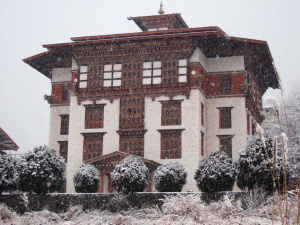 Hux Mlak Old Library, which shows the typical architecture of the Republic of Hux Kham

Ze Uh, the Book of Knowledge, is one of the earliest written literature creation of the Hux Kham people, it records mythologies, beliefs, early history and various kinds of knowledge of the ancient Hux Kham people.

A famous Hux Kham cuisine is called "Fried U Po", which is a kind of fried dough originally made in the shape of the face of U Po.