War of the Vogian Succession

The War of the Vogian Succession was a regional Vaniuan dispute over the inheritance of the Vogian throne. Fought primarily between Balakia and the Anti-Zonkamâ forces. The war was originally contained to Vogia but gradually expanded outwards as more countries grew weary of Balak power in the area.

The Vogian House of X had been unstable for many decades, inbreeding and constant scheming between members caused a general decrease in the amount of members, leaving only a handful by the 19th century. In 1867, an outbreak of X swept through the capital, leaving most of the royal family dead, and the king in poor condition. The king later died after being struck too hard during a sparring match, and the country was left with no clear heir. This interregnum forced the prominent nobles in Vogia to meet and decide on a new king. They spent over 3 years bickering without coming to a conclusion, leaving Vogia to suffer under the leadership of a poor governing council. Eventually, two very prominent nobles, X and X decided they'd had enough. They found that a Vogian princess had been married to the King of Zondush several decades ago, and had two sons. They approached the younger of the two sons, X, and begged him to take the throne. X agreed on the condition that the Parliament of the Balak Empire approved the decision. X 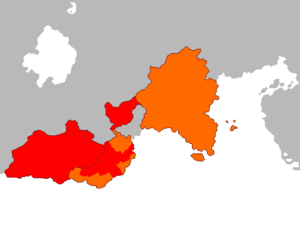 An anachronistic map of the war, with Zonkamâ supporters in orange, and Anti-Zonkamâ forces in red.

Initial Anti-Zonkamâ were very strong, with the Pro-Zonkamâ forces in Vogia losing much ground and being forced to hole up in Şimuşl and wait for Balak support. The Anti-Zonkamâ forces, aided by the Zinshans, were able to sweep city after city in Vogia, with little to no resistance. When a Balak landing force finally came in X, the war situation was grim, and there were little to no supply lines, as the Balak navy had not been fully modernised yet. The Balaks first fought the Anti-Zonkamâ forces at X, where after a bloody battle, both sides were forced to withdraw. X

In 1874, the Balak Empire declared itself the true successor to Ashar's Empire in the Shozasan Proclamation. This event started a flare of pan-Zarasaist rebellions in Anti-Zonkamâ territory, as the Anti-Zonkamâs were viewed as unholy Pauegist occupiers(?). The Kingdom of Rashtun, having declared support for the Koman claim to the legacy of Ashar, officially entered the war on the Anti-Zonkamâ side on [date], fuelled primarily by the proclamation and the state's long-lasting rivalry with Vogia, but also in an attempt to regain its lost prestige. X

End of the war

The war marked the end of any remaining political sway and prestige the Kingdom of Rashtun once had. The country would subsequently experience popular uprisings, be defeated in the territorial [TBD] War by the state of Qabashan, and ultimately be subsumed into the Koman Imperial State in [year].